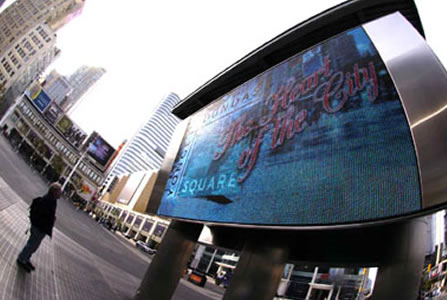 Year Zero One is pleased to present TRANSMEDIA :29:59, a year long exhibition on the pedestrian level video billboard at Yonge-Dundas Square in downtown Toronto. Launched August 1st 2005, TRANSMEDIA :29:59 features one minute video works 24/7 every half hour on the 29th and 59th minutes. Featured for the month of December is Gwen MacGregor’s ‘3 months – New York, Toronto’ and David Crawford’s ‘Stop Motion Studies’.

Gwen MacGregor’s ‘3 months – New York, Toronto’ is a one minute animation that is the first in a series using GPS technology. It tracks 3 months of MacGregors activities in New York and Toronto. As the work progresses each day is drawn and then fades, leaving a faint trace. Over the one minute the layout of the 2 cities unfolds as MacGregor goes about her daily activity. This piece continues MacGregor’s interest in the perception of time in the ordinary and mundane moment.

David Crawford’s ‘Stop Motion Studies’ extends his long-standing interest in narrative and, in particular, looks at the subway as a stage upon which social dynamics and individual behavior are increasingly mediated by digital technology. As one of the most vibrant and egalitarian networks in our cities, subways bring people from a wide range of social and cultural backgrounds into close contact with each other. This process plays a significant role in shaping both the character of a city as well as our individual identities.