Preserving memories for the future. The project “Archive for change” 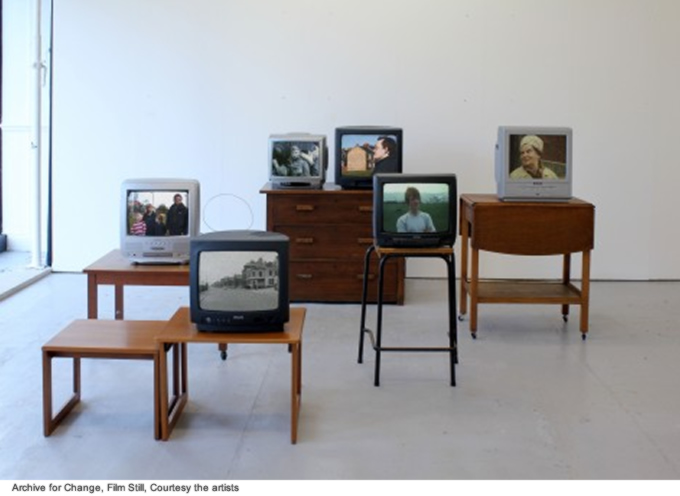 Archive for Change is a project initiated by the artists and filmmakers Julie Ballands, Taryn Edmonds and Laura Maragoudaki in 2010, which had the aim to explore urban and social changes in Newcastle upon Tyne (UK). The project is actively supported by the local community and its organizations, because it investigates directly the constant process of transformation of the city, taking Newcastle’s West End as a case study.

As they declare: “Although the history of Newcastle’s West End is unique, it echoes the path of other post industrial towns, and one thing is certain: people have continued to live their lives, build communities and hold onto their roots and memories. Archive for Change is an attempt to celebrate and preserve those stories for years to come”.

The artists took into consideration the process of ‘regeneration’ of a specific city – Newcastle upon Tyne – but similarities can be seen all across the UK. They started to analyze how the urban landscape has changed due to industry developments from post-war to the present, coming into the conclusion that most of the time people were forced to leave their houses.

Archive for Change is a collection of new and archive films that are generally displayed as video installation, but also available online at www.archiveforchange.org. In this way the archive is a resource at multiple levels. It could be used as a tool in order to foster discussions among the community and to generate a sort of activism, in this case, in preserving histories.

The latest presentation of the project was during This Is Not A Gateway (http://www.thisisnotagateway.net/) an independent festival directed by Deepa Naik and Trenton Oldfield. The festival considered cities as the main focus and took place in London last 26th and 27th January at the Bishopgate Institute. 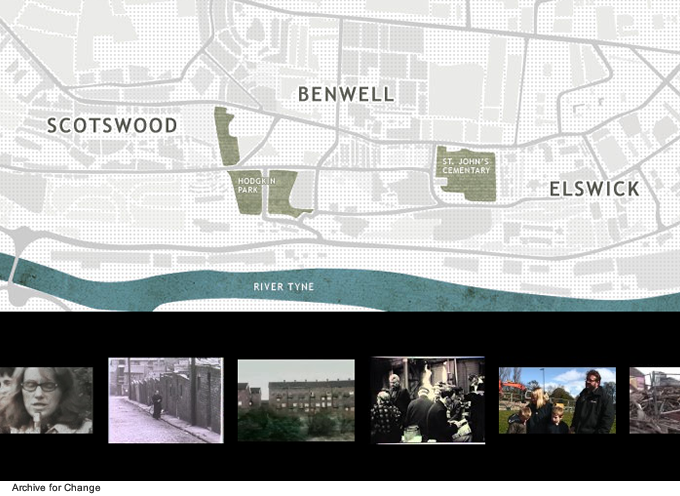 Alessandra Saviotti: Why did you choose to focus on Newcastle upon Tyne?

Archive for Change: We all live and work in Newcastle, and the project gradually developed out of our own personal relationship with the West End, and the specific neighbourhoods of Scotswood and Benwell (Julie lived in the West End for 20 years, while Taryn & Laura still live there).

Newcastle’s story is intricately linked to the rise and fall of the traditional industry along the River Tyne, and in this way it’s similar to many post-industrial cities around the UK that are undergoing this kind of widespread regeneration. However while the city centre has attempted to reinvent itself as fusion of culture and business in order to attract new capital, many of the redevelopment programmes proposed in the areas for the outskirts have failed. In Scotswood the current regeneration programme has been ongoing since the late 1990’s, and has involved a drastic clearance action to demolished a significant proportion of the neighbourhood (over 1,000 homes were compulsory purchased and knocked down). This programme is one of the largest regeneration sites in the UK. For a long time when you walked around Scotswood you would just see streets of boarded up houses, some in a state of semi-demolition, and then in other occasional houses some were still living. We started thinking about what might have happened to this area and what must it be like as a resident.

Alessandra Saviotti: How was and is, the reaction of the local community to the project?

Archive for Change: Prior to developing Archive for Change, we all had individually worked in the area and had made short films with residents about their regeneration experience, so there was already a genuine connection there. We also had friends and professional contacts who lived and worked in the area, and this was another way to gradually make contact with more people.

Our ethos has always been to collaborate closely with people, and to ensure they can participate as they want to. We made clear that the rights to the films, we’ve made with people involved, stay with those individuals, and we worked closely with people during the editing process to ensure that they were happy and the films were accurate representations of what they wanted to say. We’ve also been keen, throughout the various stages of the project, to showcase the work within the local area so people can see and evaluate the direction of the project. I think these approaches have ensured that the general response has always been positive. Also the regeneration has been ongoing for so many years and has taken so many different forms, that it is part of the daily lives of people who live and work in these neighbourhoods – it’s a conversation people are used to having. 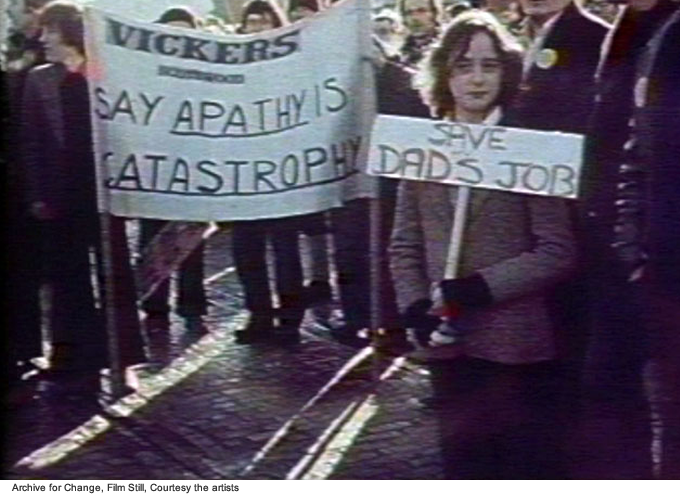 Alessandra Saviotti: I saw some of the films you presented in London during This Is Not a Gateway festival. Some are more historical, some are fiction and some others are documentaries. Did you follow particular criteria in selecting what films to screen?

Archive for Change: All the films are documentaries, and the films shown in the exhibition are a selection from the wider collection that include a range of shorts dating from 1908 to present day. The films have come from a number of different sources including national and regional film & TV archives, local community organisations, and resident’s personal collections. We also set out to find and interview people whose stories hadn’t previously been recorded, such as local community activists – people who had been proactive in instigating positive change in the area at a grassroots level. With so much displacement due to the demolition, we felt there was a danger of this material getting lost and these stories being forgotten; therefore it was clearly a need to be preserved and reflected on as a means of discussing the future.

For the exhibition we chose films that would provide a balance between historical background to the area as well as more intimate first person stories and experiences. All the films are preserved as individual shorts in order to allow for the complexities of the different voices and opinions to be heard, and viewers are invited to dip in and out of the different films and move between them in any order they choose, so to experience the story of the area from many different perspectives.

Alessandra Saviotti: Do the films change every time you present the project?

Archive for Change: There are about 50 short films in the collection, and we’ve had quite a varied output over the course of the project, including showcasing the films to local community groups with particular interests, discussing the work with relevant University departments (such as Urban Planning and Media Production) as well as more artistic exhibitions. We’re considerate about selecting films depending on the situation, and we try to show things that are relevant to the context. However, it’s important to note that all the films are available on the website, where we always direct people to go, so that they’re able to choose what films they want to watch in their own time.

Regarding the films shown in the installation at This Is Not A Gateway, we selected these carefully on the basis of what they would be engaging for an audience unfamiliar to Newcastle’s West End, and – while they reference places and issues particular to that geographical locale – they are also reflective of a wider story about urban regeneration in post-industrial cities. 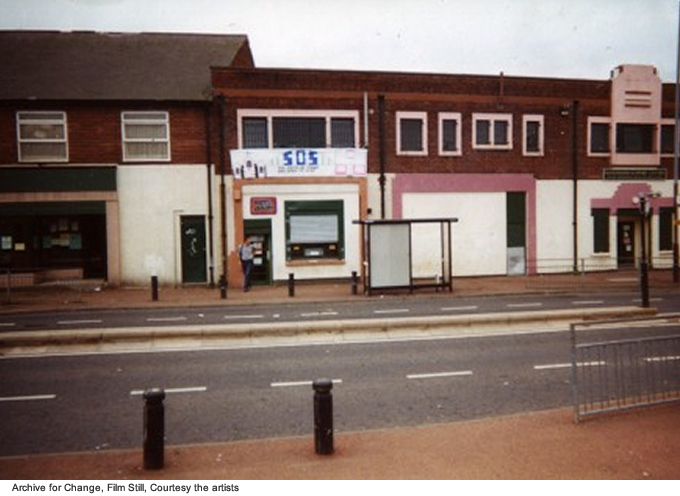 Alessandra Saviotti: In my view your project offers two really important aspects: the digital one, consisting in the online archive, and the material one, consisting in the installation. I think this project is a good example of how a digital artwork can be presented also in a more institutional place, for instance. Which is the function of the website in the conception of the whole project?

Archive for Change: The online side of the archive is the main home of the collection; all the films are housed there and they are contextualised with text, maps and imagery. It’s been designed in such a way to present the films in a non-linear format: the audience can view films connected to different neighbourhoods via the interactive map, or by themes that the films address, or by the date when films were made or refer to. The website is also able to connect with a much broader audience. As a result of its online presence, people who used to live in the area have been in touch to share their views and have contributed with new material. We also feel it’s really important that the films are projected beyond the local area, that these stories can be accessed and not hidden or forgotten.

The digital and material forms of the project constantly merge with each other. The installation is another way for people to come in touch with the stories, and it works particularly well in settings where people gather in real-life, such as the art galleries, community venues or a festivals. There’s something intimate about putting on the headphones and listening closely to the stories expressed in the films, so I think this is an important format for the project.

Alessandra Saviotti: Do you think that this project could be reproduced also for other cities?

Archive for Change: We’re aware of similar projects in other cities, such as I Am Here by Fugitive Images documenting the Haggerston Estate in East London, and Laurence Cassidy’s project Retracing Salford. They all work closely with communities facing displacement through regeneration, and use a variety of digital media such as film, archives, images, audio and web to communicate these stories to a wider audience. So our practice and way of working is definitely connected to a wider example of socio-cultural creative activity that is currently practiced by other artists, filmmakers and activists.

We don’t have any plans to replicate this approach in another place, mainly because the process behind this project is rooted in a long-term personal connection with this area. Whilst there might be the opportunity to work in a similar way in another location, we wouldn’t want to parachute this exact project model into another city, as working with people has to be genuine. 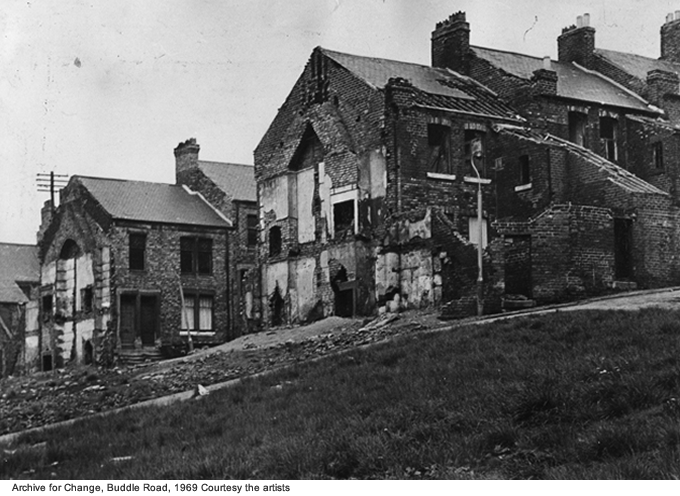 Alessandra Saviotti: Are you still working in collecting the archive?

Archive for Change: Yes, the project is long-term; we’re always on the look for new films to add to the collection and for opportunities to exhibit the work. This phase of the project has focused on establishing more long-term ‘legacy’ in the local area. We’re aware that the story of the area is still unfolding and it’s not realistic for us to imagine we’ll always be around to document new events, so we’ve been running activities such as filmmaking training courses for residents and local workers who are particularly interested using video as a tool in the community. We’re also partners in the development of a West Newcastle Centre for Heritage and Culture, and in the future the archive collection will have a permanent home there. So hopefully Archive for Change will continue to grow and change alongside the story of the area in the same way that it’s evolved.