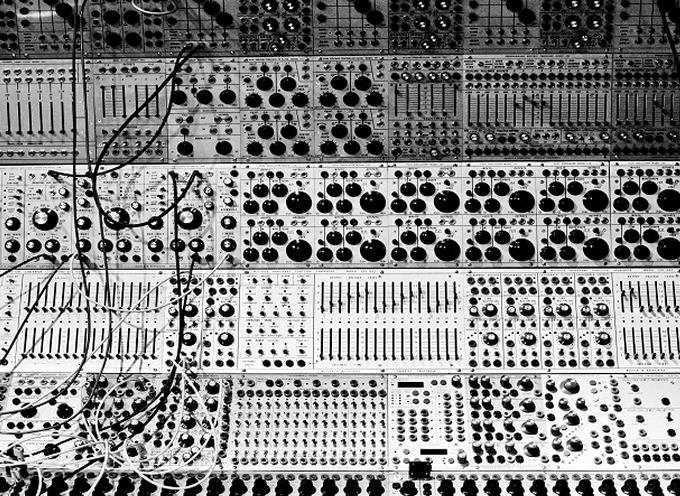 Incubate is an annual festival which takes place in Tilburg, a small city in the South of the Netherlands. Now in its 11th year, Incubate 2015 is known for its innovative and groundbreaking program, each year introducing developments on the cutting edge of music, art and e-culture to its audience. During one whole week the festival occupies over 20 locations throughout the city, utilizing concert venues, theatres, local bars, empty buildings and public spaces.

This year, Incubate organized a DIY Synth Fair as part of their programme. Presented in the form of an exhibition instead of a traditional trade fair, from a Pop up shop location in the center of Tilburg. Miriam van Ommeren, one of the organizers of the DIY Synth Fair states: “We like to show the audience something they are not yet familiar with, but which deserves a spot in the festival”.

With the festivals’ focus on niche cultures in Art & Music, the DIY Synth Fair brings artists, makers, tinkerers and independent producers together to show the fruits of their labor to a larger audience. To understand the phenomena and culture of DIY synth building, we have to briefly look back to the early days in which synthesizers and machines that produced electronic music came into existence. 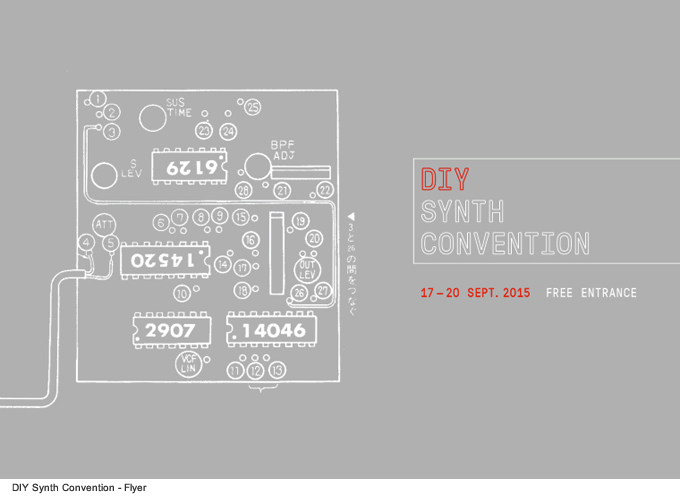 Analog synthesizers use electricity as their sound source. Starting in the early 1940s with the introduction of the Theremin, the majority of devices in an early electronic music studio consisted of repurposed lab equipment and expensive radio test generators, but there were very few explicitly built electronic music instruments. Artists had to make due with very little. What was really needed was a complete solution. Something that could provide all a composer needed, in one purposely-built machine. It was Robert Moog who designed the first machine that generated, filtered and shaped sound, with a degree of control, with the means to revolutionize music. Other analog sound machines soon followed, offering the ability to find new compositional combinations, procedures, and new ways of working, each and every one of them producing a unique, powerful sound.

From roughly the mid 1980s digital instruments gained popularity and gradually started to replace the analog machines. The computer had long been associated with electronic music production, primarily as a controller, but as computers became smaller and cheaper it was only a matter of time before the synthesizer itself would become completely digital. Digital synthesizers formed the birth of the primitive workstation and offered endless opportunities for music production, but lost some of the unique qualities of the analog machinery.

After two decades dominated by digitally produced music, a desire for analog sounds started to grow once again. The modern day modular revolution gained wider attention from a new group of users; a generation raised on laptops and digital instruments who were looking for a new sound and ironically finding it in a form once thought obsolete. After almost half a century, modular machinery has once again found a place in the musical landscape. Musicians are now appreciating modular for its endless possibilities, and the amazing sonic options it brings to the table, but for it to finally receive mainstream recognition, that many feel it deserves, surely the modular synthesizer will need to get out of the studio and take its place on the stage, something which more and more musicians are deliberately asking for.

While relatively low cost euro rack systems have brought modulars to a wider audience, there is still a market for more exclusive systems. The DIY Synth Fair focuses on small independent manufacturers and developers, who create unique instruments that produce an eccentric sound and possess an unusual functionality. Much like the early days of Moog and Buchla, many manufacturers often form a direct relationship with their customers, working with them to create unique, customized systems.

Dan Snazelle (US) of Snazzy FX, who presented his instruments at the Fair, started building instruments six years ago as a means to create his own music. Today he sells most of his instruments online to a wide range of musicians that find their way to his shop to buy his self-made instruments. Small instrument builders are able to survive because they sell instruments made with an uncommon functionality and vision. He says: “My customers are looking for instruments that are tailor built for exploration and experimentation. When customers are buying your instruments, they are buying something that contains your personality, much like an artwork”.

Large instrument companies, that had started to produce analog instruments again after the rise of their popularity, are only able to produce instruments that appeal to everyone and respond to what the market asks. They depend on a larger, more widespread demographic, but in the end all equipment is interchangeable, thus, both equipment from larger commercial companies and independently produced instruments can interact and co-exist. 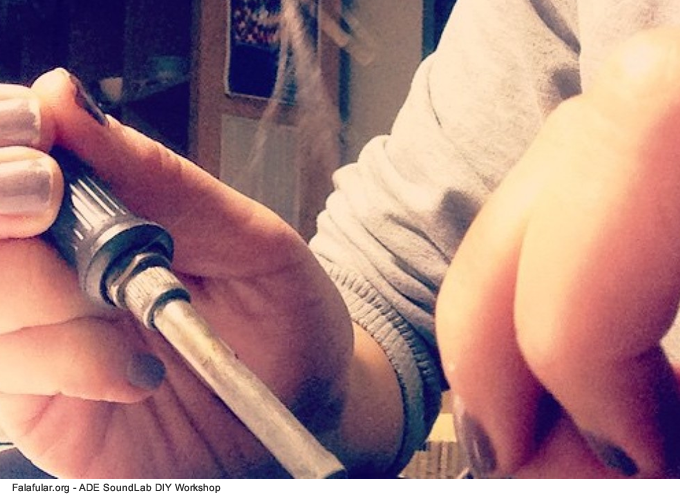 In many ways, the DIY synth movement connects with a larger cultural tendency; a countermovement against disposable culture that shapes an increasing demand for sustainability. For instance: buying a custom-made hardware instrument from an instrument builder can be compared to buying a tailor made suit from a tailor, instead of a generic outfit from a large retail store manufactured in China. You are buying a custom built instrument that will last a lifetime, and you buy it directly from the person who manufactured it.

Various talks with musicians, developers, and synth enthusiasts reveal that there are several forces at play that thrust the scene forward and push the popularity of analog music making. By the end of the 90s, the production of music had largely been transformed into a digital process and as many instruments could be simulated by software, not only the recording process but production process of music making had largely become digitalized. As so much of our interaction is tied to computers, which we use all day, there is a longing for the use of devices that are purposely built for making music.

Much like a guitar, piano or any other instrument, playing them can be regarded as tactile experiences that accesses parts of the brain, that trigger our sense memory, allowing us to interact with the instrument in ways that cannot be replaced by digital interaction. The use of analog instruments for music making is capable of creating a blurred line of who is in control. 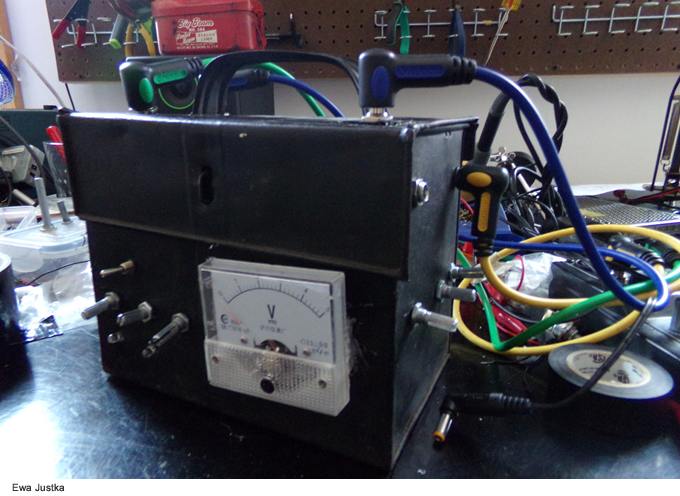 Dan Snazelle: “I sometimes like to create a patch, step back and let it have a life of its own. Instead of playing your instrument, your instrument plays you. It’s a constant interplay of forces. Another explanation for the rise in analog music making is that people new to the scene are learning that it can be empowering to learn how create their own tools and instruments”.

Martin Klang of the London based Rebel Technology: “I started making my own controllers and that’s how I first got into electronics. It’s always been driven by a need to make something for myself, something that I feel is missing, which then develops into its own project. The great thing with modular synthesizers is that you don’t have to create the whole instrument, instead you can focus on the one part that you’re interested in at the time”.

This vision transcends to Rebel Technology’s instruments. Rebel Technology is largely focused on creating open source hard- and soft-ware that allows for musicians and developers alike to customize the use and purpose of their instruments. One of Rebel Technology’s latest projects is the OWL; an open source, programmable effects pedal. Users can program their own effects, or download ready-made patches from Rebel Instruments growing online patch library. They quote: “Our aim is to create instruments that are open and hackable. This keeps the scene alive as knowledge is freely exchanged between developers and musicians alike. The DIY synth scene has a wonderful tradition of sharing and attributing work that is very similar in spirit to open source software, but a lot less structured. 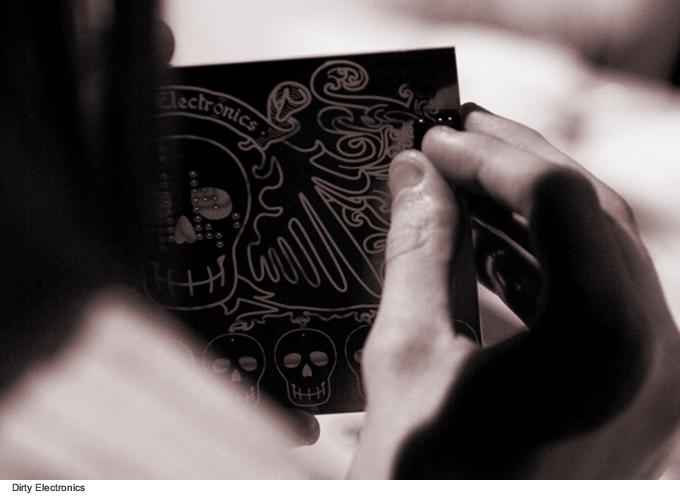 The FLOSS (Free/Libre Open Source Software) community is in comparison very mature, and has developed methods for working collaboratively and sharing skills and knowledge. The DIY electronics scene has a lot to learn from this. We really need to take ownership of hi tech, to build a knowledge commons that comprises all levels of technology. DIY music electronics can play an important part in this”.

Many of the instrument designers meet musicians and other developers at Maker Fairs and Synth conventions in Barcelona, Berlin, New York and London, where knowledge is shared and exchanged between developers, and often new collaborative projects are born, such as the UK based Dirty Electronics Collective who focus on shared experiences, ritual, gesture, touch and social interaction. In Dirty Electronics process and performance are inseparably bound. The ‘performance’ begins on the workbench devising instruments and is extended onto the stage through playing and exploring these instruments. 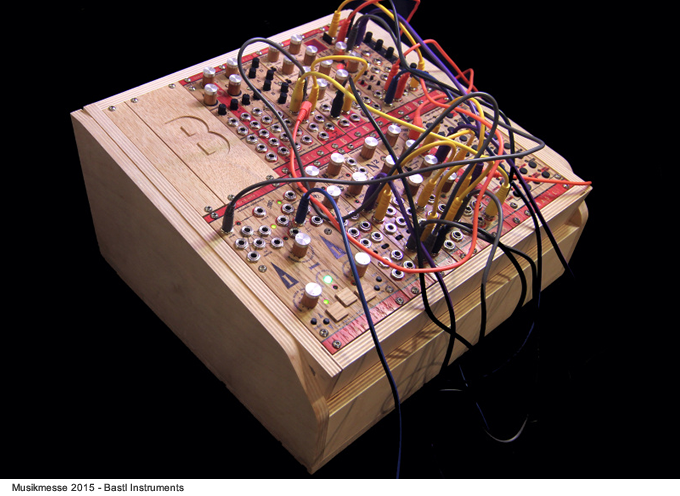 Its exiting to see where the future for analog instruments is heading as a multitude of areas are being explored. Some developers have started to use the analog music devices as a platform for expansion to other media. Such as the Czech Republic based Bastl Instruments– a community driven company focused on producing hand-made electronic music instruments. Bastl Instruments took ultimate use the of the Control Voltage (CV) method that is used to control and synchronise synthersizers, drummachines and similar equipment, by extending their modules to operate with different kinds of motors and sensors allowing the modulars to steer physical objects. Soundpieces can simultaneously control toothbrushes that bang percussion, solenoids that tap out drum patterns and strum a guitar.

Dan Snazelle: For younger generations there is less of a distinction between analog-digital and hardware-software then the generations who grew up with a clear distinction between these systems. Its up to the new generations to reinvent the tools and instruments that have been available to them, and extract the best of both worlds. I suspect the future for analog music making will be more looking into the future instead of reflecting on the past. And im positive we will be seeing new stuff that nobody has seen before