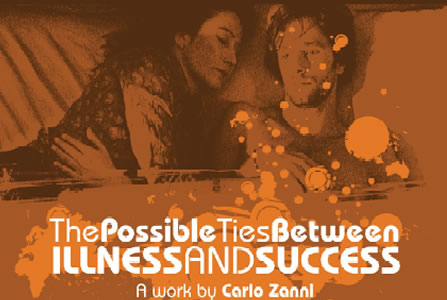 THE POSSIBLE TIES BETWEEN ILLNESS AND SUCCESS: a data cinema project about providing success appropriating other people’s lives

Random and Artificial are proud to present The Possible Ties Between Illness and Success by Carlo Zanni, a two minutes short movie transformed by an Internet data flux and re-edited server-side when web statistics (Google Analytics) are available: the public can watch a new movie every day.

The core idea of the work is the relationship between manic-depressive illness forms and success at large, a theme it symbolically tracks through the filming of a ill man lying in a bed and the presence of his partner (actress Stefania Orsola Garello). The man’s body (actor Ignazio Oliva) progressively fills with stains: quantity and position depend on the number of users (and country of origin) visiting the website. The more users, the more stains, thus causing the “illness” to spread all over the body. The public grants success while appropriating the body of the artist.

The title of this work has been derived from a review of a book called Touched with Fire: Manic-Depressive Illness and the Artistic Temperament by psychiatrist Kay Redfield Jamison. This is basically a work dedicated to all those people living beside someone suffering or experiencing bipolar disorders.

Music for the film is by acclaimed composer Gabriel Yared (The English Patient, Cold Mountain); words of the voice playing over the film are taken from the last page of American Purgatorio, a novel by Brooklyn based American writer John Haskell, who also plays the text in the English version.

“Art as disease. And success as a contagious and self-destructing process.  In a challenging mix between cinema and live Internet data. The Possible Ties Between Illness and Success is a visual statement about the ancient theme of malaise as a typical artistic condition, built with tools and metaphors of our technological era.” (Valentina Tanni)

THE POSSIBLE TIES BETWEEN ILLNESS AND SUCCESS
a work by Carlo Zanni
words by John Haskell
music by Gabriel Yared
with Stefania Orsola Garello and Ignazio Oliva
Opening August 3rd 2006 at La Rada Centro Per l’Arte, Locarno
As part of “Wireless” show curated by Noah Stolz and Fabiola Naldi
IN PARTNERSHIP WITH 59° LOCARNO INTERNATIONAL FILM FESTIVAL