Autonomous Times, the exhibition at Arebyte. An Interview with Nelmarie du Preez 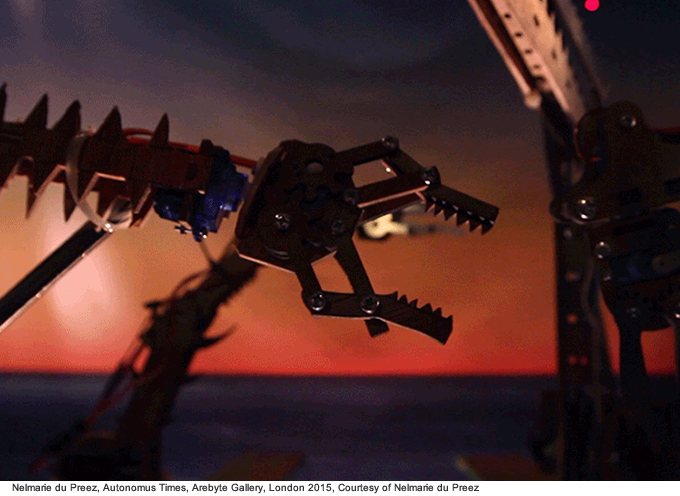 Enter Arebyte Gallery and you are instantly transported to an alternative universe, especially since upcoming South African-born artist Nelmarie du Preez has taken on an unusual approach to sculpture, art, film and “making”. She has blurred the boundaries between art and technology to striking effect in her current exhibition, Autonomous Times, curated by Nimrod Vardi.

A factory line of mechanised robots dominates the space, the machines seemingly reactive to the stimulus that surrounds them; cinematographic sound effects issue from the three flat screen television sets that comfortingly cocoon the nest of automatons, creating an almost eerie sense of foreboding. These gadgets display none of the usual maker’s detritus of chaotic wiring. There are no random hand tools cluttering up work surfaces; everything is neatly laid out and convincingly in sync, the precision reminiscent of a scientific laboratory housing an unidentified species.

One may be forgiven for being reminded of Game of Thrones’ “Khaleesi” tending her baby dragons while watching du Preez projected from two of the three screens. Her short films present a juxtaposition: on the one hand the artist nurtures these creatures by fixing them together lovingly and yet in the next film, she trains them in martial arts disciplinarian fashion. 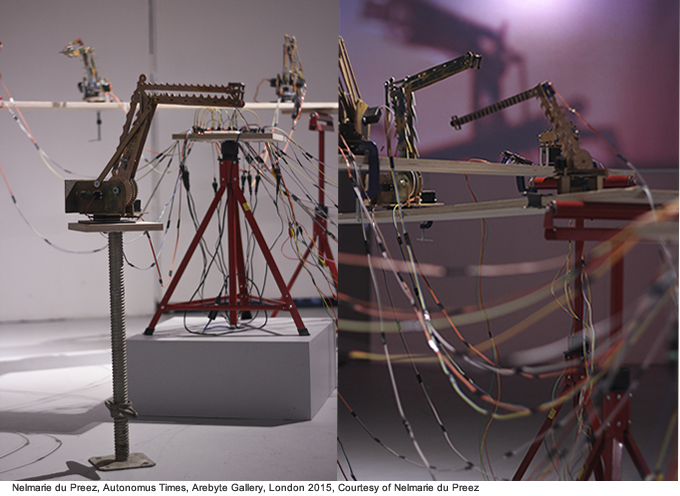 Seeing these moving images, the bond between human and robot is undeniable – There is a sense of mutual respect, or at least there would be if the mini-bots were actually able to feel and think.  The third and final screen depicts these creatures engaging in post-apocalyptic combat, the sinister sounds and flames firing illustrate to us a proposed reality where the machines have taken over.

The artist hides none of her creative process with the observer; her films show her at work with even the odd snippet of her studio wall making an appearance on her training sequence film, transmitting to the viewer the effort, endeavour and reality of developing a project where other artists may be tempted to obscure unique aspects of their work flow, only presenting us with a finished article come the exhibition.

Du Preez admits that her fascination with technology comes from a desire to understand human relationships first and foremost, believing that our quest for ever newer technologies stems from a desire to draw closer to other people. Our interactions with technology suggest that there is something missing in our human experience that computers can provide a solution for, and therefore, considering how we connect with people is more important than understanding how we can develop an approximation of an emotional connection through artificial intelligence.

In seeking to solve her own problems encountered in the technical aspects of her work, du Preez has enlisted the help of the wider maker community, turning to forums to ask questions relating to her Arduino-powered automatons, transforming herself from a mere “observer” into an active participant in the ongoing technological conversations across the globe. 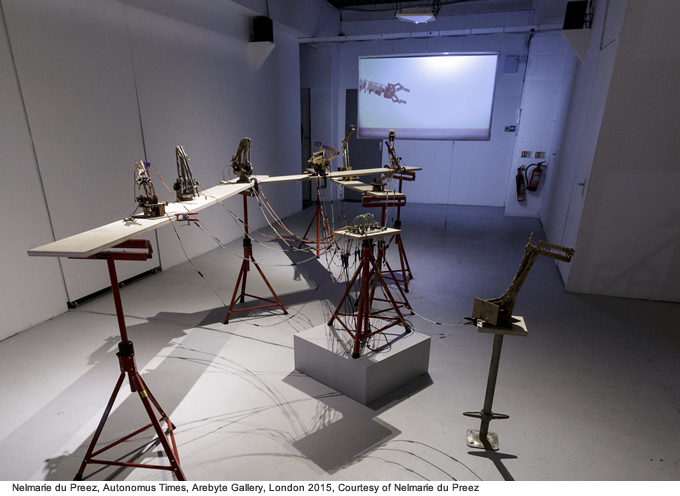 Autonomous Times is a fully immersive, multisensory, 3D experience which engages the observer in a new dialogue where we are forced to redefine our understanding of art and acknowledge how technology, programming and electronics can feed into the artistic process along with more popular visual arts.

Kirsten Hawkins: Do you believe we are close to developing artificial intelligence, in the true sense, machines that can think and feel and respond independently?

Nelmarie du Preez: Recently I read this article that they released this robot in New York that is supposedly self-aware.  I don’t even know what that means but I guess my question is more like “how do we really define intelligence?”  What does that even mean? Does the way that I think about intelligence look the same as you do and how does technology translate that idea of intelligence?

Of course the scientists are working feverishly to produce these things, right? Or that’s what they say. I guess I’m not sure if we, our generation will see it necessarily, like a really, fully artificially intelligent being, but I’m sure it will take some form. It’s maybe not what we think it should be now but I think it’s going to come in some way, that’s what I want to believe. 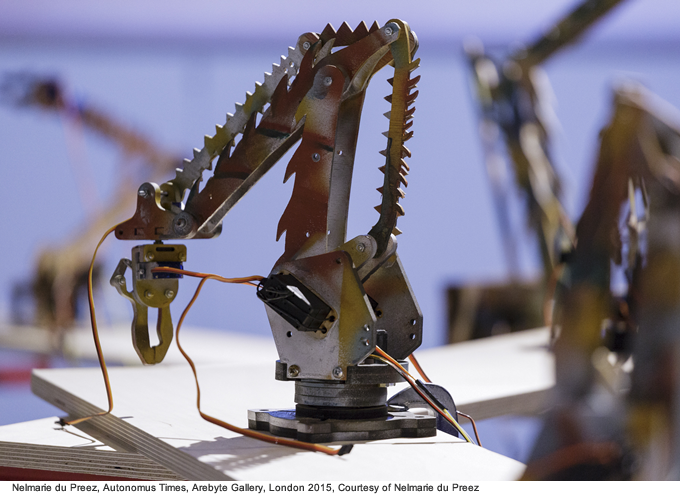 Kirsten Hawkins: What do you think would be the advantage to humanity of having robots that are self-aware, that have emotions?

Nelmarie du Preez:  One could, I guess, ask, do we really need something like that in our lives? Do we need more beings with opinions? This could really actually be a problem if they have too many opinions as well. What does that mean for democracy? Maybe we should first sort out the way that we communicate with each other before we introduce another being.

Kirsten Hawkins: How far do you believe our trusting relationships can go with these robots? Can we befriend them as in the movie “Her”, where the main character has a relationship with an operating system?

Nelmarie du Preez: Well you know, to be honest, as much as my work is about that relationship between humans and technology and how we trust these objects, for me what is more interesting is what that relationship says about human relationships. So for instance, in the movie, “Her”, he has this relationship with this voice that sounds like a human but it’s just a computer.  But what is it that’s making us as humans want to reach for something like that?

What is it that we’re not getting from each other that we need to get from things that we create? My work is about relationship between humans and technology but more so it’s about human relationships and how technology kind of becomes this mediator between us, like we use it and how do we, in a way, find new ways of communicating with each other ‘cause I think that’s why we develop technology; it’s for advancing communication between each other. 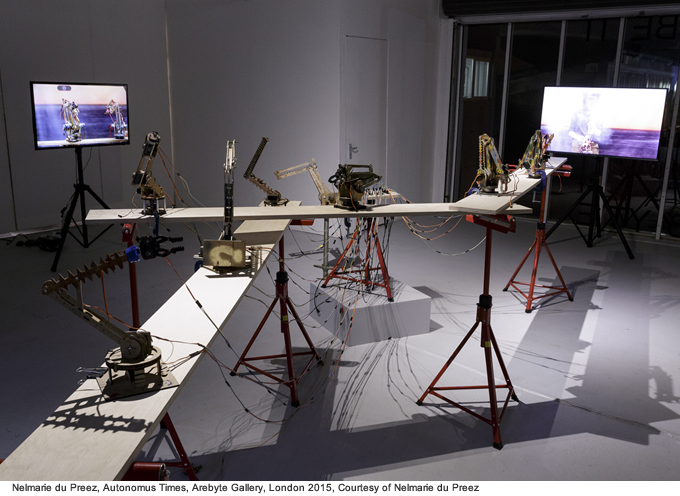 Kirsten Hawkins: What have you found most helpful about working with the open source “maker” community on the internet when you’ve been building your miniature robots?

Nelmarie du Preez: Since I’ve started making art, especially with technology, I’ve always gone online and read. I would search for my question and find the answers and someone else might have asked it before and that was always quite helpful. But in this instance I was working with things it seemed like people hadn’t used it that much anymore so there wasn’t a lot of information just directly online so I suddenly, actually had to become a participant where before I was just like sitting, just observing and getting, and picking the answers without ever asking the question to an actual person.

Whereas this time I was kind of forced to go on the forum and write my question down and wait for someone to answer.  That was really interesting because, you know it’s also kind of nerve-wracking, because I know there’s maybe someone out there saying “This is the stupidest question ever, why are you asking it? Do it yourself, I’m not going to help you.” But then the responses I got where so sincere and helpful, and every time it was exactly the answer I needed. And that could save me so much pain and effort.

And just getting that confidence of actually participating in that community was really something new for me. Now I really wouldn’t think twice about asking a question online, I would just do it and hope the question gets answered. There’s something so beautiful about that open source mentality. Now I would also consider maybe going to these forums more often and also giving answers myself because before I was really just a consumer and now I feel like maybe I also need to start participating and giving back. 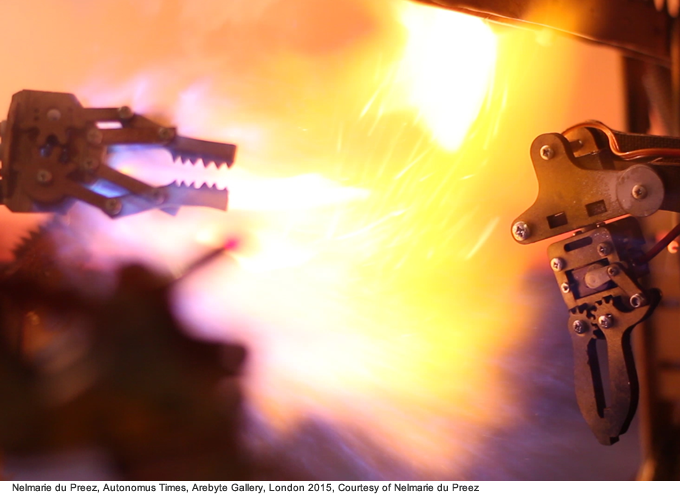 Kirsten Hawkins: It’s interesting that your projects are developed from things that already exist, so therefore, what are your thoughts on ownership and credit for projects that are produced using open source.

Nelmarie du Preez: That’s a very interesting question actually, and one that I’m still battling with… Of course my plan is to give credit to all of these “links” that I’ve found by putting them on my website but I think anyone who participates in that community, I think you’re open, you’re consciously participating in a community that doesn’t think of ownership in that traditional sense.  So I don’t know, I’m still a little bit confused by where I stand on it, but in general, I like to give credit where credit is due. You know, if my work has been produced because of someone else’s designs then I’m going to want to tell people about it.

Kirsten Hawkins: How did you start making things in the first place?

Nelmarie du Preez: I guess I think it goes back about three years when I started my Masters in Computational Arts at Goldsmiths, and there we had different projects that we had to produce. One of the projects was a robotics course and we were taught how to programme robots and I did this performance with a robotic arm. You can see it on my website, I sit at a table and then the arm pokes a knife between my spread fingers.

Kirsten Hawkins: In your own words, what is a maker?

Nelmarie du Preez: Someone that is not afraid to break things, like someone who is willing to open the box, take everything apart and put it back together.  I think that, for me, is the definition of a maker, and that’s why I think, since I was young, I was always taking things apart and putting them back together, and sometimes they work and sometime they don’t. But I always had the courage to do it.

I’ve worked with other artists who want to maybe use technology in their work but they’re often really scared of pressing this button or doing this, and then they’re constantly afraid something’s going to break. And I think that complete freedom of saying, “So what if it breaks but I’m going to investigate it and try to understand it,” I think that’s for me, what makes a maker. 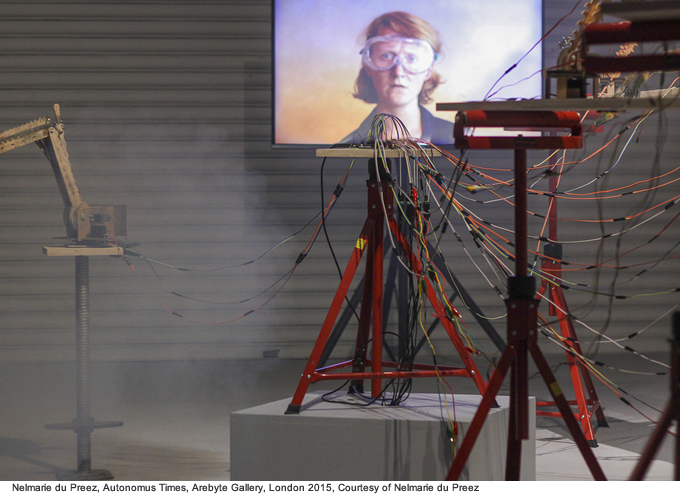 Kirsten Hawkins: How does it feel to be shortlisted for an international award, or six?

Nelmarie du Preez: This year has been really great on many levels. How does it feel? It feels like, “Okay I’m really doing what I should be doing.” I don’t have to go out and question, “Am I in the right place?” Things that  I questioned a few years ago, constantly worrying “Am I really doing the right thing?” But this year, everything has been kind of confirmed, like saying “Yes keep on doing what you’re doing.” That is the best feeling.