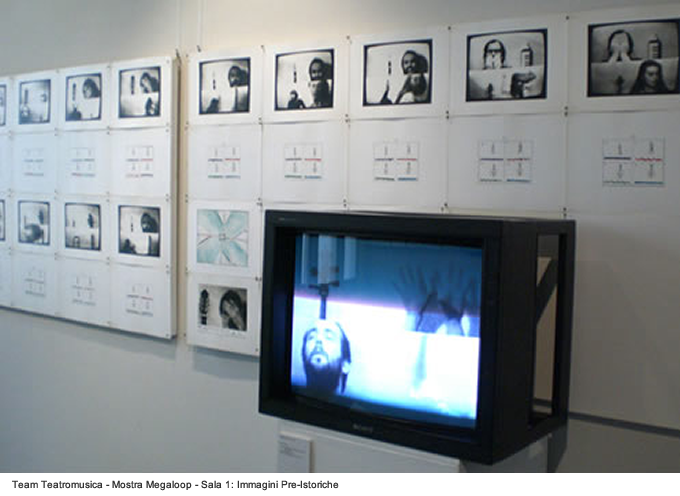 The Tam Teatromusica, the well-known theatrical and video-theatre Italian company, has reached thirty years of artistic activity and celebrates this achievement with a truly memorable retrospective exhibition in Padua. It was 1980 when Michael Sambin, Pierangela Allegro and Laurent Dupont combined their expertise in the field of performing arts, music and experimental video art and gave life to the company, based in Padova.

The Megaloop exhibition supervised by Richard Cardura from the Altinate Cultural Centre in Padova, puts memory on stage in a generous, rich and carefully made construction. Which pays homage to the coherent artistic work of TAM: through the space of the rooms, where the exhibition is set up, strands of time are literally lit up. On show there are some videos of the shows but also projects, props and musical instruments which have been perfectly modified; there are visual cues that are simply original storyboards by the eclectic Michele Sambin (musician and visual artist), cues which are similar to musical scores and valuable sketches of the scene. In them the painting taste, watercolour painting taste in particular, prevails.

We met Sambin and Allegro. They guided us on this synaesthetic journey into the memory of Tam. The first room housed the pre-, that is the activities of Sambin between 1976 and 1979 when he started experiencing conceptual works at the International University of Art in Venice and the Galleria del Cavallino using a AKAI ¼ videotape, as a reminiscence of Cage, Moholy-Nagy, Norman Mac Laren, Oskar Fischinger.

In these years he invented the technique of loop systematically applied to vocal and music video performances (from this, the title of the exhibition): combining the coil of the recording to that of the reading, an infinite loop of video images takes life. These run and deteriorate over time, restoring, in the old Sony Trinitron monitor, a body that splits endlessly, talking to itself, 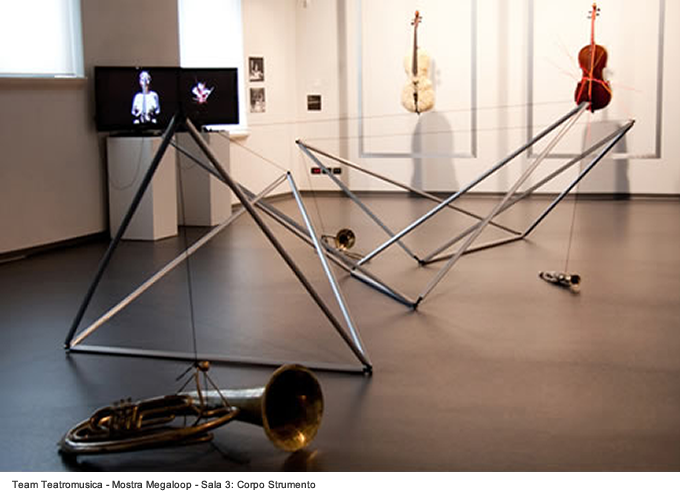 The video really becomes a “Mac Luhan” extension of the body of the performer. Inside the site of Tam but especially the anthology published for the occasion by Titivillu, which minutely collects the studies by several artists through pictures and DVD attachments, it is possible to find proof of these pioneering trials of videotape art, unaminously recognised as the debut of electronic art in Italy (see the catalogue by Bruno di Marino, “Elettroshock. Thirty years of video art in Italy” and the catalogue dedicated to Michele Sambin “Invideo 2003”).

Let’s quote at least Il tempo consuma the most tautological and conceptual work by Sambin that significantly opens (and closes in a loop) the exhibition: it is a work with which Sambin gives Tam his experimental art heritage which investigates time, which manipulates it, reversing it and making it infinite: “While investigating these multiple possibilities of expressive expansion – sais Sambin – I investigate the idea of infinity, a process generated by the performer which the device multiplies continuously. In doing so I also think about the fleeting nature of electronic writing and of its supports”.

Sambin remembered the transition from video performance to theatre as a passage which was, in some ways, compulsory : “My move to the theatre is due – thanks to or unfortunately due – to the Transavanguardia by Achille Bonito Oliva, he said. In those years there was a huge explosion of performativity. I lived those years as a joy for the interlacing of arts and meetings. I met Laurie Anderson and Marina Abramovic, characters that have drawn a line of non-painting, non-sculpture, of something far away from the market. The transavanguardia breaks those utopias typical of the Seventies which were creating difficulties for the art system (videos could not be sold). Bonito Oliva brought art back to discipline: painting and sculpture. And above all he gave it back to the market.”

Armoniche, the work created for the Palazzo dei Diamanti in Ferrara, at the time directed by Lola Bonora, is the first work by Tam: a grid of musical intervals is defined by the shapes of the square, the straight line, the parallels and the star. It defines the basic choreography of the performers which inhale and exhale through a harmonic, in time; some geometric lines are in the meantime projected onto their bodies. It is conceived in order to return, in the best way, the path of the memory of the ephemeral art par excellence which cannot be played again, like theatre. Tam has ingeniously planned a performative summary of the works with the interpretation of some young collaborators of the company accompanied by some live music by Sambin playing sax or bass clarinet for some evenings during the exhibition. So the show (and memory) is really dramatised. 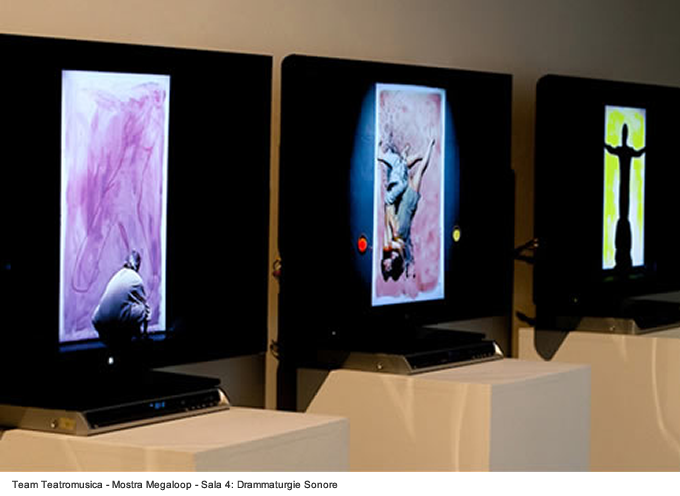 The history of yesterday runs until today without interruption. In a loop. Each room has its own title and theme. Each room hosts a selection of theatrical plays which are broadcast on video and are represented in video installations with visual-soundtracks consisting of coloured storyboards. As Sambin explains: “We need them to imagine the plays and to communicate it but they do not want to give full details.” One of the most fascinating rooms is undoubtedly the one called Il corpo come strumento with which, referring to Mauricio Kagel and his opera Repertoire, Tam begins a new foundation of body language.

The play of references between body and instrument reaches its peak with Perdutamente which is inspired by Violon d’Ingres by Man Ray and Se San Sebastian sapesse inspired by the iconography of the martyrdom of St. Sebastian. In it the cello, as well as the sensual body which replicates it, is pierced by arches. Blasen may be the most symbolic work on this journey. In it, Pierangela Allegro plays the trombone by moving a coulisse and generating a current that goes into a spot located at the tip of the instrument. It approaches and moves away from her face, lighting it or keeping it in shadow. It would be hard not to link these experiences to the contemporary works by Laurie Anderson, in particular to the famous Tape-bow violin, where she put the head of a recorder instead of the strings and a magnetic tape recorded on the brace.

The journey continues in the sign of a “sound dramaturgy”: with the presentation of the sound opera Barbablu and Children’s corner. Tam has started its evolution. In particular this was due to art galleries. The repertoire of musical-theatre and commissions from major institutions like La Scala or Rai, a greater audience and larger venues gave TAM the chance to work with a technology (audio, video, and lights) more suited to their needs. Itallowed them to refine and test new techniques. Moreover they evolved also thanks to young collaborators who began to participate in TAM’s adventure.

Accurate sound spatializations, special light projects, sound and video CG animation effects in the scene (as in Anima Blu which isinspired by Chagall and his paintings) became increasingly dominant in their theatrical and musical aesthetics. It is impossible to remember all the many works at the exhibition and the tracks which are assigned to viewers. Just one example: the video-theatre work Medit’azioni , realised in collaboration with Giacomo Verdi and with the inmates of the Due Palazzi prison. It is an immense work that brings theatre into the social context, in the sphere of total institutions, a territory everyone should think about. 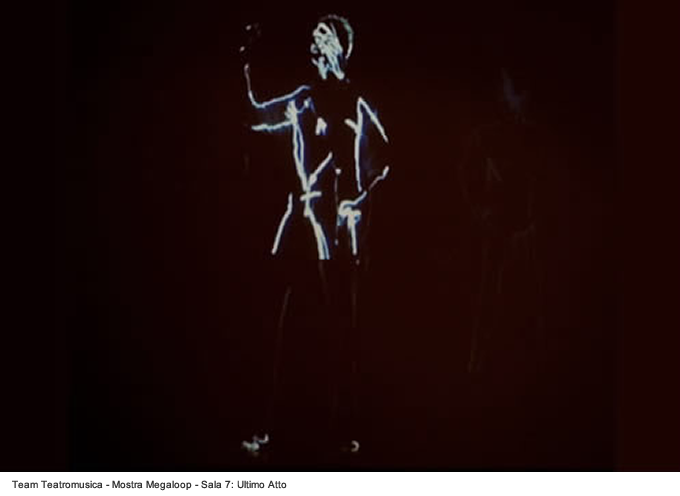 In parallel to research Tam actives in Padua workshops on music-theatre: the willingness to dialogue with new generations and the versatility of digital media brought them to expand their collaborations working with the artist and video-graphic designer Raffaella Rivi and with East Rodeo, a group of musicians coming from the East Balkans. Rodeo has actually become the sound soul of some of the most important projects Tam has been working on in the recent years. Among others Stupor Mundi which was housed in a high-impact site-specific, the Maniace di Siracusa Castle in 2004 for the Festival of Ortigia. In it, the audience, which was travelling between eight stations along the terraces, could see some fragments of videos inspired by the medieval iconography and Federico di Svevia from above the balustrades.

These videos were cut and placed on high flags which were dragged on the shoulders by the musicians-performers. Some other video projections were projected right onto the architectural surfaces and onto the floors. Tam also began to use the graphic tablet as a further contribution to real-time visual effects. In Deforma the bodies of the musicians-performers which were simulating multi-faceted geometric shapes were drawn and literally reinvented live by Sambin. The graphic sign realised – very similar to what William Kentridge did for his Drawing for projection – was projected right onto them; but once the man had slipped away, the painting and the light were still projected onto the backdrop. Deforma leads the path towards its end, the end of the show. It uses images taken from Il Tempo Consuma. And the circle of memory, like a loop, ends. And it starts again.

The exhibition also brings to completion TAM’s new model of artistic archive storage. This merged into a book (“Megaloop” by Fernando Marchiori with numerous contributions by researchers) and three DVD boxes which can be purchased. They gather not only the historical video-heritage of the company but also texts, story-boards, press releases, texts, scores, photographs. The archive is a precious digital instrument for scholars and researchers of contemporary theatre and a good model of a conceptual map for those media centres that are beginning to collect, organize and make available the memory of video art.