The Activist East: Among Guitars And Gentrification 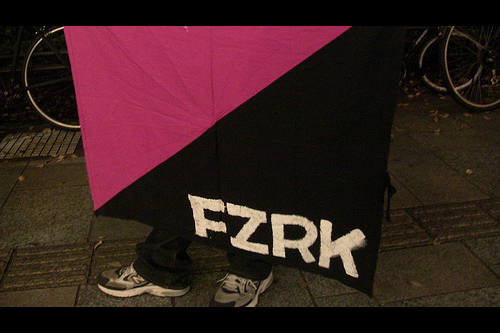 We had been staying in Japan for more than 10 days, as we had been invited to present the project by Serpica Naro in the Cream Festival (http://ifamy.jp/en/ ), even if our main purpose was to meet at last all the artists, militants, agitators and promoters of the Maydays with whom we only have virtual contacts.

Among many other things, one night we ran into the protest of some South Korean workers who came in the little coffee-bar Cafe Lavanderia of the Shinjuku borough where we were having a beer; they came in full of enthusiasm, holding pins and leaflets, and they immediately invaded the room. They grabbed hold the micro of the sound system and invited us to take part in the action day, which would take place on the following Saturday in different points of the city.

We discovered that the mobilization was aided by our friends (http://en.wikipedia.org/wiki/Freeter – http://freeter-union.org/ ) Freeters, the Japanese precarious workers union, who were there with us. As we were complete strangers to the South Korean activism, we tried to catch more information at first hand, between a starred bottle and the next.

Cort, Ibanez, Fender, Parkood… if you are guitarist you would know these names for sure. They are some among more than 600.000 guitar brands made by  Cort  (http://www.cortguitar.com) one of the greatest companies in the world, which is located in Icheabon, South Korea. Most of the production satisfies the overseas demands; in fact, the Cort works in fixed term contracts with various companies that exploit the Asian low cost workforce, so that its owner (http://www.youtube.com/watch?v=R0lGFdfp8Zs) Park Young-Ho can enjoy about 78 million dollars, and be one of the richest businessmen in Korea.

Yet in spite of a positive income, during the last years he changed the company’s marketing strategy, doubling the production and reducing the product quality, mainly to satisfy the great foreign trade demands which occupies the 30% of the profits.

In 2006 his decisions caused a reaction as soon. After so many years of extremely bad work conditions, Cort workers (http://www.youtube.com/watch?v=9LpB1E4EE7k) could institute a trade union within the company and could implement their salaries as they had never done in the last 12 years. Yet, this implementation was to bring them just the Korean minimum wage.

Meanwhile, Young Ho Park’s reorganization went on. In fact, he shifted the production in China and Indonesia and in April 2007 he fired more than 100 Korean workers. He persisted on the realization of his plan, gradually at first but becoming increasingly aggressive as time went by. At last, he had to declare his bankruptcy in 2008 and closed the factory of Incheon, that is Cort’s motherland.

While people are singing love songs somewhere in the world accompanied by one of the guitars produced by Cort, South Korean workers have been protesting for more than 700 days, they have occupied the head office in Seul, they have been arrested and punished, then they have strengthened their communicative potentials asking for the help of artists and musicians around the world and they have taken part to various music fairs all around the world (http://www.frankfurter-info.org/Nachrichten/proteste-der-sudkoreanischen-arbeiterinnen-be, helped by local activists. And thanks through this traversal alliance they are managing to catch the attention of a wider audience which often takes little care of where and how the instruments they use are produced: that is guitars.

Following the Japanese events, a visit in Yokohama in the morning was in the planning (the country’s second most populated town and practically united to Tokyo), to enliven a little the great music fair that takes place every two years in the Japan (http://musicfair.jp/). And during the afternoon they would go to Tokyo where we could go and give our help.

The target to reach in the capital is Kawai, the music instruments store in Omotesando Avenue – Harajuku, the shopping district which has been going through a gentrification during the last two years. We had to meet at 16.00 on the bridge next to the underground station. The huge shopping centre Omotesando Hills dominates the street, it takes up to 250 metres of footpath with a glass and metal structure, 130 stores (many of them are international fashion brands) and 38 flats.

It was built by one of the most powerful tycoon in Japan, Minoru Mori (http://en.wikipedia.org/wiki/Minoru), the famous artist (at least she’s well-known in Italy) Mariko Mori’s grandfather, together with another gentrifying company, Roppongi Hills, one of the biggest housing estate in Japan and also financed by Mori Building (http://www.mori.co.jp/en/).

Omotesando Hills (http://www.omotesandohills.com/english/index.html) was born after the demolition of the flats complex Dōjunkai Aoyama Apartment, Bauhaus styling 1927, with which for the first time reinforced architectures were experienced to resist against earthquakes and that would become an example for the design of housing projects. The refined architects who had designed them had imagined they were being inhabited by the first generation of white-collars experiencing a kind of collective life (we could say it was the first example of co-housing). A part of those flats had been designed with some areas for common use.

In spite of the protests by the citizens and the borough associations, who defended the respect for historical memory and the cultural value of those houses, the bulldozers set to work and in February 2006 the 6 floors of the shopping centre were opened (http://travel.nytimes.com/2006/02/15/travel/15tokyo.html?8dpc) causing a great stir through the newspapers all around the world.

On the opposite side off the street, a few metres far from the luxury shopping centre, was the target point where the Cort workers wanted to take action. It was Saturday, about 5 pm, and the shopping rustling was at the top. A group composed by about fifty militants was standing in front of the Kawai shop-window, where a piano in bright plexiglas suddenly captured our look. No need to wait for long to see every kind of instrument and banners and coloured posters. Drums, accordions, violins, trumpets began to animate to tell the passers-by the reasons for the protest.

Beside them and the Korean Metal Workers Union, there are the Freeters from Tokyo and various cultural activists from New York, and we are there to represent the Euromayday Network; not to mention the virtual support from hundreds of musicians that during their concerts and performances in tour around the world, give their aid boycotting the Cort guitars and talk about the campaign No Cort (http://www.youtube.com/watch?v=7pbKvES) to an unaware audience.

After a number of songs, slogans, music improvisation, the managers of the store looked out and tried to understand what was going on. They were three men in suit of about sixty; with a serious look they scanned that shapeless and noisy mass that disturbed the quiet Muzak of a Saturday evening which should be ordinary. A police van stood a few metres far from the footpath and watched that the situation wouldn’t grow inflamed. But the shopping didn’t stop, so they looked serene.

A delegation of workers went into the shop and began the negotiations. The purpose of this negotiation was to convince the manager to talk to the owner of the Kawai, referring the workers’ requests and putting pressure directly on the Cort head office, which sold the guitars.

They looked seriously at each other, we couldn’t follow the conversation but for sure the workers were telling of how the superior court of South Korea decided on August to consider the mass dismissals made by Cort were illegal: because after ten years of earnings, just a year crisis didn’t justify this kind of behaviour. But in spite of the sentence reinstating workers, the company didn’t agree. After about twenty minutes in an almost empty shop, they seemed to have reached an agreement. The delegation went out starting the dances with leafleting.

The action ended a few minutes after seven pm. The trade unionists swapped their banners and shot group photos to remember the event. A freeter acknowledged that that day was more involving than other ordinary actions, because among the participants there weren’t only union members and workers but also artists, musicians and performers whose music and colours made our determination easier and made us forget our tiredness.

The message certainly started its way to the rich owner of the Cort, while the unstoppable stream of fashion victims on a Saturday evening didn’t stop because of the coloured and noisy protest. Although that seems to be the destiny of whatever happens in Tokyo, la megalopolis that swallows everything and whose activity seems to keep unaffected by anything.