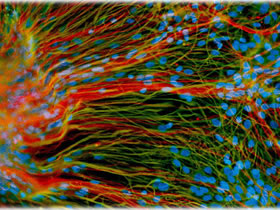 After more than ten years since the official born of the Internet structure, the concept of memory togheter with computer is now common, so that is now acceptable a sort of analogy between human brain and computer, considered as a sort of electronic brain. In this analogy, Internet is a net, its function is to produce a collective intelligence, but also to keep a universal memory.

Stanford Encyclopedia of Philosophy define memory as “a label for a diverse set of cognitive capacities by which humans and perhaps other animals retain information and reconstruct past experiences, usually for present purposes.” There are some common aspects between human and technological memory, expeciialy considering the inner processes, like co difying the information that have to be memorize, their keeping and how to make them present in mind.

If human memory is more than important for our own I, the identity and consciusness, tecological memory is also necessary for the computer, because its aim is to activate everything. For example, the first operation of a computer is starting reading the Bios (basic input output system) from a given point.

For its precision and its ideal capability of recovering the data, tecnological memory is better than human one, but they have not to be considered in comparison, but complementary.

Human memory is much more powerful when the information is memorize without a define path, like a software and the registration of that operation, because the human memory recognise not only the physical expression of a meaning, but also the meaning expressed by emotions, impressions, concepts, mental rappresentations and facts. Many theories said that human memories automatically select, optimise. And it can use with all this operations analogy and association between informations.

All that we said concerne our pc (or Mac), but we know that le challenge of create an articial mind begin with the Second War (from Alan Turino, and then ufficially in 1956 from John McCarty, at the Congress on Artificial Intelligence at the Darmouth College in Hanover, New Hampshire) from the progettual area of Artificial Intelligence, creating a sort of curiosity towards informatic science, that will end into the cognivistic psicology.

One of the most important concept of the Artificial Intelligence is “if I am able to define the computative operations that create intelligence, theorically I am able to recreate a mental activity on every support, mechanical or electronical ones.” (Roberto Marchesini in “Post Human”). In this thesys, taken to the excess, brain is considered just as an algoritm, when, as we said earlier, the memory process uses different input (emotional, sensorial and conceptual ones), automatical selection and a neuronal substratum, that come from the evolutiv process.

he main problem is to give asubstance to mnemonic process of the tecnological mind and put it in a place able to adapt it. This is the challenge of a certain research, connected to the AI, but with a different direction. It is the research on the aritcial neural net (McCulloch and Pitts, Rosenblatt), inspired by the natural ones in our brain, but with different functions. With a bottom-up approach, using the capability of knowing new functions not programmed in the system, they were able to solve complex problems, problems that computer with a huge AI were able to solve, like sounds and images not involved in the original algoritm.

The main problem is structural. What can a computer with this memory become? Will it be still a computer, maybe with a new kind of memory, after that ones created by Von Neumann? There are also doubt about the conseguences, because when we memorize a file we don’t think that it can change, like it happen in the human memory, able to recreate and actualise the memeory.