Digital Life Exhibition”. When Art Does Show Off 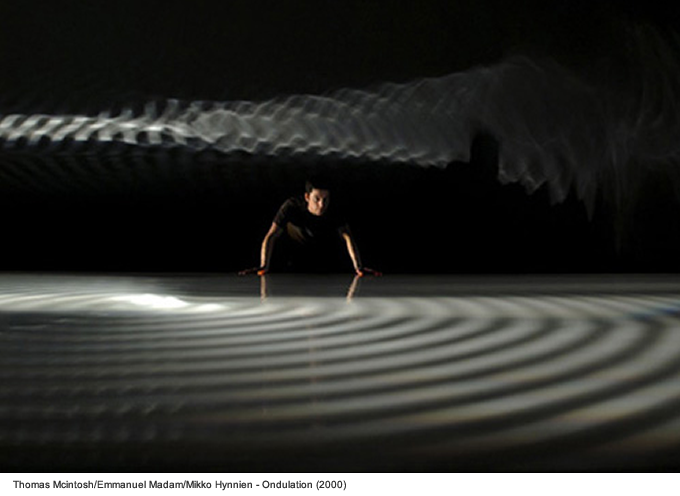 Closure moment is approaching for Digital Life,which opened in early March 2010 Pelanda activities in Rome. Recently restored, Pelanda is the part of the vast ex-slaughterhouse compound (the name itself refers to the room where animals were skinned)which in mid-February opened as “space of cultural production”. Wanted and organized by Zone Attive, a Roman cultural entity that has survived to Rome’s political crossing from ‘veltronian pax’ to Alemanno’s leadership in 2008, Pelanda space was inaugurated as a step further towards the recovery of the Mattatoio di Testaccio.

Presently, Pelanda space is integrated with Testaccio section of MACRO, where Rome’s Contemporary Art Museum, which has always counted on this decentralized site (MACRO Future) as an appeal to young people, will launch the opening of a new building in the end of May.

Funded by Rome’s Chamber of Commerce and keenly endorsed by the Culture Department, Digital Life is the result of the collaboration between MACRO and Roma Europa Festival, the latter having taken charge of the event organization, assigned to Richard Castelli. Digital Life is presented as a “great review dedicated to a digital future and contamination between technology, new media and contemporary artistic expression” (see event press release), its aim being to reveal Rome as the “great capital” (I am with this citing town councillor to Cultural Politics, Umberto Croppi in his speech at the exhibition press conference). 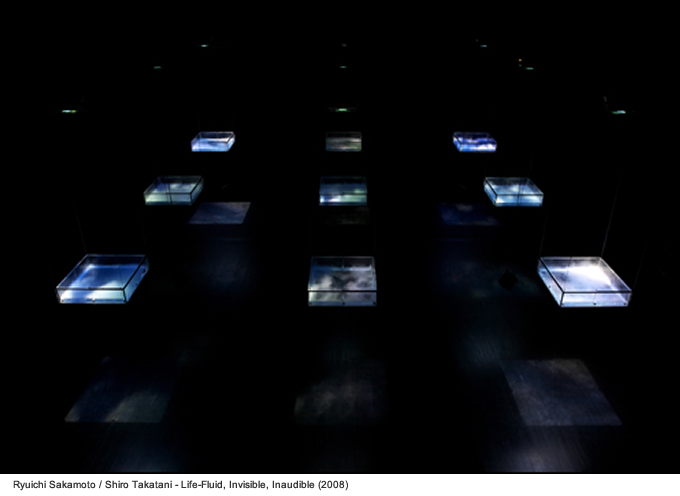 The exhibition forcedly became, in short, integral part of a balances and proclamations system typical of Rome’s political culture. Sumptuously presented, Digital Life had to hold the diamond point role of the capital’s project of cultural innovation which roots into technology as an element of modernity, development and future.

Richard Castelli was the curator of Sensi Sotto Sopra exhibition in Rome for Roma Europa Festival, currently is one of Europe’s new media influent personalities (as Digicult well knows: http://www.digicult.it/digimag/article.asp?id=660) as well as the mind of Epidemic, a French group active since the Nineties and which brought artists like Jefrey Shaw, Ulf Langheinrich, Jean Michel Bruyère, in the main European festivals, and sustains the activity of artists as Julian Maire (no surprise that all of them were invited to Digital Life too).

Digital Life, a beautiful exhibition that fits perfectly into Pelanda space, instead of focusing on the straight ‘digital’, shows that the element that actually arises from the artworks is spacial, is the physical involvement of the observer, the ‘kinematic’ concept applied in all its abstract and sensorial (rather than narrative-objective and linear) potentials in installations.

The first room is to be experienced wearing 3d glasses; its 360 degrees AVIE (Advanced Visualization and Interaction Environment) screen was drawn by Jeffrey Shaw. AVIE has been the visual landscape for Jean Michel Bruyère and Ulf Langheinrich works. The first one, La dispersion du fils, (2008-10) is a long 3D animation: a snake-like series of still frames picked from 500 films based on the classic myth of Actaeon metamorphosis (from Ovid), spins on the screen, creating whirls, fluxes and spirals.

The spectator is captured by space and movement in a quasi-physical process. Ulf Langheinrich’s Alluvium (2010) is all different sort of kinematic experience, yet perfectly matching the artist’s (one of Granular Syntesis duo) other works: a purely visual, psychedelic, black and white experience which lets the mind sail through immaterial spaces. 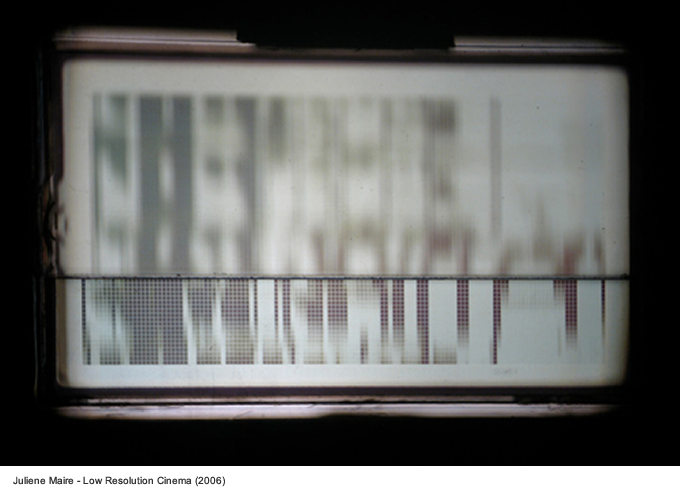 We have met Julien Maire‘s refined, dense, conceptual works before, in the past years, during Transmediale and Sonic Acts. At the time of our visit Memory Cone was stuck by some ‘technical problems’, whereas the famed Exploding Camera (2007) and Low resolution cinema (2009) were active already. The former is a biased film narration based on the killing of Commander Massoud (head opposer against Talibans in Afghanistan) on 2001 September 11th eve through which expose the images saturation caused by pervasive information media.

An ‘exploded’ camera lies on a table. Its mechanisms, a monitor and a computer regulating each single element’s functioning (including audio and a light leaning no the table) are the elements allowing the ‘live’ construction of an abstract film about war. Analog and digital technologies equally entwine in Low Resolution Cinema, a monochrome projection of pixels in extremely low resolution (348×32 pixels) obtained through old analog projectors and low resolution liquid crystals. The outcome is an abstract film in which all the subtle visual variations result from the two LCDs movement within projectors’ beams of light.

We also have met Thomas Mcintosh already (at DEAF in Rotterdam, 2007) and his installation from 2000(realized in collaboration with Emmanuel Madan and Mikko Hynnien), Ondulation, a work based on the utter low tech quality of its components. A tub filled with water, following echoing in a synesthetic movement the sound diffused by the speakers, becomes (depending on color, inclination and shape of the light touching it) a abstract images projector.

Here the synesthesia between image and sound is not software-generated but results from the physical elements in occupying space. The kinematic experience is contemporaneously total and minimal. 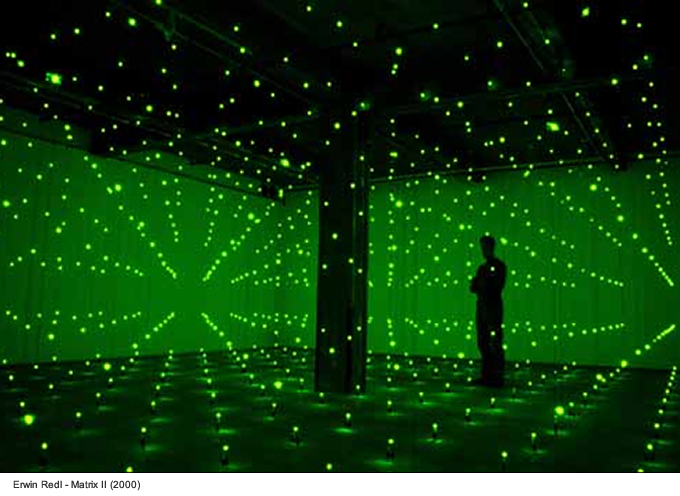 The work that has probably above all others made an impression on large public scale is Life – Fluid, Invisible, Inaudible, by Japanese composer Ryuichi Sakamoto together with Shiro Takani. In a ‘black box’ nine geometrically suspended screens project microcellular and sea-life images. The screens being nothing but transparent containers, filled with smoke and water, on which image sequences gathered in nature are shown.

The effect is disorienting, the viewer becomes part of the projection, being immersed in the images flow, or he can otherwise stare at the moving life up above his head, lying down on the floor of the perfectly dark room, abandoned to protocellular life experience.

Very effective, yet again completely low-tech based is Erwin Redl‘s installation Matrix II, another work dating back to 2000 which achieves to build a totally immersive space operating a conjurer trick. The black box we enter is filled by luminous pixels and walking through this space we feel embodied in this mysterious digital matrix ( the Wachowksi’s brothers trilogy Matrix, that is) of which the future world might be made of.

The walk through the matrix is nevertheless deceiving: the green pixels are not calculation units coming out from a gigantic robotic mind, but actually just led lights on the top of a jungle of thin cables perpendicularly falling from the ceiling to the floor. Matrix is nothing but an illusion, as the myth of digital which is nothing more than aesthetic and can be reproduced and represented through an installation you could carry in a suitcase.

M.O.M.- Multi oriented mirror (2003) by Swedish Christian Partos and Italian Martux’s X-scape 08 complete the exhibition, the political vocation of which, aiming to present the event as the expression of an innovative mission brought about by Rome city council, transfigures Digital Life into some maybe excessively official event (although still targeting youngsters) which and along with this makes a redundant, naive use of words like”digital”, “technologies”, “future”, “real time”, “contemporary”.

In sum, notwithstanding the presence of several compelling works, when I entered the Pelanda space and wandered through its beautiful, freshly refurbished rooms (where the utensils that were used to skin animals are still proudly exposed), I was stroke by the impression that the communicational superstructure put up in order to attract masses of visitors in seek of the “digital future” has exploited the artworks, the authors and their foreign names’ exotic sound, perfect to strengthen the idea of “new”. 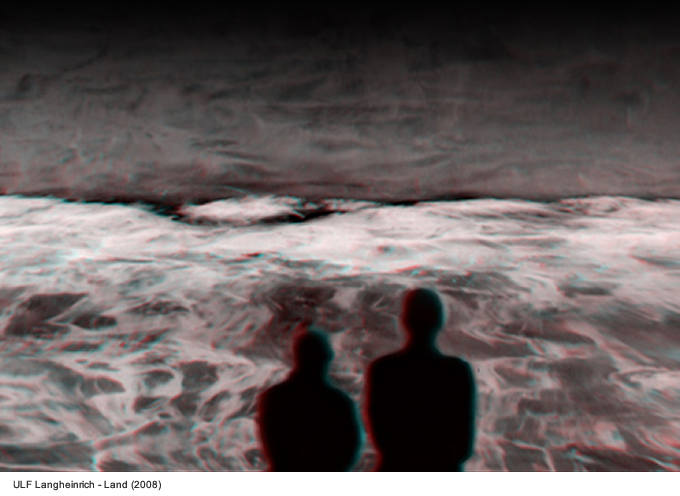 The kind of “foreigner sells better” idea behind George Clooney starring, in the advert of a famous Made in Italy spumante wine and of an Italian coffee brand. In our case it is neither coffee nor spumone that is being sold, but the “new way” of the City of Rome administration instead.

The stratagem to sell here is not Clooney’s sly face but works that have sometimes more than a decade of experience behind and that elsewhere would have by now achieved a higher conceptual position ( the one on the experience between cinema and installations, or on synesthesia would fit in this case), but here in Rome they are just gathered around a weakened (but still easily selling) concep of “digital”.

Anyhow, it is a matter of fact that in Italy the theorization and practice on digital avant-garde has always been a quasi-militant vocation for some people, who through decades have been digging out niches for action, also thank to the rise of international networks to grow and cope in. From Hackmeetings to festivals such as Dissonanze, Netmage or Share (I am citing just a few names), to magazines like “Digicult” itself or “Neural”.

This militant aspect, mostly due to a pyramidal formalization of the country’s cultural institutions, where spaces and funds are accessible only for a restricted elite and “weighty” institutions, led as a consequence that many of the projects being organized were self-menaged or counting on such inconsistent economic resources that thinking of involving works entailing expensive technological sets was not affordable.

In other contexts, Ulf Langheinrich or Juliane Maire installations have been encompassed in more complex dialectics, as for example the one about art and kinematic spaces (I am referring to the exhibition “The Cinematic Experience” http://www.digicult.it/digimag/article.asp?id=1068, organized for the XII Sonic Acts edition in Amsterdam by the Nederland Media Art Institute – Nimk, accompanied by a massive conceptual apparatus of workshops and lectures) and take part to an organic research supported by a collective of people working both on the conceptual and practical aspects of Nineties new media avant-garde. 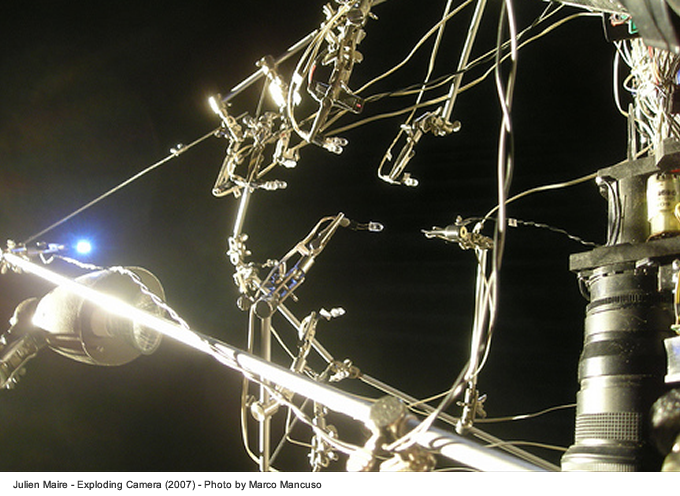 Here in Rome, instead, to see these works one must access such a super-formal, pyramidal, built from the top, non-permeable, the “novelty” concept of which struggles against the idea of avant-garde arising amongst sharing and research environments, and gives space only to powerful institutions’ pure overstating.