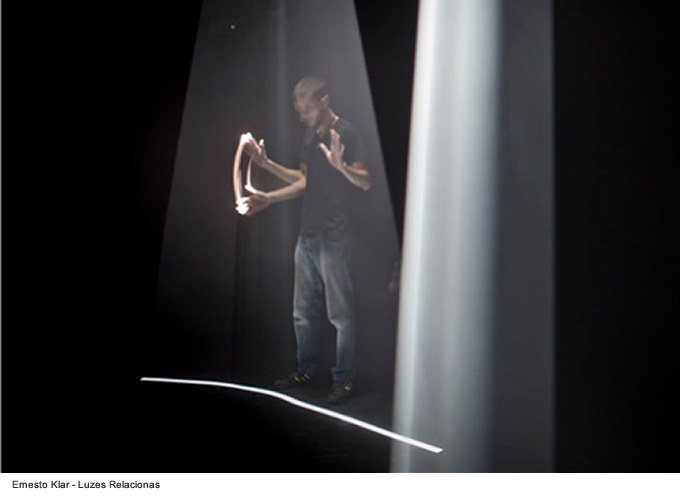 From 2 to 7 November last year, the sixth edition of Share Festival toke place in Turin. The event proved, throughout the past years, to be a prolific source of inspiration and reflection on cutting edge media art and digital cultures’ issues.

Although until not many years ago, such subjects were seen as a small niche of artistic and cultural contemporary scenery, now they cannot be taken that way anymore. The self-consciousness of how media and technology permeate our daily life completely, is testified in the headline that artistic director Simona Lodi chose for the event: “Art and culture in the digital age”.

Discussion are not anymore on specific categories of art, but on what does creating art and culture in the digital era means. It is the specific approach of this festival that has always distinguished it, being based on the analysis and critique, this year specifically through exhibitions, talks and performances on the topic “Smart Mistakes”.

The unpredictability caused by am unorthodox use of media and the deviation of those means from the dominant paradigm, was split in three branches to delve into: media and technology’s mistakes, biological mistakes and unexpected surprises. This also was the main theme of the contest’s six finalists’ exhibition, set on the second floor of the Museo Regionale di Scienze Naturali (County Museum of Natural Sciences). Clearly, the articulation of such a complex subject couldn’t be any less than wide. For this reason, the selected works investigate very different types of approaches to technology, based on each single artist very personal research process. 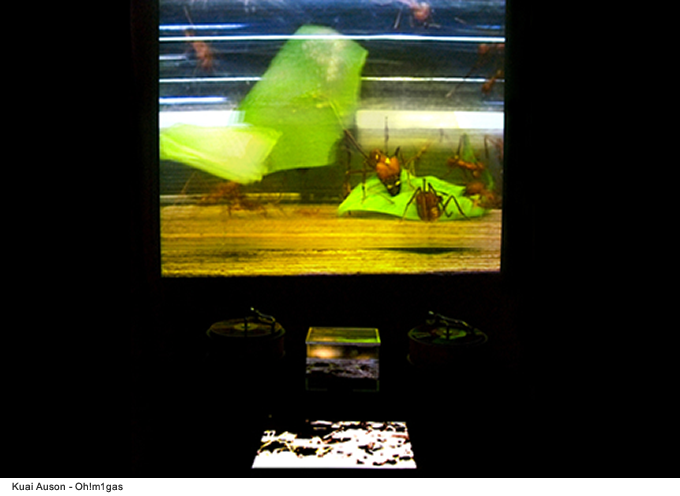 Jurij Krapan, Andy Cameron, Fulvio Granaria and Bruce Sterling were the panelists that prized as winner the work Luzes Relacionals by Ernesto Klar, an artist that since years shapes his path of research on light, space and sound. The interactive installation makes use of sound, mist and a software that allow actively intervene on the light-space modification. The initial feeling of confusion in the interaction process, gives way to the curiosity of investigating the different possibilities that the morphing of geometrical light rays gives. Flawless, that is the appropriate definition for a work so formally precise and underlining a great care being put in the design too.

Equally interesting is Kuai Auson’s Oh!M1GAS which got the mention of honor. The work is a process of biomimetic shrilling-modulation, based on an audiovisual output produced by a strictly visually and sound-surveilled anthill. The movement and the sounds generated by the ants activate two record decks, creating a sound similar to “scratching”. The author analyzed the anthill as an autopoetic machine, capable of solving problems “from below” through chains of sound interactions and relations between the insects. putting that in relation with technology creates a similarity joining the sound produced by the recorders and the ones originating from the insects that operate as means of social organization in the anthill.

A different way of analyzing the sound was the one brought on through Dc12v, by the group Teatrino Elettrico. All the sounds in the performance were generated only by analog instruments; recordings of movements and electromagnetic fields created by everyday used machineries. The table was the scene on which electricity would be the engine, and every gesture or tiniest sound would be, amplified, multiplied and commented by live-taken footage of the eery actions. Authors define the work as “a writing desk tragedy in one act, for self-propelled machines”. 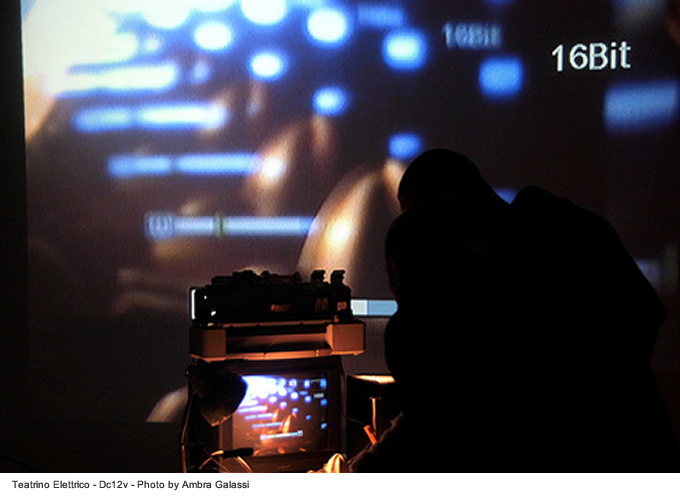 So, ranging from autopoetic biologies to synthetic experimentations, one could then look into the web’s inborn creative potential through the work The man with a Movie Camera, by Perry Bard; a vide project based on open contribution from people all over the world that could reinterpret Vertov’s script. The work investigates the possibility the we gives to create a film that would be a documentation about differences in daily activities. Users can upload footage on the artist’s website, shot with webcams, cellphones or videocameras. A specifically designed software, edits and plays in sequences all the different bits, thus originating unexpected contrasts resulting from the co-presence of culturally different factors, spread all over the globe.

Processes of cognition and of political/social representation of the self in the digital era, were explored in another one of the six selected works, the performance Macghille just a void by the Knowbotic research group. The authors enact the performance by wearing a mimetic disguise called Ghille Suit, which was first created for hunting and then used in wars since World War 2. The action toke place in a urban environment, which underlined how the – we can call it technologic – camouflage puts the individual in a state swinging between utter anonymity and exuberant presence given by the mask.

The sixth selected work is As an artist, I need to rest by Sonia Cillari. This artist’s research path is remarkable and in my opinion, the work presented at Share thoroughly expresses all the elements of research. A performance, that is, that involves the artist’s body in relation with technology and digital production; the artist lies on the ground and breaths through a small pipe linked to a wide screen. Variations in her breathing originate digital elements similar to feathers , six digital models going from accumulation to resistance. What’s more, the whole system records the levels of carbon dioxide in the artist’s breath, changing the color of the elements on screen. The more the video continues the more we can perceive the struggle in the performer’s breath and the tension of holding control on the digital creation and controlling the body itself, in a perpetual feedback between the machine and incarnated singularity.

Together, all these works show the diverseness of effects that can derive from the use of technologies in everyday life, but also reveals the creative shiv entailed in the unpredictable factor given by an approach that is personal and not dictated by the mainstream digital protocol. The rest of the exhibition consisted in a selection of artworks within a similar curatorial frame. Namely, many works by artists who use mistakes and unpredictability as sources of activism and research. 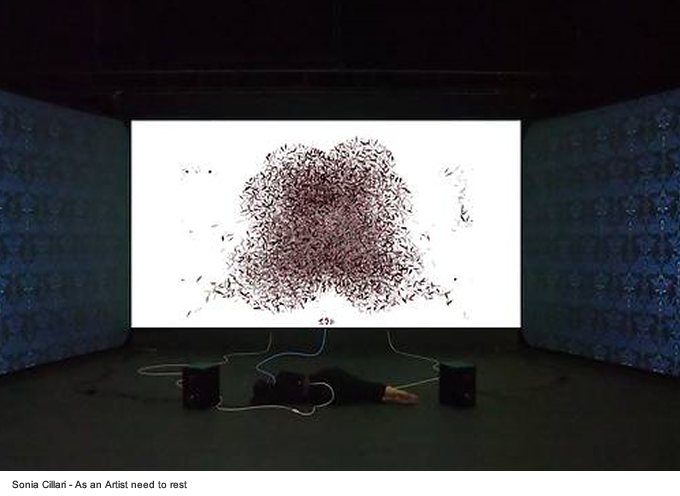 Among the others, it is worth to cite names as Mark Tribe, Jodi, Eva and Franco Mattes, Alterazioni Video, Ant Scott, Cory Arcangel and Les Liens Invisibles. These last group was the protagonist of a recreational-performative event: R.I.O.T. / Reality Is Out There that led the participants through an experience of paradoxical tourism. Previously, the group had already shown with the work Google is not the map, how Google Maps is nothing but a representation of the tangible world which has nothing to do with it. Similarly, in R.I.O.T. they attack augmented reality, more precisely the myth that augmented reality entails. Using a gps and an application similar to the ones installed in smart phones contextual guides, the artists created a number of virtual sculptures in key spots of the city, invisible to the eye, but seeable through the cellphone.

The group aims to an opposite process from the one used in the past, so they subvert the map by virtually manipulating reality. The title of the action expresses its sense, namely to enlighten the different processes of alienation pervading our everyday life, carrying the spectators through infinite and bizarre ways.

One of this year festival’s news was the Symposium themed on “Smart Mistakes“, where researchers and artists scrutinized the value of error in very different fields. Relations between art, activism and business, namely those smart errors which constitute a breach in the social and economical pattern, were investigated thoroughly the round table Intelligent Mistakes or the usual business, lectured by Christian Ulrik, Tatiana Bazzichelli, Geoff Cox and the Les Liens Invisibles. Also, the in-depth examination on genetic errors by Edoardo Boncinelli was extremely interesting. It was an indeed rich agenda and it would be too long to sum up everything here. It will suffice to cite some of the names that were involved as Antonio Caronia, Siegfried Zielinsky, Bruce Stearling and Stelarc. 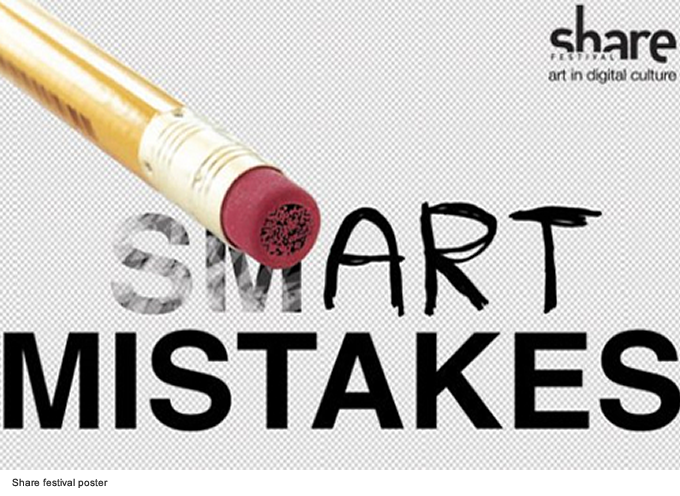 Moreover, there has been plenty of music and video performances that had for protagonists Eniac, Marko Batista and Giacomo Verde. The range of subjects and reflection matter conveyed by the festival was so wide that it is astonishing how quickly the organizers and the creative director, Chiara Garibaldi, Luca Barbeni and Luciana Corbo have been able to set it up.

However, we were also pleasantly stricken by the high quality achieved despite the clear lack of funds that is now affecting the whole cultural environment in this period, due to a – shall we say – blind political system.