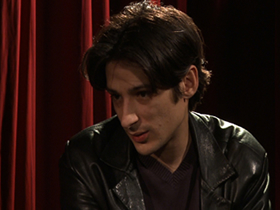 “To become is never to imitate, not to “do like”, nor to conform to a model, whether it’s of justice or of truth. There is no terminus from which you set out, none which you arrive at or which you ought to arrive at. Nor are there two terms which are exchanged. The question “What are you becoming?” is particularly stupid. For as someone becomes, what he is becoming changes as much as he does himself. Becomings are not phenomena of imitation or assimilation, but of a double capture, of non-parallel evolution, of nuptials between two reigns. Nuptials are always against nature. Nuptials are the opposite of a couple. There are no longer binary machines: question-answer, masculine-feminine, man-animal, etc. This could be what a conversation is  simply the outline of a becoming…” – Gilles Deleuze

Conversazioni (2008) is the first movement of the biennial project Generazione Tondelli 2008/2009 . It is curated by Silvia Bottiroli, in collaboration with Zapruder Filmmakersgroup.

The work consists in five video-dialogues with the five winners of Premio Tondelli from 1999 to 2007: Mimmo Borrelli, Davide Enia, Stefano Massini, Fausto Paravidino and Letizia Russo. Its original version was presented for the first time during the Festival Riccione TTV, together with a sound installation
(Check out alle 16) in five rooms at Sixty Hotel in Riccione.

These two versions show the double nature of the work: the oral narration, like the dialogue, and the analysis of time and space through theatre and videos. Conversazioni is a visual project, an intimate show. Silvia Bottiroli, the creator of the project, is a contemporary theatre critic and expert and she works through critical essays and projects and productions.

She said: “In the future, Conversazioni will be just a video performance. It was presented in this double version just for Riccione TTV, for the first presentation during the festival. We wanted a special occasion. Our reference point is Pier Vittorio Tondelli, who knows well the Riviera”.

Some texts of the video come from Tondelli‘s text, Camere separate; they help to think about dialogue. Writing is a starting point in life.

Conversazioni is made up of five different chapters, 20 minutes each, where two actors, the critic and the playwright, discuss following the path of alphabet vowels. Each vowel is necessary in order to suggest a significant word, a memory, or a keyword. The brochure text says: “The alphabet vowels are the starting point to find five essential words: it’s not theatre because theatre is only a part of a dialogue about the world”.

The video was produced in collaboration with Zapruder Filmmakersgroup  a group made up of Monaldo Moretti, Nadia Ranocchi, David Zamagni, directors of the video. “The real nature of Conversazioni is the video-dialogue, and it will be so in the future”, Silvia Bottiroli said. “The Zapruder members are video-artists who also work in theatre. They worked with Motus, Fanny & Alexander, Societas Raffaello Sanzio… They have a special relationship with theatre and video-art. I worked with them on the shooting, the set and the montage”.

About the video production, she said: “They did a great job by using two fixed 45 degree cameras. We made the shooting as easiest as possible, the montage was almost unnecessary. And we never said it, but the video was filmed on an empty theatre stage, with a closed curtain on the back. For this reason, our work is also a reflection about time and space in theatre”.

In these conversations with artists there is an implicit reflection about time and space on the stage, but also about visual and sound space. In this case the video is used as an invisible and silent means to show the physicality of dialogue, out of real and finite time and space.

In these conversations with artists, they want to find a new kind of critic. Silvia Bottiroli said: “Before starting the work my question was: what would the audience like to listen from two young playwrights? We focused on what happens in a non-conventional dialogue, trying to avoid to comment. So, we wanted to find a new way of talking about ourselves. Conversations are also improv isations, they can create something unexpected” .