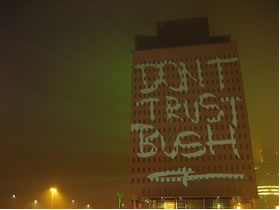 From graffiti to installations, street art calls for freedom in expression in public spaces. It operates with developing techniques strictly related to new technologies. And they are not always welcomed by the state authorities.

So an evening, raising your eyes, you could be not in front of a spray decorated wall but in front of a whole front building, invaded by light wrights “shot” by a projectorOr a monument not covered by paint but by coloured magnetized LEDs. These are some of urban “non-aligned” communication acts realized by Graffiti Research Lab (G.R.L.) , a think tank focussing its efforts in the integration of open source technologies and metropolitan activism of writers and artists.

This is a constant criticism to society’s falsities and double soul of a system on one hand condemning graffitis and any communicative expressions in public spaces, on the other promoting and economically sustained by a constant bombing of ads messages. The criticism is the basis for G.R.L. ‘s projects substituting or enriching the so called “classical” graffitis with light devices such as LEDs or projectors. The research in tactics and solutions widening the graffitis world is realised thanks to a wide network comprising single creative works to spaces, Eyebeam , a centre for digital experiments and new technologies.

In collaboration with G.R.L. Eyebeam created Open City , a manifest on the art state of the urban re-appropriation realized by a myriad of artists, writers and militants. Beginning with LED throwies and arriving to G.R.L.’s laser tags, from remote-controlled robots with sprays to flesh mobs of people in underwear in the subway, the show explores instruments often invented and produced by themselves- and strategies of the new street artist generation. It will stay open till the next 14 April in the Eyebeam’s stands.

This is a kind of activism often hindered by state power and considered as a violent action. At the end of January in Boston a marketing guerrilla action realized with LEDs-covered panels and present in many parts of the city was paradoxically taken for a terrorist action using explosives devices. The episode ended in the arrest of the two involved artists.

And it recently happened to AVONE , a writer close to G.R.L., to be caught in jail for vandalism. The group, together with others, is not only working for its release but on the whole for optaining the right of free expression in public places.