Stalder: The Future Of Digital Communities 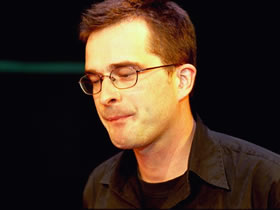 It was almost 10 years ago, when in 1994 Pierre Levy wrote “the collective intelligence”. Maybe it was a too positive vision of what was going to be the digital, but that book developed a lot of scenary, from the idea of a virtual community to a ciberspace made of related minds.

These were the days of the first theories on online communities, that years later saw lot of people using computers and modem to connect to BBS, the first idea of horizontal network. Many things changes, from BBS to mailing lists and then the first weblog. Nettime, Rhizome, Syndicate, Faces, Spectre follow the history of net culture, and also nowadays they are very important for people who want to stay tune on the development of the international media art. But research is still going on.

New standards for social networking are now popular, as they seems to be the new mania for a lot of web surfers. From the most commercial like Friendster and Myspace, that create a community of friends of friends, compiling a form and entering into the game with a home and a contact list, to laboratories like FOAF, Friend of a friend project, which main idea is searching new standards to the online customisation of each communities.

Foaf a matic is an easy javascript that allow the user to create a description of himself and his community in Foaf, using XML and RDF. Infos like name, e-mail, anche name and e-mail of friends, allow spider, that analyze online descriptions, to connect communities, bringing interesting development to creations of digital communities.

To analyze the present of digital communities and new development of social networking, we met Felix Stalder, moderator of Nettime, international mailing list about net culture. Felix Stalder lives between Zurig, where he is a member of the Department of new media in he Academy of Art and Design, Wien, where he is an independent researcher and Toronto , where in the 2000 create together with Jesse Hirsch the project Open Flows Networks Ltd. (http://openflows.org), focused on open source as a social principle. A topic which is another interesting object of research into the world of digital communities.

Tatiana Bazzichelli: You have been co-moderating the Nettime mailing list for the last couple of years. Do you think that since the 1990s things have changed in digital communities? What are the conditions of collaborative networking today?

It has been replaced by a much more mixed understanding of community, where informational and physical contacts co-exist and require each other. I think there are a lot of smaller projects and personal friendships that have grown out of nettime as a community, but they are a bit more selective, or private in nature.

As a whole, I don’t think nettime is much of a community. It’s more a commons, a resource that is jointly maintained. This is perhaps a more limited concept in terms of the density of the social interaction, but I doubt that you can create a community by email only. In the early years of nettime, the community character was related to its relatively ‘clubby’ social basis, where people knew each other from festivals, and other meeting places. The list was very homogeneous. While there was a lot of talk about diversity, its practice was much more exclusive than it is now.

Now, with 3500 people on the list, this is no longer the case, and the idea of holding another nettime meeting, has not been proposed in a long time. After all, how much do you have in common with a group of people who spends like you an hour or two reading, and occasionally writing for nettime?

This is not a pessimistic characterization, but in 10 years, we all learned what email can do and what it cannot. The general conditions of collaboration, on the other hand, have improved, it seems to be. There has been a tremendous collective, or perhaps better, connective learning curve, on how to use new technologies for collaborative purposes, what some of the norms are that are conducive to collaboration (such as Open Content Licenses). But from my particular point of view, it seems like the aim of these collaborations are bit more focused on practical issues, and the community part is a bit more residual, or, it is generally understood that you need much more for community that collaboration.

Tatiana Bazzichelli: It seems that, in the last few years, people on the mailing lists are more interested in posting ready-made works or announcing their initiatives rather than engaging in deep discussions. Do you think the interest has declined, and less people assume social responsibility?

Felix Stalder: In the case of nettime, we decided to spin-off the announcements into their own list,, in order to prevent them to dominate the discursive space. It seems to have worked quite well. Nettime functions still as a place where people write significant original content. But, besides, I think it’s nothing bad when people post work that has been produced elsewhere, because what they do is they enter it into the commons, that is maintained in the heads and on the hard disks of the subscribers, and in a couple of online archives. It becomes only problematic when the list starts to feel like a dumping ground, but that’s a question of moderation and preventing people to post their half-baked term papers. But, for nettime, this has not been a problem.

More generally, I don’t think interest or social responsibility has declined. In the mid 1990s, there where very few forums where people could talk intelligently about ‘networked cultures’. Now, every university has its own new media department. There was a very brief moment of ‘convergence’ where a lot of people had no place in the existing intellectual institutions and they began to build their own contexts. Now, we witness a kind of re-specialization, where some people have been swallowed up by institutions, others are active in more specialised, practical contexts (say, indymedia).

Nettime is one of the few places that has survived as a pure discursive space that is neither production-oriented, or institutionally anchored. That is, as far as I can see, very unusual.

Tatiana Bazzichelli: What role do communities and weblogs play in the emergence of the “digital commons”? More specifically, which role do digital communities play in encouraging the use of free technologies and software, i.e. Linux OS and other programs developed in its spirit?

Felix Stalder: I think that commons-based information feels necessarily social, in the sense that its clearly developed by peers (rather than an anonymous corporation) and that in most cases, one is dependent on some of these people to fully use it. It feels very different, not always better, though, to read discussion lists when you are trying to get your machine working, than to read a manual.

Even if you do not interact yourself, you are still relying on the interaction of other people in very transparent ways. This makes it clear that the development of this resource, be it software, or text like wikipedia, is a communal effort. For this effort to work, it needs a certain social and technical infrastructure, just like commercial production needs the firm as its organizational base.

In other words, ‘communities’ are the social basis of open source production, in software and beyond. Though I presume that it varies from participant to participant how ‘communal’ this feels. For example, there are Linux-user groups that meet in person locally. Some people like it, because being a Linux-user is a important part of their identity, others hate it, because they realise that having common technical interests is not enough for them to associate in a more general way. I think the fact that people, individually, can determine very precisely, how much community they want from a commons-centered group, is a important aspect why so many people can, indeed, collaborate. For some, it’s just a one hour/week thing they do, for others, it’s the center of their life.

Tatiana Bazzichelli: Do you think social networks can make it easier to manage – and enjoy – digital communities? Do they manifest some new potential or do you think they are just a new way of invading people’s privacy?

Felix Stalder: Personally, I don’t like services such as Friendster because they have a tendency to consider relationships only as ‘social capital’, which I find very limiting. With an eye to marketing, it’s quite obvious why commercial providers (Google, Yahoo!, etc) have a strong interest in these applications. It’s a dream come true, market segments that identify themselves. When you can combine that data with the data from a blogging community, it’s even better. These services also tend to create gated communities, since the protocols and databases are not open, so you cannot link from one service to another. This already indicates that they are not really interested in supporting social networks, but in hoarding personal data. This does not apply to FOAF, which really is only a meta-data specification. It’s not an application but tries to establish a new standard for annotation and syndication.

That said, I think the ability to visualize relationships in virtual communities can be very interesting, in as much as it helps the community to become more aware of its own structure, dynamics and blind spots. So, the critical question is less if we have privacy or not, but what are conditions under which we become known to others. Who defines the categories that I can choose from to represent myself? Who defines the rules according to which we can engage with one another? For example, in 2003, Friendster kicked out a number of people who were not interested in ‘serious networking’ but rather engaged in role-playing [http://archive.salon.com/tech/feature/2003/08/14/fakesters/ ].

Generally, I think tools that can help to create context around online social interaction are interesting and positive, but to implement them in a way that can deal with the richness of such context is very difficult. The same, though, could be said of dating sites, and they are hugely popular.

Tatiana Bazzichelli: Speaking about Telestreet Italian Communities, you wrote last year about some activists in Zurich who adapt and extend the Telestreet model through a local TV and a digital video archive. Could you tell us something about this phenomenon in Switzerland?

Felix Stalder: I wouldn’t call it a phenomenon in Switzerland, but in Zurich there is a group of people who is deeply influenced by the Italian Telestreet experiments as a way to connect their political, social and artistic interests. They have done some very interesting work, such as connecting micro-broadcasting [http://snm-hgkz.ch/SNMHome/diplom00/diplomSL.htm] to p2p file sharing [http://copyfight.ath.cx/]. But in the absence of larger social movements, their work is mainly prototyping and artistic experiments, an area in which I think they do very interesting stuff.