Valerio Adami And The Pictorial Sound 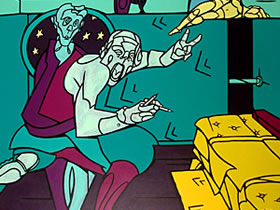 Valerio Adami (17 March 1935) was born in Bologna, but he was in Milan during the war. He initially drew ruins: houses devastated by bombs. Felice Carena’s studio, then the meeting with Oskar Kokoschka in Venice and later the Brera Academy with Achille Funi marked his education route.

He started from an expressionistic painting that was influenced by Francis Bacon’s works and later dealt with the resolved figuration, following the models of American Pop Art and particularly of Roy Lichtenstein; he thus developed a sort of fantastic and ironic comics story, where ordinary objects are put in depersonalised interiors, becoming symbols, sexual as well, of modernity. In 1958 he began to travel and he lived and worked in many cities in Europe, in the United States, in Latin America and in India  and he struck up new friendships: writer Carlos Fuentes, philosopher Jacques Derrida, painters Saul Steinberg, Richard Lindner and Matta, Octavio Paz, Italo Calvino and Luciano Berio are only a few people of his intellectual circle. He exhibited his works in the Jewish Museum in New York in 1968, at the Musée d’Art Moderne de la Ville de Paris in 1970, then in the Museum in Mexico City , in Jerusalem , at Centre Georges Pompidou in 1985, in Tel Aviv, in Buenos Aires , and in many other places.

With his brother Giancarlo he shot the film “Vacanze nel deserto” (1971). He is a member of the Collège International de Philosophie. In 1997 he founded the Fondazione Europea del Disegno (European Design Foundation) in Meina, on Lake Maggiore . His relationship with the sound element has always been close and careful: this is the reason why his thought about the relationship between painting and sound is still topical in the contemporary field of the relationship between sounds and images. Let’s listen to his words in the following interview.

Matteo Milani: Can you tell us about the relationship with music in your pictorial research?

Valerio Adami: When I was a child my mother used to tell me: “Don’t worry, sing happy”. In my family music was part of our daily and social life: my mother played the piano, my father the violin, my grandmother the mandolin and my grandfather the guitar. Every day of my childhood was accompanied by music and the outbreak of the war did not even suffice to threaten this love of music: I still see, as if it were today, the day on which, during the bombardments, it was decided that the piano should be carried from the third floor of our house in Via Caravaggio in Milan , where we lived, to the basement. My mother was convinced that music could protect us from fear.

The Wehrmacht command had occupied the house nearby and when the officers found out that amateur concerts were given every evening in our place, they invited us to take shelter in their basement, much more protected and deeper than ours, during the nights of bombardments.

My brother Giancarlo, the firstborn, played the piano and he could play Chopin though he had never studied any note. As for me, although I did not have any talent for music, I have always felt, till today, the strong need to accompany my life with music.

I remember the passion with which, in the Fifties, I used to read Adorno’s music essays and the perseverance with which I looked for the form of representation, for my style, for my pictorial thought in the twelve-tone compositions, above all in Anton Webern’s scoresMy unreserved love of a kind of music offering itself to a “difficult” listening, like for example Helmuth Lachenmann’s or Savatore Sciarrino’s music today, dates back to that period.

However, my veneration for Adorno was bound to disillusionment: during a long stay in Finland , I had the opportunity to listen to Sibelius, exactly that Sibelius against whom Adorno had so much inveighed, and it was love at first listening. Therefore I painted, as a sort of mea culpa , a big painting with the title ” Finland “, which I devoted to the wonderful symphonic poem of that extraordinary composer.

ater, in the Seventies, during my travels in India , I discovered the classic music of Northern India and since that day ragas have marked my afternoons in the studio, while I paint. In my studio I prepare the colours in advance, one by one, in a great number of mixes, then I choose and match them. I ask the colours to recycle the dross of the drawings; I operate as if I was using a treatise on harmony, like a composer who needs the piano.

Matteo Milani: How did you strike up your friendship with Luciano Berio?

Valerio Adami: I met Luciano Berio in 1956, when we founded together the magazine “Incontri musicali”. It was thanks to him that later I met Bruno Maderna and Cathy Berberian. Luciano was one of my best friends, a music genius. He had an extraordinary talent that did not give him peace: wherever he was, in a plane, on a journey, perhaps in my house in Paris , I always remember him in search of a table on which he could work. He composed till late at night and he started again as soon as it dawned. We had in common a big passion for the sea, too; he was a great sailor, Luciano

Matteo Milani: What do you think about the abstractness of the sound phenomenon, the desire to transcend reality?

Valerio Adami: Music helped my time of working very much. You have to think about each note to manage to listen. In the meantime there is a listening coming from your body, too. Ancient Egyptians said that every part of the body thinks; I would rather say that every part of the body “listens”. I often quote Hermann Broch’s definition of the origin of painting. Unlike Greek-Roman tradition, according to which painting was born in Corinth, from the drawing that the girl of the potter sketched on the wall, by candlelight, following the silhouette of her beloved, Broch maintained that pictorial image was born from music: the rhythm of a primitive piece of music became the form of a tattoo, a sort of dance represented on the body. Till one day the tattoo emancipated itself from the body, it became a representation and painting had its origins. There is a particular moment during which the drawing becomes “real” and it is at that moment that we are freed from ourselves and throw away words and definitions of things. In drawing nature, things, the “figure”, the object of the drawing changes and our intuition becomes the subject. Perhaps this is the ecstasy of ART.

Matteo Milani: Could you explain to us the application of the music principles contained in painting to the conception and structuring of space?

Valerio Adami: In 2004 in Naples I produced, for San Carlo Theatre, the scenery for “The Flying Dutchman” (Der fliegende Holländer), an extraordinary and unforgettable experience, an adventure into Wagner’s thought and above all into his conception of the music space, where time becomes form. What I tried to do in that scenery was to introduce the music drama of “The Flying Dutchman” in a pictorial space, making an effort to reconstruct, with the tools of my style, Wagner’s “view”. .

Matteo Milani: Today the electronic composer is able to create sound worlds without a score. Is it necessary to codify the hearing experience?

Valerio Adami: Most of western culture, not to mention religious tradition, was handed down thanks to memory, without the aid of any material support. I am thinking as well about Indian music, about ragas, music that is not written, which gurus give to their disciples thanks to the sharing, for many years, of a life consecrated to music and music thought. To hand down a music memory is certainly far more difficult than to give it to a written score. A true test of mere abstraction.