Bozar Electronic Weekend. Electtronic Music In The Heart Of Europe 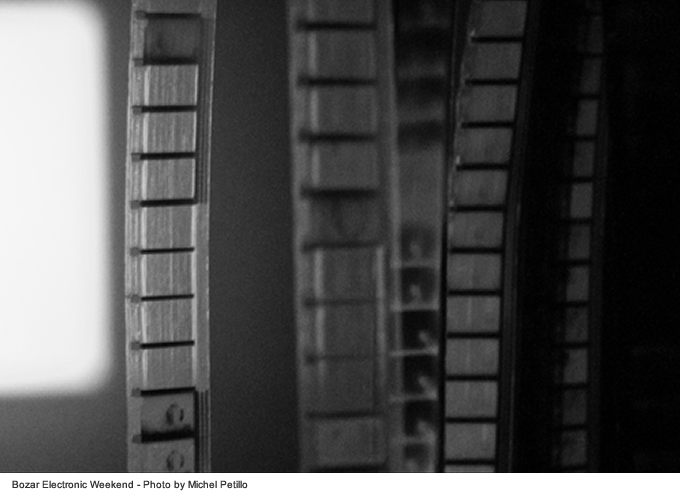 The heart of Europe beats at the rate of electronic music. The proof of that is Brussels, the city that hosted, on October 28th and 29th, the Bozar Electronic Weekend, one of the not-to-miss events for lovers of electronic music and experimentation applied to it. More than thirty, among digital artists, musicians, DJs and VJs, took part to it.

The programme of the Belgian event was livened up not only by electronic music concerts, but also by audio-visual works and multimedia performances. Local artists and their world-famous “big brothers” performed side by side. Plaid, Restie, Nils Frahm, Modeselektor, Blamorhea are only some of the most important partakers. Such names prove how diverse the contemporary styles and trends hosted are – electronics, electroacoustics, minimalism, techno, industrial, soundscapes. No one was missing at the BEW.

The Belgian Festival has also been a good chance to launch their latest records, as it happened on the opening night. The second one was dedicated to the showcase of the Berlin label Monkeytown. Proposing Futuristic sounds in a classical, prestigious, and historical setting is becoming more and more usual for this kind of events. The Bozar cultural centre didn’t make an exception thanks to the creation of a particular, ideal atmosphere for the curious audience eager to find out new talents and frontiers of the ever-evolving field of digital art. 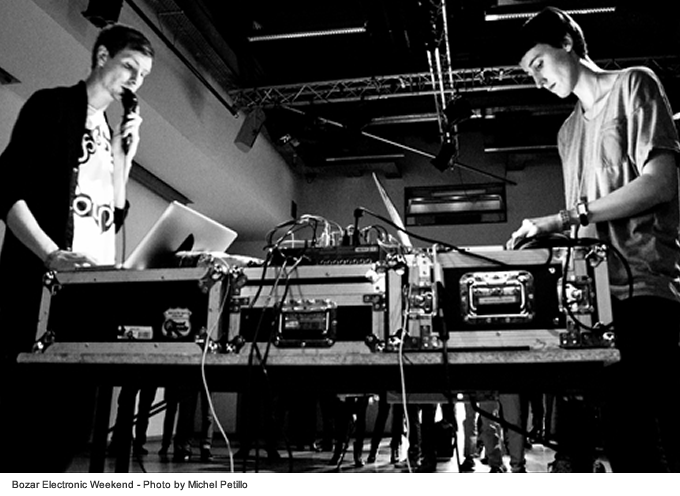 The Bozar Electronic Weekend followed the two editions of Bozar Electronic Music Festival curated by Darko. Among this year’s novelties we found a triad as new artistic direction composed by Bart Dujardin (Jemenfish), Pierre de Mûelanaere, and Xavier Garcia for the music & projection section. We have met one of them, Pierre de Mûelanaere, an active personality in the field of electronic music and Digital Arts of the Belgian capital, to ask him about the weekend event and electronic universe in general.

Silvia Bertolotti: How did you choose the artists for the Bozar Electronic Weekend?

Pierre de Mûelanaere: The idea was to present the best possible image of today musical realities revolving around the so-called electronic field. At the same time we tried to propose a large, coherent selection that could result in an attractive, high-quality program. Here are the guidelines we’ve followed:

– Proposing not-clubbers-only lineups, that could be artistically interesting (as it happened for Modeselektor, who presented his new recording after four years, or the showcase dedicated to the Monkeytown label. And above all, the much expected Scintilli, Plaid’s new album).

– Proposing an image that could mirror the contemporary electronic movement. In this sense, this festival was suitable for a curious audience eager to meet new electronic artists.

– Proposing a festival that could naturally integrate the local reality, its dynamics and personalities (like producers, labels, collectives, and the like) that included among others the Brussels up! Soundsystem or the Kaboom Karavan de Bram Bosteels, or the duo Concert Debout. 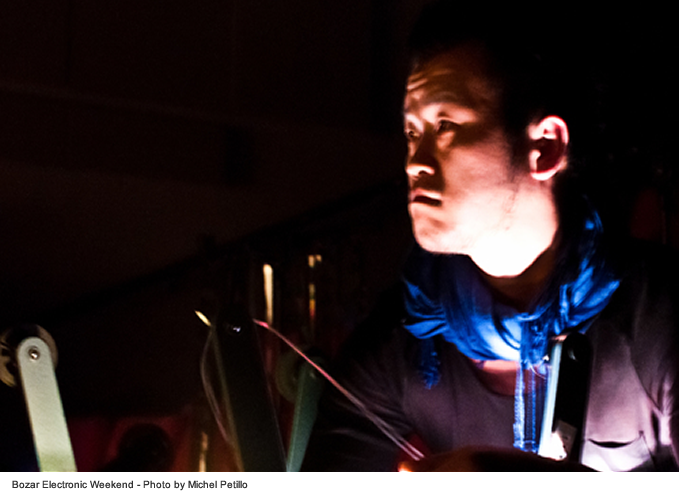 Silvia Bertolotti: Could you pinpoint the main difference between European electronic music and the international one?

Pierre de Mûelanaere: European electronic music is characterized by a balance between the English scenario and the German one. Without going back to the minimal techno, which has become the Berlin trademark, we may say that the first half of the 2000s was marked by the rise of two German labels – Bpitch Bontrol (founded during the ‘90s by Ellen Alien), and Shitkatapult (created by T. Raumschmiere and Sascha Ring). But more names could be in the list. By the way, the electronic avant-garde stemmed from the dubstep music gradually moved to England, specifically to London. The importance of such movement is relevant, beside the history of musical genres.

If the electronic scenario is still quite “local”, especially for what concerns new trends, the creative dynamics often linked to little groups of people and collectives has gained an increasingly global importance.

As a consequence of the fact that the electronic scenario is presently very fluid and international, thanks to the web and the quick rise on the net of new DJs and producers, hybrids of emerging tendencies are increasingly faster and richer. Due to the influence of wonky, the dubstep scenario has rapidly changed, leading to the vague definition of post-dubstep that has become even more experimental and substituted the beat. 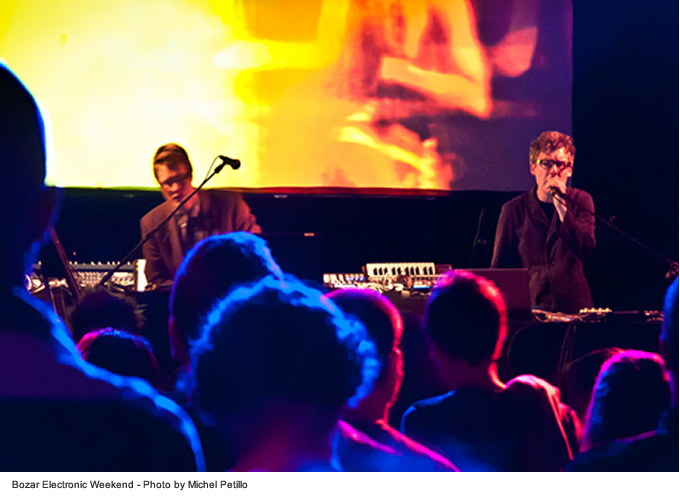 After such evolution – schematically drafted – we are presently seeing a kind of a revival of techno enriched by new influences.

At the same time, we are witnessing a comeback of synthwave/synthpop set in New York, and sometimes called parallel eighties representing a nostalgic sort of tribute by a generation of producers who want to rediscover that musical decade. This field has been shown al the Bozar Electronic Weekend by Stellar OM Source and Ssaliva.

Even the so-called modern classical genre has found room at the Festival with Nils Frahm, an amazing German pianist, composer and producer, based in Berlin, where such trend is particularly prolific thanks to Peter Broderic

The modern classical was represented by some musicians linked to the world of electronic music since the way music is treated and composed is electronic. Among other personalities we find the Dutch Machinefabriek and the Icelandic Olafur Arnalds. 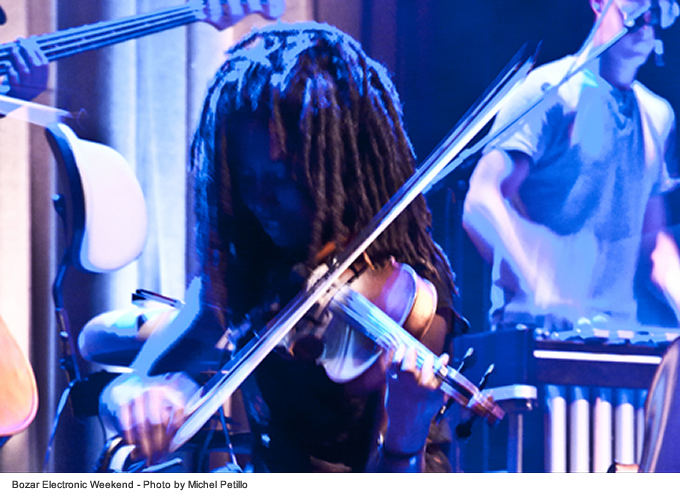 Silvia Bertolotti: What are the major challenges that electronic music has to overcome today, and what are the boundaries of such genre?

Pierre de Mûelanaere: I feel like the electronic field tends to be a little self-referential, retreating in the hype tendency and in its trendy effects. The tendencies that last longer are those that interpret a specific era and express it. Presently, we are far from the big electronic collectives of the ‘90s. Every era has its concerns and producers are concerned too. Since they are artists, they always interact with their political and social context. The dark side of the dubstep (intended in its literal sense, since the early dubstep nights in London took place in almost total darkness with sound systems barely conceivable nowadays) can’t be separated from the social evolution that produced it. The dubstep is a perfect pattern showing how a social aspect, not necessarily visible, can establish itself through music.

Silvia Bertolotti: What is the institutional context of the festival? Was this year’s edition institutionally supported?

Pierre de Mûelanaere: The institutional context of the Bozar Electronic Weekend is strongly marked by the Bozar itself. It is a cultural center, something like the Brussels cultural center par excellence, based in a prestigious building. The desire to create events linked to electronic music inside it has a big relevance in such a context. Undoubtedly, the idea was to disclose its activities to a younger audience, but there is also a kind of institutional recognition of it as a musical style on its own at the same level of other subjects in connection with digital and visual arts. It is not about electroacoustic music, close to more specifically classic expressions, but it deals with the electronic scenario as expression of a present music culture. 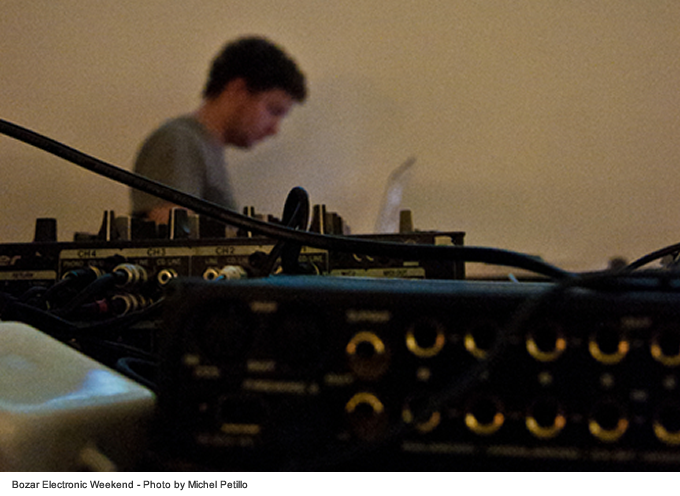 Silvia Bertolotti: Did you find any difficulties to organize the festival? And, if so, which ones?

Pierre de Mûelanaere: The main difficulties have been those linked to what I was previously talking about. Organizing an electronic festival in a (institutional and architectural) scenario like the Bozar can really be a challenge, especially if we think that the electronic practice is something quite new. In some respect, the Bozar represents a very particular space whose sound and circulation features have to be deeply understood. On the other hand, it is a really amazing setting for the audience it attracts as well as for the qualified and motivated team working in it.

Silvia Bertolotti: Is there an international festival or event that you consider as a reference?

Pierre de Mûelanaere: The Sonar is undoubtedly the European reference for the ‘electronic festival’ category. Instead, on a local level I can mention the Domino festival, even if this year’s edition was the last one, or the Feerien Festival which is also organized in Brussels. But I can even say that our festival has no specific reference, everything in it is peculiar– the project, the place, etc. We have tried to create a mix that is one of its kind, but only the future will say if the components are the right ones.

Silvia Bertolotti: At the experimental level, which are the most interesting personalities of this year’s edition?

Pierre de Mûelanaere: At the experimental level, the festival hosted talents like Xavier Garcia, not only curator of the festival but also film curator. I could also mention Stellar OM Source, French-Dutch artist employing analog synths and electronic devices. He just finished a USA tour and his work is produced by the prestigious independent label Olde EnglishSpelling Bee. At Bozar he presented a performance with DMX laser and 3D projections. I could also mention Ssaliva, a genial Belgian producer displaying lo-fi installations, such as distorted samples recorded on old-fashioned VHS videocassettes that have been endlessly duplicated, with lo-fi visuals, glitches and an atmosphere typical of the ‘80s. (http://www.bozar.be/activity.php?id=11703).

Another relevant personality hosted is the Korean Hangjun Lee who performs with the French Jérome Noetinger. It is a 16mm multi-projection called After Psycho Shower, based on the famous shower scene of Hitchcock’s Psycho. Hangjun deconstructs the cinematographic elements of this scene by means of mixed mystic techniques like desynchronization of sound and image, as well as the fusion of sound, time, and space of the projection hall. (http://www.bozar.be/activity.php?id=11702) 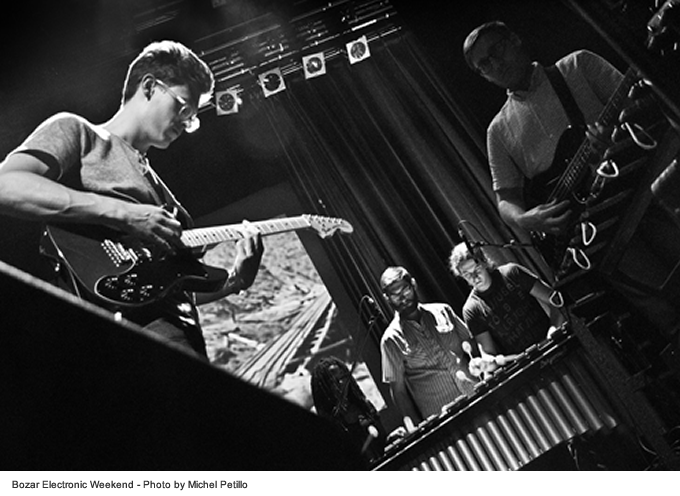 Silvia Bertolotti: What kinds of tendencies, influences, and experimentations will you follow in the future through the festival?

Pierre de Mûelanaere: This first edition of the BEW directed by a brand new team is the starting point of an establishment phase of electronic music in such a context. Presently, we are mainly focusing on developing the musical proposal in a coherent and valid way. Finding out the right way is important as well as getting the confirm that this musical proposal will live up the audience’s expectations, which is another key point. For what concerns the future, I feel like we have to focus on the integration of ambitious projects in collaboration with fields like visual arts, interactive audio-visual installations, developments implying architectonic structures, performances, etc… Otherwise, as for the musical trends, we will follow with big interest what creators will do.