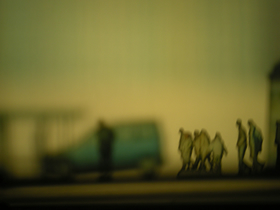 With the title “Cinema Beyond Cinema”, the Multimedia section of Sonar 2008 wanted to offer a look on the different meanings that the word “cinematographic” has taken on nowadays, in particular through the “SonarMàtica” exhibition with the title “Future Past Cinema” and the “Digital à la Carte ” video interactive database.

The redefinition of the concept of cinema, as a perceptive and experiential phenomenon of the image in motion, is a more and more important topic in many festivals dealing with electronic art; it is enough to think about the concept Cinematic Experience of the last Sonic Acts festival in Amsterdam , which took place last February. People find the theoretic necessity of putting the contemporary audiovisual experimentation in a wider and more definite disciplinary panorama, the cinematographic one, by tracking down, in the experiments on the optics and the perception of pre-cinema, the theoretic and technical presuppositions of many present experiences. A reference to cinema as a structure where perceptive dynamics can be established, by going beyond codes and rules that brought to its linguistic definition.

Sonar gets in this direction through an exhibition, “Future Past Cinema”, that, although it does not have pretension to formulate real theoretic hypotheses, makes an interesting comparison between protocinematographic techniques and a selection of live performances and installations of contemporary artists. The project of José Louis de Vicente, Oscar Abril Ascaso and Advanced Music is the second “chapter” of a trilogy that was inaugurated last year and is devoted to the links between the art of the nineteenth century and that of the twentieth century. The exhibition of this year was focused on a comparison between history and innovation, thanks to the exhibition of machines of the nineteenth century belonging to the collection of Tomàs Mallon and contemporary works; this was possible thanks also to the collaboration with the Medialab-Prado and the Cinema Museum in Girona.

This meeting between Sonar and museum institutions gave life to a well-conceived and developed curatorial project, an exhibition where each contemporary work was combined with a model of protocinematographic machine or technique, among which zoetropes, magic lanterns, and chronophotographs. A parallel route among the stages of the cinema origin and present artists that use again and develop those same experiments and those same illusions which contributed to the start of the magic of the image in motion.

Like Utsushi-e, the shadow theatre of the eighth century, which was considered one of the techniques that gave origin to the modern oriental animation, used again by Takashi Kawashima in a live performance, Takashi’s Season, given during the exhibition and combined with a model of magic lantern.

The artists build their set like a shadow theatre, a fairy-tale play of forms that is prepared by the artist in perfect synchrony with the digital backgrounds. A contorted and imaginary construction of forms that find it hard to become a real story, in which the main fascination is given by the mixing of digital landscape and performers, which are both actors and narrating voices.

Another live work that was presented during Future Past Cinema was the wonderful Demi-Pas, a set of live cinema by French Julien Maire, in which the artist literally builds, for the public, a short artisan film, where the projector light illuminates and distils life from mechanical masks hiding small pictures, worlds in motion that are created in real time by the artist, in order to build a story, but also an atmosphere. Through his dream machines, Julien Maire immerses the spectator in a panorama of suspension, poised between the poetry of the screen and the physical reality of the machine that is put into action by the performer.

The installation that was combined with the famous experiments of Muybridge was “We are time. We are the famous”; this was created by Andy Cameron, Oriol Ferrer Mesià, David McDougall, Joel Gethin Lewis and Hansi Rabel for Fabrica. The interactive work, presented for the first time in 2006 at Pompidou Centre in Paris , uses the mechanism, typical of the chronophotography, of the division of the motion in small particles of still time, microsequences of the public who was invited to reassemble and disassemble, in real time, two different simulacra.

Also Boxed-ego was interesting; it is an installation by Alvaro Cassinelli, who creates a kind of contamination between the technique of peep show and the video corridor of Bruce Nauman. By drawing the spectators to spy in a box, which contains a reproduction of the exhibition space, Cassinelli captures their images by means of a stereoscopic system of video cameras. Cassinelli captures, in the box, the spectator’s ego and stages a three-dimensional version of the well-known but always destabilizing paradox of the observer/observed.

The “Digital à la Carte” section offered, on the contrary, a very wide overview of the development that digital technologies and the online spread mode are producing in the audiovisual field, presented through four different projects:

– Homo Ludens on the net by Eric Berger and Laura Baigorri, a series of games, websites and interactive installations through which it is possible to define the story of videogames both as a mass entertainment sector and an evolution in the construction of audiovisual environments and narrations.

– All You Zombies, a selection of videos from the homonymous cinema work by English Jonathan Caouette, created through a selection of music videos that were founded on the Internet, a web version of the found footage technique in which, at least in the version that was presented at Sonar, the artist does not apply an assembly process and an original reassembly of the materials, but gives to the user the opportunity to surf freely from a video to another.

– The Notodofilmfest.com of Bigas Luna, a Spanish competition looking for talented people, which offers, through the means of the Internet, a showcase to authors of music videos and short films.

Finally, Live Cinematic, the section which was overseen by Mia Makela, is, within Digital à la Carte, the project with more interesting works, this thanks to a selection of artists representing the present context of the audio-video interaction in real time, among which Rechenzentrum, Hotel Modern, Transforma and Light Surgeons.

Mia Makela presents, with Live Cinematic, a collection of videos and recordings of live performances of unquestionable level, but preferring the celebration of well-known people from the international audiovisual sector to the search for something really new.