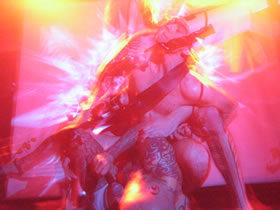 As every September, the 2007 edition of Ars Electronica took punctually place in Linz. Since 1979 the Austrian festival dedicated to digital art and new media has tried to draw the lines that link art, technology and society together. The event has surely always been an appointment that cannot be missed as well as a firm reference point in international digital culture scene.

This year’s subject has given emphasis to an aspect of contemporary life which directly involves any of us: the loss of privacy. In everyday life we unawarely are deprived of our privacy, as security systems and mobile technology devices can watch and record many of our actual and virtual actions. At the same time we awarely give up our privacy every time we surrender to Web 2.0 facilities, which, thanks to the development of special platforms, make us turn our private life into public.

The subject of this year’s Ars Electronica was a suggestion to think about the kind of culture which derives from such a phenomenon and its consequences for social life. Its title, Goodbye privacy, was an invitation to redefine the meaning of private and public life and thus to draw a new line which can clearly separate them from one another.

The festival’s timetable has offered a wide choice of symposiums, exhibitions, performances and conferences. The change of location of some events, due to the sudden bad weather as well as to the restructuring of some buildings which in the past editions had been used for Ars Electronica’s performances, caused some moments of confusion. Linz is rearranging because in 2009 will be the European capital of culture.

The Brucknerhaus, which in the past editions had played a pivotal role for the festival, no longer was the main meeting point and the location for symposiums bacause of its rearrangement; only the Gala and the concert evening took place there.

This edition’s curators of the conferences, namely Armin Medosh e da Ina Zwerger , were forced to be happy with a Kunstuniversität ‘s hall, whose capacity was limited and whose structure prevented those who were sitting behind the first rows to see the big screens. Though not comfortable, the symposiums were interesting. Many orators were invited to talk about privacy: jurists talked about the fundamental rights in the world of communication while activists considered how the Internet could have been exploited by multinationals as a control means to support their interests.

Moreover, Ars Electronica approached its subject from a “physical” point of view, suggesting the mix between public and private in architectonic structures too; to do that urban spaces and festival spaces were blended together along the whole street of Marienstraße in the centre of Linz.

Marienstraße is a narrow street for pedestrians only, bordered by shops which are mostly empty; the street is seldom busy and that is why it evokes a “virtual city” atmosphere. For the whole duration of Ars Electronica that neglected street became the point of reference for the festival’s audience. It was called Second City , turning into one of the many streets which belong to the virtual map of Second Life , with the project by the German Aram Bartholl . According to Bartholl’s scenographic project, some objects taken from Second Life metaverse were reproduced and put into the real street. There were the classic wooden cubes, which are the basic solids for the construction of 3D objects; pseudo-trees made of bidimensional polygons with a photographic texture stuck on them; shopping windows covered with panels similar to those hanging from virtual shops to describe the products on sale. The whole operation was interesting and dangerously played on the border between criticism and celebration of the famous virtual world by Linden Lab.

As far as Marienstraße’s empty shops were concerned, they had been turned into exhibition areas for installations and videos, as well as for round tables and performances, or workshop spaces planned by Bartholl and dealing with the creation of objects coming from Second Life’s metaverse in the actual world.

Among the programmed performances at Second City, that by Eva and Franco Mattes (a.k.a 0100101110101101.ORG), entitled Synthetic Performances was much followed .In an exhibition area within Second Life the two artists reinterpreted three famous performances, namely Shoot by Chris Burden, Seedbed by Vito Acconci, and Tapp und Tastkino by Valie Export through their avatars. The exhibition was ironic and paradoxical and recreated three extremely physical performances in the virtual; that could have seemed simple but was actually challenging. The event could have been followed online on Second Life, o at Ars Electronica on a big screen, with the artists in the flesh controlling their avatars from their computers.

Also in Marienstraße Silver and Hanne Rivrud presented their project Intrigue_E , which is a sort of performance/game focusing on social interaction. According to the project “human avatars”, that is to say people whose actions are controlled by someone else, are placed in a public context. Using the keys of a customized mobile the user gives commands to the avatar who, unseen in the crowd, gets the commands through earphones and acts accordingly. The users can thus enjoy themselves by making the avatar interact with unaware people, sometimes making it behave oddly in that context in order to see the reactions – which could be amused or annoyed  of those dealing with the human avatar. Intrigue_E is an interesting project because it is able to cause unpredictable behaviours.

Not far from the surreal atmosphere of Second City, at the OK Kulturhaus, one of the usual locations for the festival, the works involved in the Prix Ars Electronica contest were exhibited. The prize is divided into six different categories for any of which Golden Nica, two Awards of Distinction and various Honorary Mentions are given.

Among the exhibitions, Park View Hotel by the Indian Ashok Sukumaran , won the Golden Nica in the Interactive Art section . It is an installation which, using programmable technologies for objects and military devices, starts a sort of dialogue between two buildings thus making the audience think about the relationship between public and private space. Originally the project conerned the interaction between those who pass by César Chavez Plaza in San Jose (California) and the adjacent hotel; in Linz, for Ars Electronica, the installation was adapted to the location. Inside the OK Centrum a telescope points towards the opposite building where there are the offices of an agency. Looking through a sight the user can choose a window to aim and to send a laser ray by pushing a button. The signal is received by the chosen office which “replies” by switching on or off the lamps inside the rooms.

SymbioticA is the project which won the Hybrid Art category , and it is an artistic lab dealing with biological research within the Western Australia University Biological Science Department. At the OK Centrum some of the works of the resident artists who use laboratory tools for their research were shown.

One of the projects which were shown was The Slow Death of a Semi-Living Worry Doll G , by Oron Catts e Ionat Zurr . The installation, or maybe it would be better to say the performance, is a semi-living little doll made of synthetic fabrics and polymers placed inside a bioreactor. As time passes, the living cells which constitute the toy grow and deteriorate and Doll G approaches a slow but inevitable death. The work of art is a reinterpretation of a past work shown at Ars Electronica in 2000, when 7 sculptures were created using synthetic fabrics. The artists were inspired by the Guatemalan little dolls legend according to which we can tell our worries to them before going to sleep, hoping the worries will disappear. Seven years later the two artists have “revived” Doll G and then sacrificed her to express their regret about the most difficult moment in exhibiting a piece of semi-living art, that is to say its death.

Among the various projects there is Personal cloaca by Wim Delvoye , the last of a series of installations which the artist created during ten years. All these works are entitled ‘Cloaca’ and they are pieces of hybrid art consisting of devices able to reproduce human digestive system with the only aim of generating fecal waste. The version shown in Linz this year is a washing machine containing a biochemical combination together with the bacterial flora necessary to reproduce the various stages of digestion.

During these years Delvoye has kept on developing his project to improve it, trying to make its output more and more similar to real feces the. So far seven different versions of this ‘generative artwork’ have been created, reminding Piero Manzoni’s work.

At the OK Centrum you could also listen to some musical performances which were part of the Reverse-Simulation Music project by Masahiro Miwa , who won the Golden Nica in Digital Music category. The work is a system able to create compositions through algorithms generated by a computer and then played by human musicians. In that way the usual relationship between machine and performer is reversed: with his work Miwa makes it happen naturally, events based on condition systems and processes generated within the virtual world of the computer.

Using that method Miwa had the compositions created by his system played by orchestras, single performers, choruses and traditional Japanese instrument players. Miwa performed at the Brucknerhaus with the orchestra during the evening that Ars Electronica dedicated to concerts with the title Perfect Strangers.

During Perfect Strangers evening what really struck me was the ending event called Void , by the Austrian group Fuckhead . The four performers’ exhibition was polymorphic; it evoked both orgiastic and mystic atmospheres characterized by strobe lights and dazzling digital images and musical choices ranging from hardcore sounds to sacred music. It was a total, disquieting, but sometimes ironic performance; a ritual on the border between the dionysiac and the apollinarian world. The Fuckhead say their performances work on the subconscious; maybe, with their “technological tribalism” they really do that.

Among the side events, the usual Campus exhibition took place at the Kunstuniversität. While in the past editions the exhibitions had usually shown the artistic projects of a particular school or university in the world, this year many research projects both from the United States and from Europe were there and they somehow had something in common. One of the most interesting sections of the exhibition was called Sacral Design, where the artists – coming from the University of the Arts in Berlin  reinterpreted some sacral objects according to the modern style. For example the Ticker Cross by Markus Kison , a crucifix where the cartouche with the acronym INRI has been replaced by a led screen on which the prices of Vatican shares scroll.

I would like to add that it was with pleasure that I saw an Italian name among Ars Electronica Honorary Mentions, within the category of Digital Communities: the project is called AHA (Activism-Hacking-Artivism), di Tatiana Bazzichelli. Since 2001 AHA has linked Italian and foreign projects together mostly dealing with arts and activism through new independent media. Their work offers a platform to create and promote events through the exchange of projects and ideas.

Tatiana’s Honorary Mention surely was the icing on the cake of an interesting Ars Electronica edition, especially from the networking point of view.