The Fine Art Of Glitches. Cheats And Errors 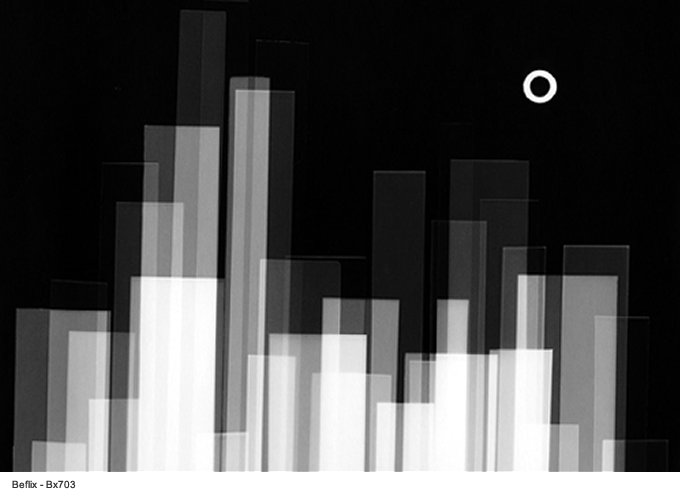 When a new generation of artists looks at Marcel Duchamp famous painting Nude Descending a Staircase, No. 2 from 1912 will they then say: Whoa, look an early example of glitch art! When Duchamp made his painting he left the traces from the person going done the stairs on the canvas. A similar visual effect could be experienced when you have a corrupt graphic card which is not erasing the traces from the moving object on the screen.

For Duchamp it was a way to capture the movement and the speed of the descending person, in the same way Eadweard Muybridge previous had taken series of photos with moving animals and people (for example a nude woman descending a staircase). The futurist movement, with its fascinating for new technology, continued to explore the aesthetic of speed in their paintings of fast cars, locomotives and aeroplanes. Since then technology has continued to fascinate artists, but there are always a backside of the coin.

Not even in the most advanced futuristic illusion is the technology perfect. In a well known scene from the movie The Matrix the main character Neo experience what he describes as a déjà vu, a cat walking twice over the floor. Trinity explains the experience to Neo. “A deja vu is usually a glitch in the Matrix.

It happens when they change something.” Glitches in computer systems creates unexpected events and for us common user malfunction or failure in software or hardware often creates frustration and anger, but for a new generation of artists these bugs, errors and glitches are source for artistic expression. Glitches could be described as secrets doors to the system, its like when Neo in The Matrix sees behind the interface and discover that its built of 0 and 1 and he realize that it can be manipulated and modified. In the same way glitch artist are trying to manipulate the system or looking for weaknesses in the system to go beyond the perfect interface. 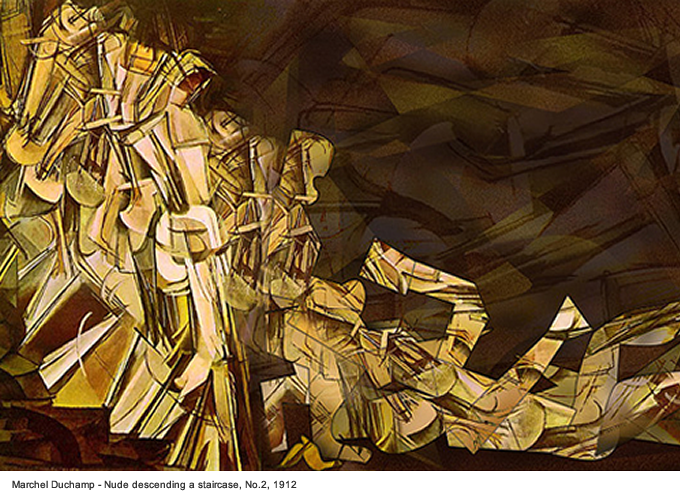 Iman Moradi, senior Lecturer at University of Huddersfield, is one of the leading theorist of Glitch Art and the editor of one of the first books about glitch art “Glitch: Designing Imperfection” ( 2009). We asked him all the important questions about what glitch art is.

Iman Moradi: Tricky to ask this question about when Glitch Art was started or indeed arrive at a clever all encompassing definition of Glitch Art itself. I think at the point where an artist called the “unexpected” the result of a mistranslation, or indeed the provocation of a medium, to produce unexpected results, art became Glitch art. For me it was when I discovered Ant Scott (Beflix) work back in the summer of 2001. For me he legitimised what I thought was pretty cool to begin with and called it Glitch Art. He basically curated found and generated examples of visual glitches on his blog.

They were very tasteful and had an air of humour and emotion about them. I personally started to explore it within an academic context at the first available opportunity that I had in 2003 – 2004 and got in touch with Ant Scott. The ‘Oslo Glitch Symposium in 2002 was I believe, the first formal point where glitch art was being discussed.

Mathias Jansson: In your thesis “Glitch Aesthetics” from 2004 you categorized glitch-art into pure-glitches and glitch-alike. What is the difference between these two categories?

Iman Moradi: I get a bit of flak these days for making that categorisation and perhaps, rightly so. I stipulated that Glitches that are naturally discovered and found are somehow more pure, and the ones that are faked- for example if you paint or draw a glitch, or a design a likeness of it, or create a glitch effect using a plugin, would be a glitch-alike. Sometimes categorisation helps us understand, or divert unnecessary commentary.

One of the questions and comments I used to get very bored with was: its not a glitch if its provoked. Being a visual designer and producer myself, I like to have control over all aspects of what I produce, and aside from the sometime pleasant and unexpected visual surprises I want to roughly know how to achieve a particular effect. For me most glitches that are used in an art context are Glitch-alikes, they are really representations of aspects of glitches framed as art or used within other design contexts for their sheer visual qualities. 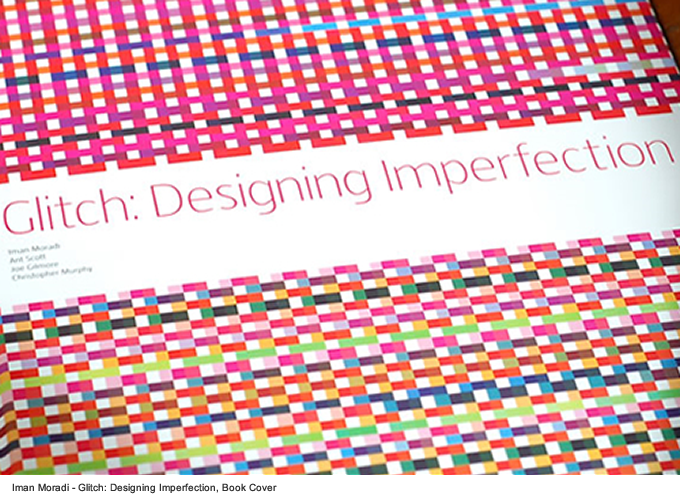 Mathias Jansson: Why are so many glitch artist interested in working with old soft- and hardware?

Iman Moradi: Technology of old used to be more susceptible to being in a state of glitch,  and the trend in consumer electronics is for things to NOT glitch at all, the future is always going to be higher fidelity and higher signal clarity where possible to eliminate all glitches, which is kind of uninteresting. So, as far as old technology and glitches go, I think they two go hand in hand. You have people like Jeff Donaldson, of Notendo fame who modify hardware for the specific purpose of generating glitch visuals for use in performance contexts.  The glitch is also for me inextricably linked with a sense of nostalgia and longing for how things used to be, in that they were imperfect! There’s a lot of character and interest in things that are imperfect; it humanises technology and somehow makes it more human and flawed, like ourselves

Mathias Jansson: Is the any special genre in glitch-art dealing with videogames and glitches?

Iman Moradi: None, that I’m personally that acquainted with and maybe there should be. If its just glitches from games captured by gamers, would you call it art or something else? I do actually get annoyed with the saturation of game related glitch stuff when you search for glitch on the likes of Youtube.  As far as the relationship of glitch-art to glitches goes, there are undoubtedly elements of the glitch aesthetic that borrow heavily from the glitching that some games used to exhibit with dodgy display drivers and such. I’d say Nullpointer’s (Tom Betts) QQQ, was a the first example I saw, of using a particular glitch effect in a modded game which I absolutely loved. 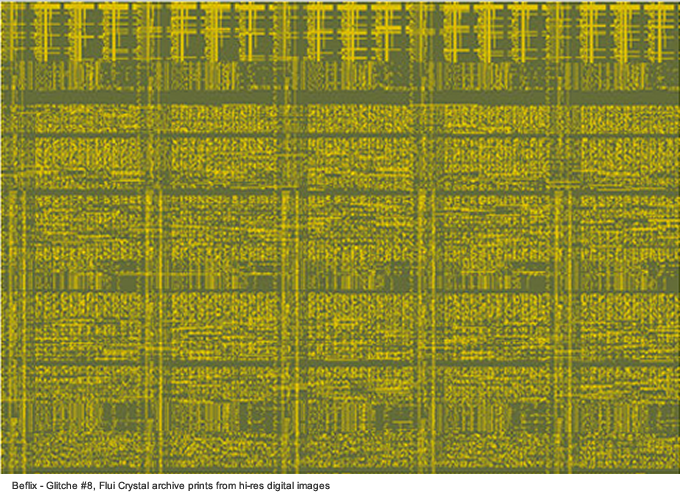 Mathias Jansson: In your thesis about Glitch Aesthetics you compared glitch art with modernist paintings as Juan Gris, Gerhard Richter etc. Could you say that cubist, constructivism etc are result of errors or mistakes during the painting process?

Iman Moradi: I wouldn’t say errors at all. I think initially I was purely looking at finding parallels in the visual qualities, linearity, fragmentation and perhaps complexity and of course aspects of style and composition that were similar. I was basically saying that our appreciation of the visual forms and sometimes the conceptual forms, are rooted in our prior willingness to accept and our appreciation of those established styles and movements.

Mathias Jansson: What about glitch art and the contemporary art scene? Does it have a position in the New Media Art landscape?

Iman Moradi: You only need to look at the fantastic efforts of Jon Satrom, Evan Meaney, Jon Cates, Rosa Menkman, Nick Briz, and other organisers and presenters of of  Gli.tc/h Event (symposium, conference, festival, about noise & new media) to see that the glitch is here to stay and firmly embedded in the new media artscene. I think the book “Glitch: Designing Imperfection”, I jointly edited and which was published by MBP New York in 2009 also shows that the glitch has entered a level of recognition that goes beyond enthusiasts or mere hobbyists, its firmly rooted in academia, popular culture and contemporary artistic endeavour. 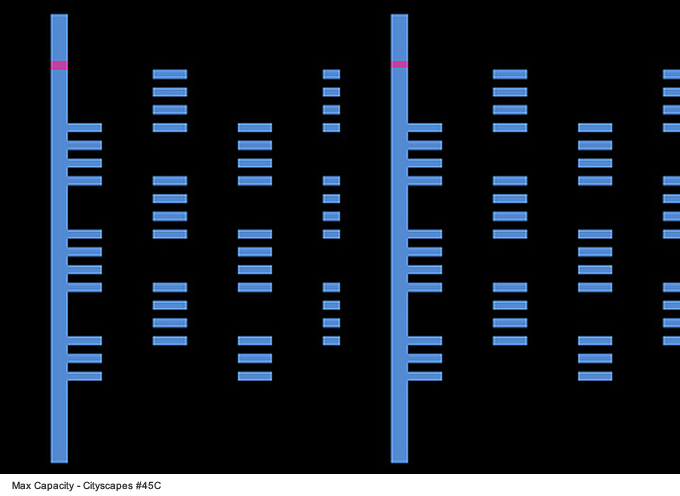 One of the artist working with glitch art is Max Capacity currently living in Santa Cruz, California. Max Capacity is well represented on Flickr with his work. He is mostly working with the old classic computers as NES, Atari, C64 and ZX Spectrum. So we asked him why glitches and circuit bending are so fascinating to work with as an artist.

Mathias Jansson: When did you realise that you could use glitches in videogames as a creative and aesthetic expression?

Max Capacity: I only realized earlier this year that people cared about glitches as much as I do. I was on Flickr and I had uploaded some glitches I captured and I found there were a bunch of glitch-related groups and lots of glitch art already posted across Flickr. I had no idea. I’ve been doing this stuff at home in my garage or bedroom for a while, but I didn’t think anyone else cared.

> Mathias Jansson: What are you looking for when you create your glitch art?

Max Capacity: I really appreciate hardware glitches. I remember trying to watch scrambled pornography on cable TV when I was young. And I remember my frustration with my NES system when a cartridge would glitch out and I’d lose my game. Now that I don’t care so much, I can just appreciate the beauty. I think there’s a certain sort of nihilism and entropy present in glitch art that I think is relevant these days. Decay can be beautiful in it’s own way. 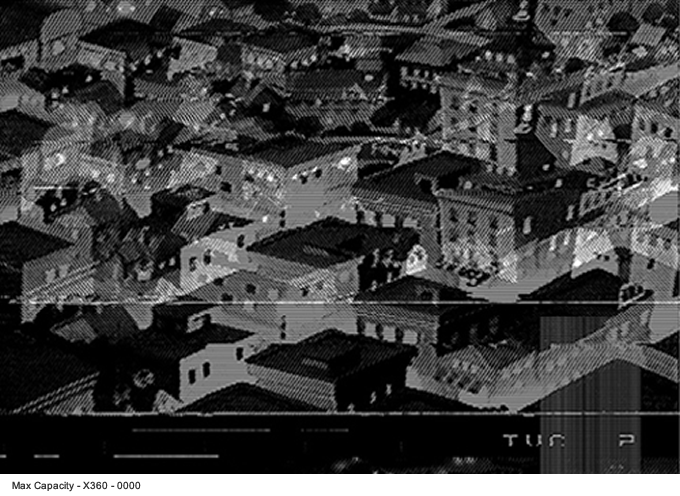 Mathias Jansson: Is there any particular category of games or programs that is more interesting for you to use?

Max Capacity: I’ll glitch almost any game these days, but I always come back to the NES. I’d love to get into some arcade games and circuit bend them a little. But the NES is so accessible. Besides the availability of old NES hardware, there’s also lots of great technical info homebrew hardware and emulators on the internet. I definitely lean towards NES games attached to movie franchises, or ports of arcade games.

Mathias Jansson: Glitch theorist Iman Moradi distinguishes between two categories of glitches; the pure glitch (“the result of a Malfunction or Error.”) and the glitch-alike (“produce and create the environment that is required to invoke a glitch and anticipate one to happen”). How do you see on these categories?

Max Capacity: At first all my glitches were accidental and I thought they were worth capturing. But I quickly got tired of waiting for them to happen and started to make them myself. I think it’s easy for me because most of the stuff I use is already half-broken. And I don’t take good care of my electronics. So the difference between a cable accidentally being plugged into the wrong place, or purposefully being plugged into the wrong place is mostly academic to me. The accidental glitches are a great place for me to start experimenting from. The good part about it is that I used to try to make things work and I’d be frustrated that they didn’t work. Now I try to figure out new and novel ways to make things break. It satisfies my appetite for destruction and my creative drive at the same time. 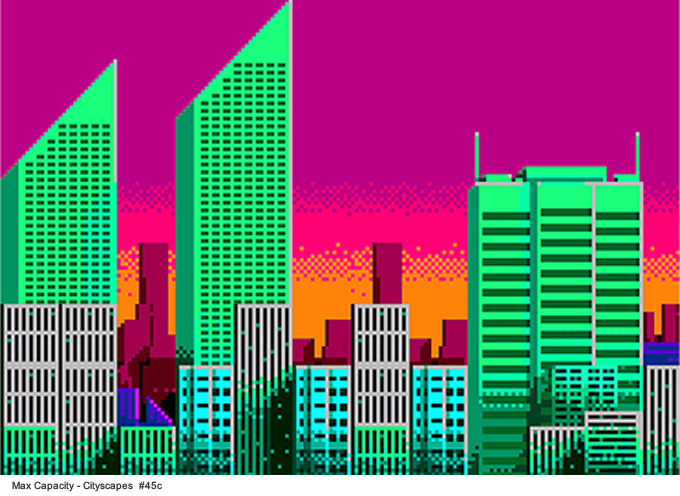 Mathias Jansson: How do you experience glitch art on the contemporary art scene?

Max Capacity: I don’t really experience glitch art in the world much at all except what I see on Flickr or Tumblr. I mostly stay at home and play with my electronics and computers. Like I was saying earlier, I didn’t even know glitch art was popular with anyone besides me. I think glitch art fits in under the umbrella of avant-garde. And probably similar to lots of historical movements like cubism. I try not to think about that too much. I love looking at all the glitch art on the internet, that always gets me excited. I get a lot of inspiration from video art from the 70’s and 80’s. But I think it was the scrambled pornography and glitched Nintendo cartridges that really make me do it.