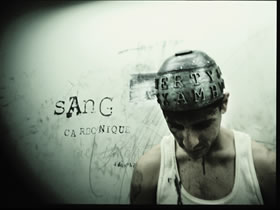 The recent release of a wonderful DVD (presented during the Elektra Festival in Montreal and now distributed worldwide) represents the newest chapter of Silent Room, a work by Canadian artists Skoltz Kolgen, started in 2003 and presented in different ways over the years, from video installations to AV live cinema.

Each one of these forms has been a different approach to re-think the original flux of audiovisual poetry, and to experiment various ways of narration. Moreover, the new DVD features a very stylish packaging, with a double inside content (audio cd and video dvd full of extras regarding the backstage of the work) and a three-language booklet: English, French andItalian! – enriched by astonishing pictures.

“Ce ci n’est pas un film”. Paraphrasing Magritte, Skoltz Kolgen introduce the viewer/spectator through rooms that constitute the film-poem Silent Room. The conceptual game, built linking this work to the cinematic medium and denying it at the same time, resumes important aspects of the artwork: in between videomaking and filmaking, it highlights the connection between some features of experimental cinema and the latest developments of audiovisual language, from video art to livemedia performances.

Silent Room lies in the interstices between different cathegories of the audiovisual language. The film, the movie, are used by Skoltz Kolgen to rethink one of the first fundamental characteristic of cinematographic language: the construction of a story. Each room is a ‘ tableau vivent’, a core that forms, together with the others, a modular form of storytelling, a narration composed of disparate elements, compounded time after time in constantly different paths, created by the viewer moving through installations or DVD tracks, or through the remixing of live materials, mixing characters’ identities on five screens. Each life and story is a lonely monad, characters don’t show themselves, their stories are dumb, just joined by their separateness, by their enclosure in a state of being which is pure existence.

The similarity of their condition constitutes the link that helps find a common trace in the multiplicity: Silent Room is in fact a compound by element; nevertheless at the same time it is a poem, an organic work on loneliness, in which every room is a shade over the theme of alienation. Each character is surrounded uniquely by his own self, in a condition where the environment itself and the objects around become embodiments of the psyche.

Skoltz Kolgen use the object in a surrealistic way, abandoning functionality and turning it into a symbol, a lexeme of a language deprived by words, useful to write “skies of silence” allowing the audience to feel the mental space in every room. The physical body of each character, too, becomes filter and manifestation of inner states. The alteration of the body talks is an organic externalization of existence’s anomalies. At the same time each body is the metronome of a circular and claustrophobic time, by way of repeated loop gestures and meaningless rituals.

The Canadian artists describe, using close shots, details that mix 35-mm footage, digital video footage and photography, a time and space simultaneously product and cage of the same room, being both the psychological projection of the character. A visual approach that does not talk but lets itself be deformed, overwhelmed by the observed reality.

Claudia D’Alonzo: How was the concept of Silent Room born?

Skoltz Kolgen: Honestly, Silent Room took shape gradually. First, we started with drawings, sketches on paper, without a clear intention; we took our time and relaxed, in the morning during coffee time. As a way to stretch our life rhythm and dedicate time to introspection.

We gave shape to human bodies with pencil and coal-chalk, emotive impressions, stretched forms, distorted as their inner state would have morphed their physical shape. Finally we met with a great number of concepts that, time after time, encouraged us to proceed. Some of the themes have collapsed, creating associations and most of Silent Room ones started to have their own profile.

Claudia D’Alonzo: How did you find the characters? Which is the meaning of the structure given by the rooms?

Skoltz Kolgen: The discussion about our drawings lead us to imagine and extrapolate certain situations, locations, characters. We wanted to create audiovisual snapshots for each character in his private life, his own room. Following our intuitions, illustrate the moment when someone projects himself in his interior life due to seclusion. It slowly transforms until it becomes an extension of their own state of mind. The place they live becomes a shelter with no witnesses, where they can, without any external interference, develop an ever more one-way psychological behaviour. Walls become their limits, objects reflect their personality. As if the room were the extension of their interior self.

Starting from these themes, we have elaborated some mini flexible storyboards. These abstract portraits have inspired context, aesthetic environment and creative focus of each room. Once begun, it was immediately clear we weren’t looking for a rigid and linear structure, rather helix constructions and temporal abstraction. This process is situated between the tableau vivant and poetry.

Claudia D’Alonzo: How did you make shootings, built up the set and how did you edit the footage?

Skoltz Kolgen: Concerning the set, we improvised a studio inside an old clothing factory in Montreal . We locked ourselves up in the factory for more than a month. Every morning, we built up the set, we chose the personal props and at the end of the day, until night-time, we shot with the actor. We focused generally on one single room shooting per day.

First of all, we did a casting to find the actors. We didn’t want profesionals, so we did casting in the streets and met people. It seemed more suitable for us to find peoplewho were naturally and physically similar to our characters. So, we especially concentrated on how spontaneous they were during the shootings. Regarding the objects, furniture, clothes, tapestries, we found many things in fleas markets and from old boutiques, second-hand shops and so on.

About the shootings, we wanted to film with many simultaneous optics and points of view. We built up some synchronized camera systems. At the same time, we wanted to mix and compare a digital style with a more organic one of 35mm footage.

Claudia D’Alonzo: What kind of link were you looking for between images and soundtrack? How did you work on sound?

Skoltz Kolgen: There were many working methods on sound as many rooms we had. For some of them, we had already imagined a sound-base during the shootings. For others, the sound architecture was built up before editing and we developed software to link the movement of sound to assembling. In other rooms, like Usure du temps, the soundtrack was created in parallel with assembling, in a very intuitive way. Each sound track was tailored for each room, and all the sound sources were created by us

Claudia D’Alonzo: In some videos there are animals. Do they have a specific symbolic value? Is there a link between animals and bodies?

Skoltz Kolgen: Honestly speaking, we didn’t have any specific will in working with animals. They were present since we started drawing. So, putting togheter all our preliminary drawings, there were many animals. I think we were interested to the human/animal relationship, in its particular developments. But also in comparing the human and animal condition. There was probably the idea of pet animals, take to the extreme, and of progressive mimetism of animals and humans in an extended cohabitation condition.

Claudia D’Alonzo: How do you use the original material for the Silent Room presentations (Dvd, installation, live set)?

Skoltz Kolgen: The original idea was to project every chapter in the old hotel rooms in Argentina . Try to imagine the smell of these rooms, their faded walls and flower tapestries, the beds, the old objectsThe audience would have chosen the floor and the room numbers. They would have sat down on Milka’s or Rudolf’s bed and they would have a projection of what the room had once been, surrounded by the character’s private objects.

The idea was stimulating, but it seemed risky for us to approach contexts which allow this kind of distribution. So, we simplified the concept and we decided to make a linear version with all the tracks, in one whole sequence, to present the art piece within film festivals. In this version Silent Room was projected for more than 3 years. On the Dvd you can find this version, together with unreleased tracks which had been excluded from the festivals’ version.

The Italian festival Transart in Bolzano gave us the chance to present Silent Room as an installation. We used some rooms in a barracks in a military camp. We prepared every room with some objects and animals which introduce elements of the rooms’ intimate universe in the space. Each character was in the room via the video projection. The audience moved from one room to another through some corridors and could stay in the room as long as it wanted. . Fruition was so completely different for each spectator, depending on one’s chosen path and rhythm.

In the performance finally, everything is much more intense, because we use 5 projectors simultaneously. This allows us to compare together the identities of more characters. We opted for a surrounding sound system, so the emotional tonality is very dynamic.

Claudia D’Alonzo: Silent Room is a film-poem. It is an extremely poetic art piece, if we consider poetry like an impulse to a deep introspection, a reflection on individual and his existing condition. Do you think that poetry has a role inside digital art today?

Skoltz Kolgen: Digital art is the use of the computer power to create artistic works, with or without poetry. Reconsidering poetry notion inside contemporary digital art, and organic addition inside digital processes, is fundamental for us.