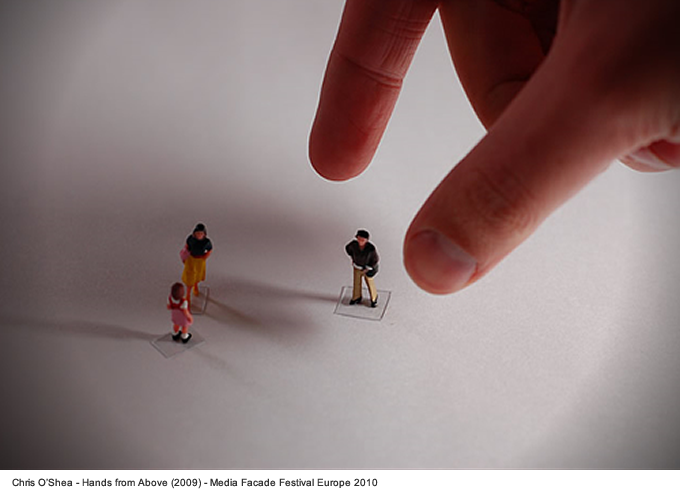 Chris O’Shea is one of the most popular international graphic and interaction designer, based in London, whose work focuses on the possible interaction mechanisms between man and machine, as well as on the design of artistic works, often by dimension of play and irony, that bring into question our sense perceptions and common experiences of the outside world.

In addition to pursuing his career as an artist, Chris O ‘Shea has been curator of the exhibit Cybersonica in 2006 and he is the founder and creator of the project Pixelsumo, a blog dedicated to digital culture, generative graphics, installations and interactive art. For many years one of the references in the Web as well as a privileged observers on artistic creativity through the use of interactive software and hardware technologies.

Among his most important works, we can not forget Beacon (2009) and interactive kinetic light installation created with the Cinimod Studio. Beacon uses a grid of emergency lights that light up in relation to the movement of the spectators walking into the space. This project uses standard industrial lights specially modified to be controlled independently.

The lights use inputs from different thermal cameras that have been adapted to record the movement of people into space. It uses standard technologies for industrial use, put in relation to human behavior and its dynamism, in a playful and active involvement. 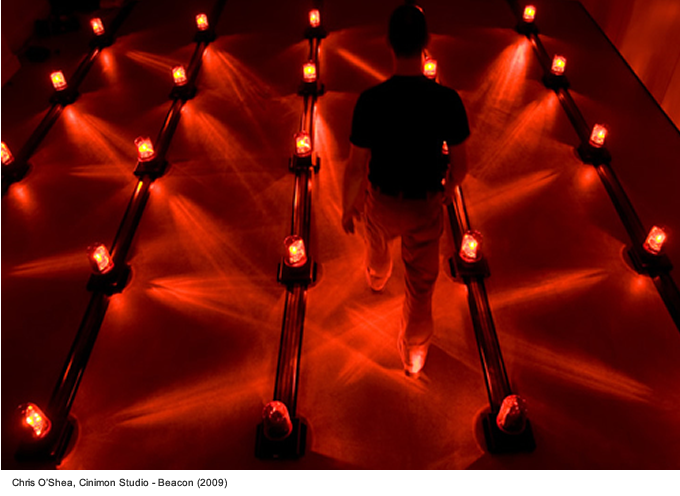 O’Shea was also co-founder, with J. Gethin Lewis and A. Muller, of another project in 2007 called This Happened, launched in London and still active along with a dedicated website http://www.thishappened.org. This project brings together a series of events around everything is going on “behind the scenes” of design. Interaction design is the field of This Happened to look open and cross the boundaries of a world, the one of business and design companies, sometimes too close to the outside. Events, presentations, debates and discussions to explore the background of a product and its creative process.

“Having ideas is easier than making them happen”, the authors write on the website. The exploration of the concept behind a product and its production process is an essential contribution to the future design of new objects. For this reason, it becomes important to develop methods and productive ideas. This is the idea behind This Happened , which sees the participation of every person who wants to contribute to any of the events in different countries around the world, following the settings of a 2.0 blog. Everyone can participate, from students to professionals. In this case, the interaction becomes real involvement.

Coming back to more artistic works and installations, other projects by Chris O’Shea were Cybrid Landscape (2004), in which a three-dimensional landscape is created from physical space through the interaction and Out of Bonds (2007).

His most recent performance took place in Brussels, within the Media Facade Festival Europe 2010. Hands from Above was an interactive and playful work, presented through an urban screen. During the performance, passers-by are seen projected onto the screen and grabbed, rolled and moved in real time by a large red hand. The “playful manipulations” are influenced by the physical movement of people and the weather outside. Passers-by were playfully disturbed during their daily activities and put into an artistic dimension, inside their own daily lives. 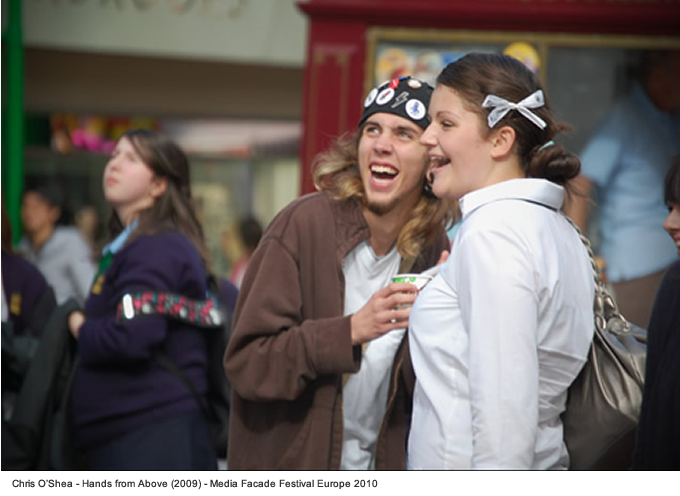 With Chris O’Shea we talked about this last project, meetig him in Brussels during the wide urban exhibition touring through different European cities from the last 27th of August to 3rd of October 2010.

Silvia Bertolotti: How Hand From Above has been realized, starting from the idea?

Chris O’Shea: Once the project had been commissioned, I had set about planning how the software would work. I programmed it in c++, using an open source toolkit called openFrameworks and image processing using openCV. Having used cameras in my work many times before, I had also built up a set of code libraries that I had wrote to achieve various tasks. The first test of the software was just a live video feed, a static image of the hand that I could position with the mouse. It was interesting to see people even reacting to that, and of course enjoying seeing themselves on screen. My first real test of the work on the public was the day before the launch, because the time scale was so short.

Silvia Bertolotti: Where did the idea and the inspiration for this work come from? What’s the main point, a part the fact of questioning about our daily (and unquestioned) routine?

Chris O’Shea: The main idea was that I wanted people to feel small, that there was this other being that could pick us up or squash us.  Changing the daily routine was mainly due to the location of the screens in public space, getting people to stop and enjoy something whilst on the way to the shops.

Silvia Bertolotti: Hand from Above has been presented in many cities, including Tokyo, London, Korea for the INDAF Festival and recently Brussels, in occasion of the MFFE. Which was in your opinion the most interesting location? Could you describe the different reactions from the audience depending of the world place?

Chris O’Shea: Actually I don’t have a favorite location. Each screening had its own interesting context for display, from shopping centre to arts festival.  People have generally reacted to it in the same way in each location, there seem to be no cultural barriers so far. Everyone walks away smiling. 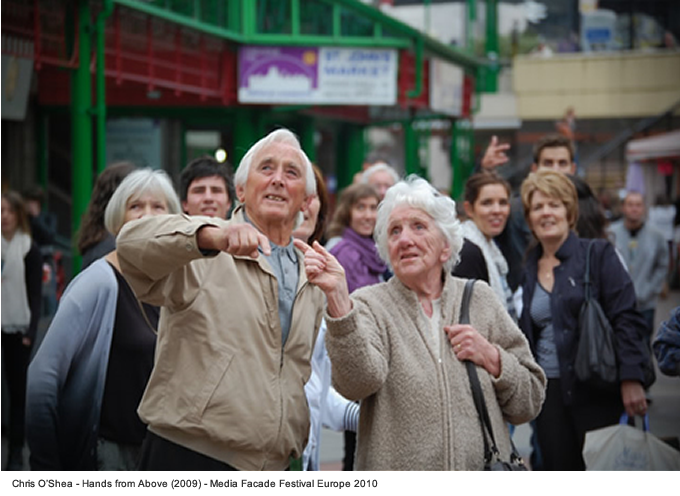 Silvia Bertolotti: In general, and in these two mentioned works in particular, you focus on interaction. Which is the role of technology in the interactive art? Do you believe in a sort of “digital art 2.0”?

Chris O’Shea: For me the technology in my work isn’t important and is not the focus of the work. Although it’s obvious technology is used, its hidden away and not explained to the user.  The focus for me is the human aspect, the way people behave.

Silvia Bertolotti: The emphasis in some of your works is also the play. Which is its dimension?

Chris O’Shea: Play is important, to all ages, as its how we learn how the world around us works. Like art, it can also make us think differently about ourselves. In my works I hope to take people out of the everyday and fill them with joy and wonder.  I aim to stimulate curiosity, allow people to make believe, explore and discover their imaginations. More importantly, to smile.

Silvia Bertolotti: Getting back to Hand from above, why did you decide to perform in the urban spaces?

Chris O’Shea:What I like about the outdoor screens is that you can reach an audience that perhaps wouldn’t normally go into a gallery or museum, it makes it more accessible. 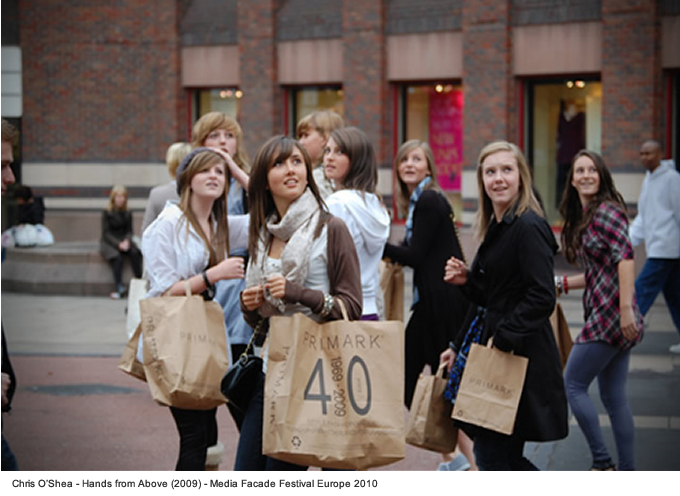 Silvia Bertolotti:Any plans for the future? Are you currently working on something new?

Chris O’Shea: Yes always but I can’t say anything about it until it’s ready 🙂 Perhaps watch my website and twitter @chrisoshea to see when new projects are posted.