If Not You Not Me. Annie Abrahams And Life In Networks 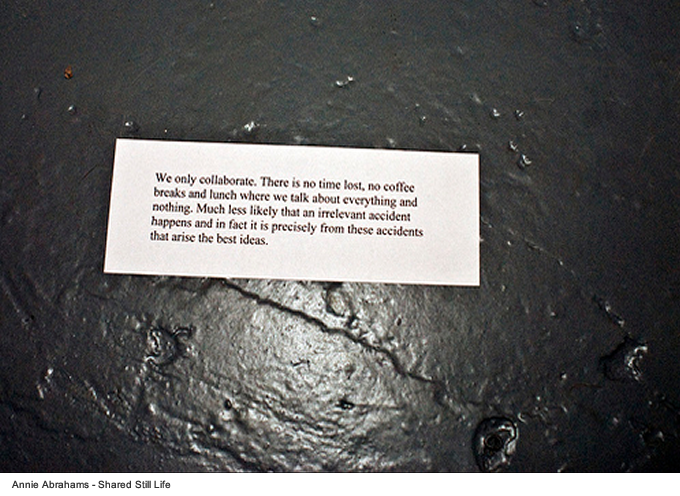 Annie Abrahams‘s show If Not You Not Me at the HTTP Gallery in London (12 February till 20 March 2010) was inspiring in its subtle, low-tech sensitivity of inter-connectedness. This was Abrahams’s, a French-based pioneer in the field of networked performance, first solo show in the UK. Abrahams created three new works for the show. Documentation of several of her previous projects, including some of her most well known pieces such as One the Puppet of Other (2007) and The Big Kiss (2008), was also effectively displayed.

Amongst the new works created for this exhibition, Shared Still Life/ Nature Morte Partagée, appeared to be the central piece. This was a telematic installation that connected the HTTP Gallery in London with Kawenga – territoires numériques in Montpellier, France. The piece was extreme in its simplicity, almost stark ‘nakedness’: a table, a cloth, a plant, some fruit, a clock, a dictionary, and an LED display were more or less the objects that formed the still life composition. 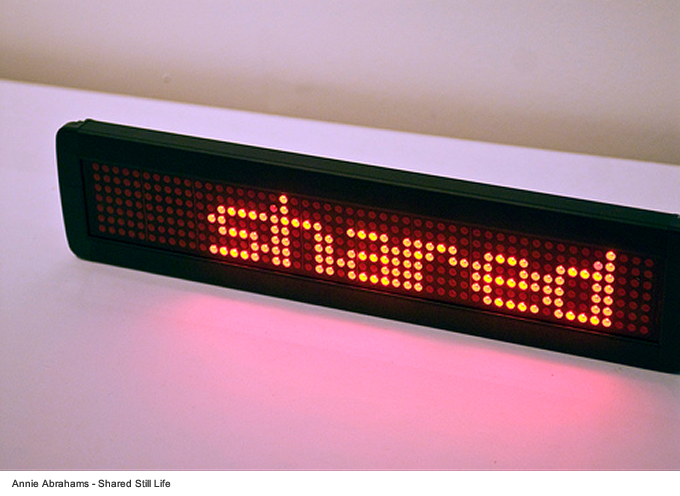 There was also paper, marker pens, crayons, and blu-tack, inviting visitors to contribute paintings, messages, marks, written traces. Furthermore, visitors could compose their own messages for the LED display, as well as interfere with the installation in any way imaginable -since there were no guidelines telling us what we could and could not do with the still life or, indeed, our own presence in front of the camera.  Visitors unavoidably became actors in this piece: to reorder the objects on the table one had to stand in front of the camera contributing fragments of one’s body (a turned head, a hand, one’s back).As the still life was shared (people in London could see the still life in Montpellier and the other way round), new LED messages or re-orderings of the still life arrangements at one site provoked responses at the other.

Abrahams’s piece cannot be described as innovative: Kit Galloway and Sherrie Rabinowitz created the first telematic “public communication sculpture”, Hole-In-Space, in 1980, using satellite technologies. Hole-In-Space linked the two coasts of the Atlantic for the first time, bringing together people from New York City and Los Angeles in life-sized, televised images. Since the emergence of the Internet, telematic art and performance has become widely accessible and rehearsed, with iconic works such as Paul Sermon‘s Telematic Dreaming (1992) and Telematic Vision (1993), and performances by the Chameleons (UK) and AlienNation Co. (USA), amongst many others. With skype and other internet telephony protocols linking us to dispersed family and friends, teleconferencing has become a commonplace feature of our everyday lives.

What is it then, one might ask, that makes Abrahams’s piece -so simple, almost ‘basic’- poignantly relevant today? To me, it is the stark simplicity and understated ‘nakedness’ mentioned above that makes this piece moving in its subtle, and often futile, attempt at interconnectivity.  Abrahams’s Still Life is commonplace, messy and malleable. It is about the ‘banal’ reality of everyday life, time passing by, people crossing paths in fractured, desperate or indifferent attempts to communicate. This everyday quality opens up Abrahams’s Shared Still Life to movement, dust, miscommunication, and shared absence. 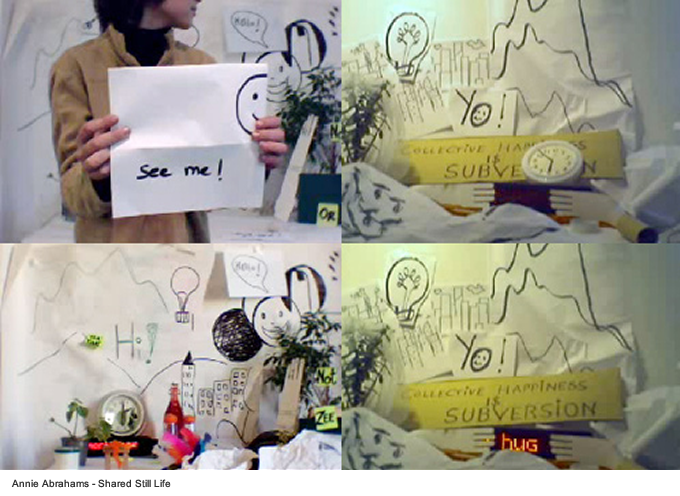 I spent more than an hour playing around with Shared Still Life at the HTTP Gallery. It was no more or less interesting than real life. I observed. I interfered, changing things to my liking. I hoped for a message, a sign of life on the other side, some response. It didn’t come. I sent more messages. I ate some of the composition’s fruit. I made balls of paper and threw them at the beautifully arranged tablecloth.I added the peeled skin of my fruit in the mess. I smiled at the camera while consuming the last slice of the Shared Still Life’s mandarin. Nothing happened.

Nobody told me not to touch (or, indeed, consume) the artwork. Nobody prompted me to interact either. Finally something happened. ‘Tu es la?’ (Are you there?) I had written in the LED display. ‘Oui, oui, je suis ici’ -came a message from the other side. Someone was there. Someone rearranged their own still life composition. Someone was trying to speak to me. Too late -I didn’t really want to respond any more. I didn’t want to have a dialogue with this someone.

This piece, to me, was as much about communication and exchange, as it was about the lack thereof: shared absence, shared loneliness, the hope for someone’s presence that never fully materialises (not the way you had hoped to, at least, not the way you expected). Someone’s fragmented presence, delayed, compromised, fleeting, crosses your path for a moment, in an attempt to link, to communicate, to exchange. Will it happen? The answer is subject to randomness and luck. And lack. I appreciated the freedom that Abrahams gave me, the viewer, in her Shared Still Life: she allowed me to be there with others, but also on my own; she invited me to communicate, and to hide; she did not stop me from consuming the artwork, or messing it up to leave my own traces, banal and everyday -as banal as the piece itself; as banal as life, and relationships.

This was a piece about connectivity that was as fully functional in connectivity’s absence, as it was in its presence. No superimposed expectations, no stress to perform, no euphoric projections into a shared future. Just the simple, fragmented, unsatisfactory, fleeting exchange of everyday life. I found Abrahams’s Shared Still Life a moving and poignant piece. 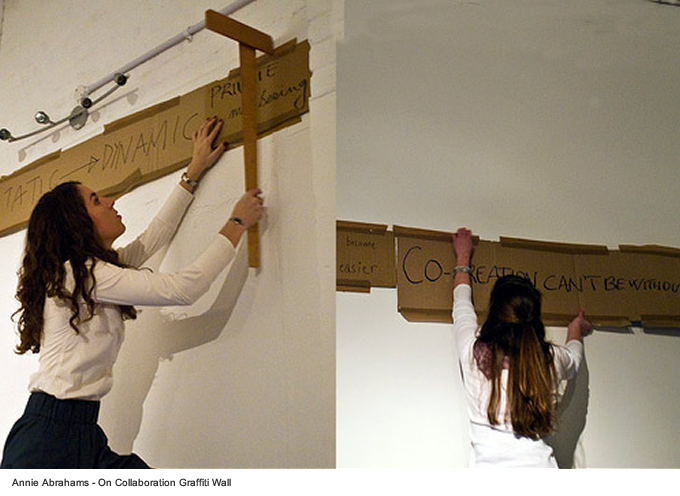 On Collaboration Graffiti Wall was a collective text and speech performance that invited reflections around the notion and practice of online collaboration. Having missed the performance, which took place at the opening, I was left with more fragments, traces of past discussions and other people’s thoughts that I did not know how to share, how to respond to, or what to do with. Hand-written pieces of cardboard with fragments of online conversations or shared thoughts about collaborative processes were covering the walls of the gallery.

Graffiti Wall was, yet gain, a messy trace. Abrahams was clearly not concerned with the aesthetic manipulation of those words and phrases that were hanging there, on the gallery walls, all around us. Once again I felt that Abrahams, as an artist, is in the business of exposing the numerous frustrations that relationships (especially mediated ones) are packed with, while at the same time celebrating the potentiality of inter-subjectivity, connectivity, collaborative practice and exchange. On Collaboration Graffiti Wall left me with a sense of the really messy, frustrating process that (online) collaboration can be, as well as a sense of the richness this process -I know- holds. Abrahams had yet again demonstrated her utter lack of interest in ‘tidying up’, packaging, presenting or beautifying the debris of human communication -mediated or not.

Huis Clos / No Exit – Jam was the final new piece that Abrahams created for this show. Again, having missed the live performance, I was left with traces of past actions. In this case, the actions involved four women, dispersed across the globe, jamming together in an attempt to create a unified sound performance. The artists Antye Greie (Finland), Pascale Gustin (France), Helen Varley Jamieson (New Zealand) and Maja Kalogera (Spain) had to contest with the inevitable time delays that live composition of this type entails.

This is the one piece that left me with a desire to have been present at the performance itself: unlike On Collaboration Graffiti Wall, whose traces were as important as the performance of placing them on the gallery walls, the soundscapes I listened to from Huis Clos seemed more like the documentation of something past, than a piece that was as ‘live’ and/or complete in its trace as it was in its real-time performance. 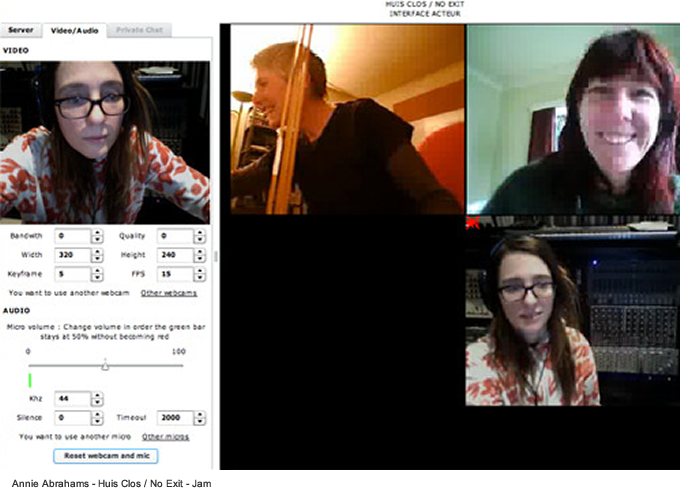