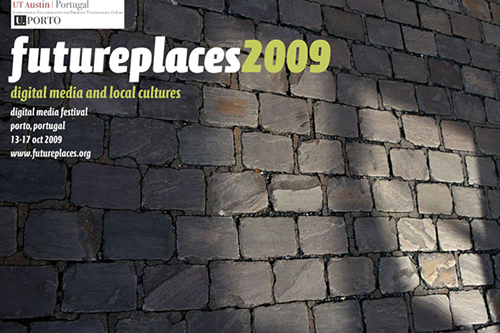 Future Places  Digital media and local cultures was held in Porto from the 13th to the 17th October. It is a festival, a meeting made up of a series of lectures and concerts, an exhibition, a place in which people congregate in order to discuss technology and creativity. It had two official sponsors: The University of Porto and the University of Austin, Texas.

The subtitle chosen for this festival refers to local cultures. This is what attracts this Lusitanian melting pot, conceived by Heitor Alvelos, curator and professor at the Fine Arts Academy of the University of Porto together with Karen Gustafson, the correspondent from the University of Austin, Texas. According to its definition, Future Places should be a “meeting between people who have a question in mind: if digital media can do so much for the development of global communication, knowledge and creativity, what can it do to help the development of local cultures?

As we all know, festivals and biennials were created in order to build up expectations and in order to give voice and international visibility to areas and cities considered to be “marginal” or “up and coming”. An example of this is Documenta by Cassel, an exhibition born in Germany in the years after the Second World War to provide a clear sign of the rebirth of the German nation (after its defeat and the post-Nazi devastation). starting from its culture. The same can be said about all the other biennials already established and still to be created worldwide in the future: just consider the Dakar biennial, a well-known event about African contemporary art which is clearly described by the president of the nation as “a tool useful for attracting tourists”. The same can also be said about art, poetry, literature, philosophy, maths and science festivals which have become more and more widespread over recent years. After the fall of the Wall, the new Berlin owes a lot to Transmediale, a video festival born in the early 90’s which helped in the creation of the image of a city of culture , a young city as well as a new European capital.

Future Places follows this line of thought: with its over 200 thousands inhabitants Porto is one of those “marginal” areas mentioned above (and, what is more, located in a marginal country, Portugal, the “finis terrae” of the Old Continent). As a mater of fact, Alvelos, the skilled art director of the festival, has been able to transform this condition into a statement now considered one of the most brilliant elements of the event.

Future Places did not want to repeat the experience of the other well-known new media festivals which are based on the presence of the usual famous names who are constant guests at international new media festivals (Isea or the above-mentioned Transmediale, Mutek or Sonar, to be clear). On the contrary Future Places bases its programme on the participation of local entities which, for a few days, open their doors to give voice to presentations made by artists who come from all over the world but, at the same time, are closely linked to the territory.

The most glamorous guest was Golan Levin, who presented his work in a panel entitled Aspects and strategies of contemporary media and its impact on locality during the conference organised and held in the ancient Rectory Building in Porto(which is still being renovated).This conference was actually the final phase of a workshop which lasted for a few days and was organised for the students of Porto. More interesting, at this conference, was the presentation of some local projects like Wikimap Galizia Culture by Silvia Garcia or D/Y digital creativity by Luis Saramento. Although the audience was there to listen to Levin (who presented a conference very similar to the one I had already listened to some months ago in Modena at Direct Digital), they then found some other presentations and debates coming from their own local region rather more interesting and up-to-date.

As pointed out by Heitor Alvelos, the presence of representatives of 15 Fine Arts Academies coming from all over the world (one was me who arrived in Porto as a representative of the Academy of L’Aquila) helped to create a network of contacts between experts interested in the same subjects and methods whose aim is to try and form a European network which could lead to the creation of some collective and participated educational models based on the exchange of professors between different institutions. The justification for the design of such a project was the participation of Transmedia, one of the first European post-graduate Masters which works on the idea of training artists to start from a concept rather than techniques or media.

The principal events of the festival were two concerts held at the House of Music and an exhibition held at Maus Habitos, a social club on the top floor of a modernist building located in the centre of Porto. The squat aesthetics of many of the installations and the old school community centre atmosphere of the Maus Habitos café provided a frame for the presentation of some works which I was pleased to discover. Oporto-Dumbo Bridge is the successful result of research carried out by two artists from New York, Naomi Kaly and Alyssa Casey. It is an installation in the shape of a bridge. The inspiration comes from the fact that both Porto and Manhattan have their own river (Douro and Hudson) which divides the city centre of both from areas which differ from them in terms of social composition and historic culture. The Brooklyn bridge divides Manhattan from Brooklyn; the Dom Luis I bridge divides the centre of Porto from Vila Nova, the wine city/industry where the famous wine with the same name is bottled.

Oport-Dumbo Bridge is an installation in the shape of a bridge which gathers the voices of the inhabitants of the four different cities divided by the two bridges. Pulling the two rods which link the bottom lines of the installation the spectator can listen to these voices. Pulling them from right to left the voices of people from the USA can be heard; doing it in the opposite direction you can listen to ideas and comments by the inhabitants of Porto and Vila Nova.