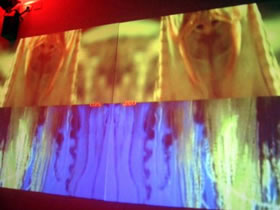 The last edition of the Share Festival 2006 has just ended, this year it had the pleasure of accompanying the acclaimed winter Olympics in Torino. Growing in notoriety, both at a national and international level, and attracting institutional interest, this time the Share Festival was held on the premises of the prestigious Accademia Albertina di Belle Arti of principal Piemontese town.

The theme of this second edition, which took place at the same time as the Para Olympic games, was the limit is surmountable, declined in all of its possible challenges and variables in reference, not only frontier experiments of the daring electronic artists but also the admirable courage of the Para Olympic athletes.

The overcoming of limits, between artist and user, between body and interface, among alphanumeric codes and symbolic or subversive contents, among copyright and free sharing, it is not by chance that it seems to be the converging point of the various declinations of the creative digital universe. This year the Share Festival had the merit of facing the topic at three hundred and sixty degrees putting the accent on thematic and questions araised by the creative use of technology, that at the various stages of its articulated history relative to the technological development.

Meetings with eminent representatives of digital culture and debates were not lacking to face the topic from different angles. Quite articulated this year the festival was divided into three major categories: Pioneers, Shifted e Onezeroworld , in which, following a chronological line, passing from a tribute to two pioneers, Nam Jun Paik , father of video art, and Le Corbusier , author of the first ever multimedia work of art, to the presentation of the most mature contemporary artists through to the audacious and less catalogable experimentations. Nor was there a lack of presentations of artistic projects that used Creative Common licence o active on the copyleft front.

Shifted, central body of the exhititing part of the Festival, was subdivided into three different thematic routes: Borderline, taken care of by Simona Lodi , particular attention given to the theme of interaction between man-machine; Radical Software, taken care of by Domenico Quaranta and dedicated to the various subversive possibilities of the use of software and Un-limited cinema addressed to the presentation of the new web-cinema re-media languages, taken care of by Luca Barbeni.

On the radical software side the faithful Molleindustria, [epidemiC], Ubermorgen.org . absolutly to be played is the McDonald’s Videogames , of the italian game factory Molleindustria , in which in the shoes of the McDonalds administrator the player is called to manage the whole multinational production line, discovering all of the imperfections and power games.

By the collective [epidemiC] , AntiMafia was presented , a refined perverse intelligent software. Anti-mafia, based on a peer-to-peer system, allows one to share actions of mediatic disturbance without needing any intervention on behalf of the user o leader who coordinates the actions. It could be fitting, shame that it is the same activism to be damaged by the human component, but above all by its own “roots”, the activity: it is a software that is “activated” and it does almost everything.

Animated by the same provocation and certainly not politically correct, is GWEI (Google Will Eat Itself) , project presented by Ubermorgen.com and made in collaboration with Alessandro Ludovico and Paolo Cirio of which DigiMag looked at in the last number in March.

In the same section, the Scream by Amy Alexander is also interesting, a little software, that when actived stays on the application bar until the machine makes us angry, at that point it can do nothing else but scream our “anxiety” .

From the area Borderline, equally ironic and enjoyable, is the little Nervous, di Bjorn Schulk, an interactive audiocinetic object sensitive to the visitor’s presence and touch. When one gets closer Nervous, equipped inside with a Theramin, one of the first electronic instruments in history, it starts to get nervous, it starts to beep and move frenetically. Very nice, also for the shape, round and furry.

Amusing, but at the same time very complex is the project by 02L- Unità zero, it is made up of actuators (springboard) that when stepped on activate, through research in the audio-video database, sound sequences and video-clips respectively reproduced by speakers and projected on to a screen. There are five springboards therefore it is possible for the visitor, or visitors, to delight themselves with their own DJ and VJ performance with their own feet and rhythm.

By Un-limited Cinema we indicate ocular.com by Jeoff Lillemon , a surreal artist that expresses himself through cinemagraphic paintings; The Collective Intelligence Project , by the Italian group Multiforma (see the article NetArt this month) , and Imagepirate, by Antonio Mendoza , a video made remixing pieces of great historical films and audio lines of great musicians.

They are projects made for the net and that reflect the statute and the expressive possibilities of the web, therefore I invite you to and visitthem at their respective websites (you will find the addresses below). The host country of the Share Festival this year: Slovenia.