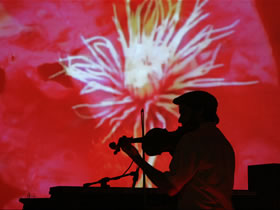 In June 2008, the first season of the Node Festival was held in Modena . It is a festival dedicated to the meeting of visual arts and music, and new technologies. In the beautiful setting of the galleria civica in Modena , lectures and international live events followed one another nonstop for two days.

The line up consisted of Marsen Jules, Nq, Alva Noto, Retina.it, AOKI takamasa, Kangding Ray, Deaf Center and Deer as for the musicians; Claudio Sinatti, Suicase.org and Nicolaj Konstantinovic, as for the video mixers.

The first evening opened with the performance of the German Martin Juhls, aka Marsen Jules, accompanied by the violins of the two Yara and Nicolaj Konstantinovic’s visuals. Martin’s performance concentrated on ambient orchestrations produced by a laptop and by the live accompaniment of the two violins. For almost an hour, the audience followed the show silently, immersed in a sound stream made of very long drones, plays on sounds created with glasses and the sound intrusions of the two Yara. A bit long and bombastic but fascinating on the whole.

With Nils Quak aka nq, the rarefied atmosphere created by the previous performance was swept away. The German musician started creating complex and sharp bits, high-level IDM. The thrilled audience remained motionless, sitting on the floor inside the hall. Pity that the location didn’t give the opportunity to go wild in time with the BPMs coming out of the radio equipment. For almost an hour, nq enjoyed creating sound plots with skilfully built bit glitches and melodies that evokes the Japanese music label that produced him some years ago, the progressive form .

After a couple of minutes of agonizing wait for the stage change, it was Alva Noto‘s turn. Using for the first time linear and colourful visuals, the live performance by the contemporary electronic music guru was made up of minimal noises, geometrical bits and two songs with lyrics in French read by Anne-James Chaton. Alva Noto didn’t disappoint the expectations with his performance and attracted the attention of his audience by presenting the national preview of his latest concept work, Unitxt, on the relation between mathematical language and musical experimentation. The audience didn’t just listen, but, eventually standing, had a good time, moving at time with the uninterrupted bits.

The Neapolitan duo retina.it took care of closing the evening, with the help of suicase.org’s visuals. It was the only Italian music project at the festival.

The day after was dedicated to Japanese musician Aoki Takamasa.

However, it started with the great live performance of the Norwegian duo Deaf Center . It was a nonstop flow of strong emotions: Erik with guitar, pedals and laptop catalysed the attention of the audience by creating deep and long melodies, accompanied by the melodic refinement of Otto Totland‘s piano. In perfect type-records style, the two Norwegians stroke the deepest side of the music soul, thanks to three long music tracks that shrouded the whole hall for an hour or so. Touching music accompanied by Claudio Sinatti’s visuals, capable of visually interpreting in an impeccable way Deaf Center ‘s musical expressions.

After them, the German musician Kangding Ray, belonging to the school of raster noton, presented as well his latest work, Automne Fold . The live show lasted for about an hour and a half and the musician played a long, manipulating his own voice right on the stage. The sonorities of this new work were very different from those of his last one: he used a much more melodic architecture and less minimal rhythms.

The wait rose more and more when the little genius of Japanese electronic, Aoki Takamasa, arrived and got in front of his laptop. His live show was continuously growing and displayed synthetic bit glitches, techno futuristic sonorities, a sound cut up. An hour and a half in which he skilfully blended pure experimentation and sentiment: his performance was the best of the evening, fascinating electronic that enchanted the audience in the house.

The German musician Deer and the Italian suicase.org took care of closing the evening and this first season of the Node festival. One hour of minimal techno, in which Martin enjoyed himself making the audience in the hall dance, by using the sequencer monome.

A good beginning for the organisers of the festival. The schedule was excellent and the festival was able to get people to know electronic, even those who had never thought about listening to this kind of musical expression.