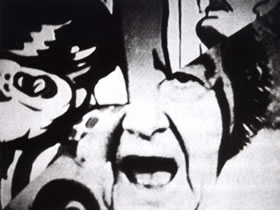 In a Barcelona that is still unwilling to flower in a longed-for spring, from 5 th to 15 th June 2008 the fourth “DiBa” festival took place; it is the festival of digital cinema in Barcelona .

The spirits animating this festival were, since its dawn, highly participatory: what is good of the digital sector is its democratic nature, the fact of being within everybody’s reach, a reason why cinema has not to be only watched any longer, but now it can be even made. And with little, as Michel Gondry teaches, the person who inspired the session of short films “Home Made”, projected in the space Movistar within the “DiBa Club” section.

In short, the wedding between creativity and technology was celebrated during an intense festival of projections, parties, concerts, competitions, interventions in many spaces of the town, under the protecting wing of giant Canon. The digital sector, however more and more present, does not still have a monopoly on cinema and for this reason Montse Martí, Alexis Borràs, Nestor Domènech e Annachiara Sechi (the conceptual and operative heart of the festival) show, every year, in the “DiBa Screen” section, the best feature films, produced with digital tools during the year.

In the festival of this year, this section was divided into five parts: Competición (where two films stood out: the impressive “PVC- 1” by Spiros Stathoupoulos, the reconstruction in one tracking shot of a news item, which took place in 2000 in Columbia and, because of its subjectivity and its real time, able to upset people deeply; the other film was “Wellness” by Jake Mahaffy, which was awarded a prize as Best Film DiBa Screen 2008), Masters del Universo (which presented documentary films about people who had particular views of cinema, for example David Lynch, Wim Wenders and Michael Moore), Arqueología del video (a tribute to the first electronic experimentations of Michelangelo Antonioni, Francis Ford Coppola and Jean-Luc Godard), Una ventana al mundo (the cinema of neorealistic denunciation, here represented by Brian de Palma, George A. Romero and Eric Nazaria), and a selection of Catalan short films.

However, apart from presenting the best productions in the world, in the digital field, DiBa is a festival that pays much attention to what will happen afterwards , to the development that the technological means already have and to the expressive chances they give.

For this reason, together with Telefónica, Apuntolapospo and Ovide, this year it devoted itself to the production of a stereoscopic music video (“Me tienes contenta” by group Pastora), the first in Spain and the second in the world that has ever been made. This video was presented during an interesting professional session together with the trailers of some of the films that will be screened in the cinemas in 2008 and 2009. As a matter of fact, also Hollywood is taking this direction and we can easily imagine that on a not too far day, all cinema and even TV will be three-dimensional and the special glasses that today we still use will not be necessary any longer. The studies that are being carried out go even further and they aim at providing an oleographic 3D instrument, which will allow people to change their points of view by shifting around the image.

Of course, now it seems to us that the real life is not “so three-dimensional”. However, this is due, on one side, to stylistic choices, which can be compared with those that make a normal photograph an interpretation of reality rather than its portrait (and that is the beauty of art!) and, on the other side, to the lack of the spectator’s perceptive ability, that which did not enable people to distinguish the first cinema images in the history or generated the general “bother” in front of the clear image of the first DVDs (now it is not commented any longer, whereas people finally consider the old image of VHS as dirty and hazy).

Another step forward of the festival regards its most important and loved section: DiBa Express, the competition concerning the creation of short films in record time, by basing oneself on a keyword. Apart from the normal conditions of participation, which have excluded, up to now, those who lived far from the town, this year the festival extended to aspirants from all over the world, thanks to the online conditions.

The broadband, PayPal, Kyte.tv and a hard work of world-wide promotion let the competition open to all the world and they promise future festivals that will be even richer. For further details on the programme of this year, which, as always, included music videos, shorts, documentary films, credits, motion graphics and so on, you can visit the website of the festival.