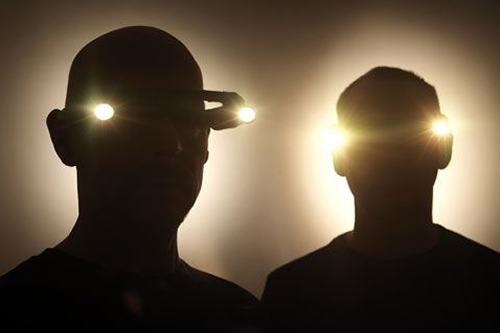 This is the beginning of a new season of night music in clubs. This means that the day music festivals have just come to an end. And peace, of course. At the least we must accept life cycles, at the most we may even learn to love them. Yet, although an elaboration and an analysis on the experience that is being lived are possible thanks to the prolonged times of the clubs, we cannot forget that the profound elaboration and the analysis of the festivals represent the explosion and the synthesis of it…

And in that sense no festival in Europe (maybe in the world?) is so important for electronic music as the Sonar in Barcelona: 16 years of continuing research, characterized by a rare ability to make some steady progress (although a wrong move may be inevitable along the way). And the 2009 edition was the umpteenth proof of that. Especially during the day (but also during the night, making the right choices and leaving oneself) the line up has as much celebrated the real classics as it has opened to real news, including different artits, remarkable and original. In fact, there were great moments of collective exaltation were . Undoubtably, we didn’t dance or listen to something “really new”

But we are in a post-modern and cultural remix age, and we cannot expect radical revolutions. Still, they will occcur in a few years (as we’re talking about cycles). Meanwhile, we can enjoy the great amount of the “current right now”, that is kicking around, as well as all the unpredictable and powerful sounds together, the instruments, the attitudes, the aesthetics, and the generations, which are typical of the present moment. And that have characterized this Sonar. As usual, the important thing is to learn to distinguish signals from ground noises. And this, especially in times in which information is overloaded. And in that sense, nothing more useful than a well-thought festival, an event that definitely cares about the audience, more than the rest A festival that gets to involve sponsors and good partners, by developing sometimes unexpected and always creative synergies, as the Red Bull Music Academy. And a festival that is effectively experiencing horizontal communication, that is in web and social media, as well as in the vertical one, as in traditional media

To understand best present and past choices, we met Georgia Taglietti, the festival’s International Communications Manager.

Giulia Baldi: Sonar is an ever evolving festival, what were the changes this year?

Georgia Taglietti: There were many changes. Among the most interesting ones, I would indicate the presence of well-known artists from very different countries, such as Syria, Congo, Ethiopia, with Omar Souleyman, Konono n1, or Mulatu Astatké and The Heliocentrics. More than that, this year Sonar Cinema has had a break, but we have created Sonar Kids, a festival addressed to the under fourteen that took place on a Sunday and lasted all day. The festival ended with a three hours dj set by Laurent Garnier and was preceded by some performances by Spanish artists, such as La Mala Rodriguez, and international artists, such as AGF and Carsten Nicolai, to introduce children to electronic music. Besides, the area was enriched with other creative laboratories dedicated to the younger children, for example with illustrator Jordi Labanda, and with the older children’s favourite activities, such as ramp skateboarding

Giulia Baldi: And what feedback did you have?

Georgia Taglietti: SonarKids had a wonderful and stimulating feedback. There was suddenly an important connection of generations: children having some fun, parents relaxing and everyone learning something new! I would even say that children also relaxed, as well as parents decidedly had fun! Garnier’s set has reached such a peak of delight that we haven’t seen since his sea sunrises at the end of the Nineties! Many of those parents were probably there ten years ago

Giulia Baldi: Speaking of the audience, Sonar is a festival representing Europe to say the least, but actually it represents all the world, and this in relation to the kind of audience that is attracted by it. How did it develop over the years

Georgia Taglietti: I think that this kind of spectators are commonly acquainted with Sonar, because they’ve been there before or rather because they’ve heard about it, that’s why they easily move among the boxes and they spontaneously interact with the town. And this allows a more and more relaxing atmosphere during the days of the festival. And besides, there’s always a great attention towards new music.

Giulia Baldi: Let’s speak about line up, instead. Sonar has always payed much attention to classics as well as to new music, it has represented the past, the present and the future of electronic avantgarde music. On the first day of this edition, on the same box, we saw for example Jon Hopkins and Tim Exile, Roland Olbeter’s show with his robotic instruments (that is an advance of future and technology), and later Konono n®1 with their Afrikan music, that is past coming back. Because indeed, we danced the same way as we danced on Jeff Mills’s rhythms. How did media react to these amalgamations? Did reactions change over the years?

Georgia Taglietti: They have developed, in the sense that they have passed from the discovery and surprise of the early years (or even rejection towards the event of the festival), to the most recent in-depth experience of the individual proposals and the great success of the less commercial proposals, or less evident at least. And there are also those who are mostly interested in undestanding the festival organization and its relationship with the town, the audience, and the media themselves.

Giulia Baldi: From the point of view of collaboration and help you have always received from the Establishments and the sponsors, how did things change?

Georgia Taglietti: The Establishment and the sponsors have always paid attention and have taken part to the event. But this year contributions inevitably diminished, for the general economic uncertainty. But the economic crisis needs not be lived as a creative and cultural crisis, because it is clear that it is not  We can learn to offer the best within the limits of what the situation itself offers, and this is everywhere and not only in a festival. A difficult moment as the crisis can contaminate creativity, but it may help find as interesting new ways as restyling, if not more. I think that the restructuring of the new Sonar (there was one room less, for instance, at Sonar by Night) was really accepted and even appreciated (Sonar by Day was in fact the most crowded in all the history of the festival)

Giulia Baldi: the collaboration with RedBull , for example, was deeper than in previous years, and the Dome, the box that hosted the new entries of the RedBull Music Academy, surely represented a success of Sonar by Day, with live concerts and dj sets by emerging artists of various nationalities such as Cecile (Italy), Debruit (France), Taras 3000 (Russia), Dorian Concept (Austria), Cardopusher (Venezuela), Culoe de Song (South Africa). An intelligent, interesting and funny turning point, and eventually free from the most traditional dynamics of the sector. What can we expect in the future from the interaction between these ‘illuminated’ realities?

Georgia Taglietti: I think that there is a natural cohesion between Sónar and the reality of RBMA. This willingness to search for new talent across the world is perhaps what joins us. We hope for a collaboration at the same level next year.

Giulia Baldi: During the day, at the Village, with the set of wizard Mills, the showcases by Ghostly International, the proposals by Huw Stephens of BBC and EdBanger Gazpashow(!), was a nonstop feast. In the Hall, among the experiences by Hopkins/Exile, the futuristic funk by Ebony Bones and the trance old/modern by Konono n1, the digital abstractions by Raster Noton, a variety of styles and energies were piled up for the next 10 editions. In the night all was someway thinning, but the great shows by Grace Jones and the Orbital, the live performances by Animal Collective , by Fever Ray, by Moderat, the dance sets by James Murphy & Pat Mahoney and the bass mash up by Rustie, the electro e techno ones by SebastiAn, Deadmau5 and Agoria, could only entertain with happiness the thousands of people there In the end, this edition was to be remembered by the audience. Now you only have to restart! What are your conclusions, then, and what are your previews for the next edition?

Georgia Taglietti: The next edition? I have no idea. Always on and always looking ahead anyway. There are various conclusions: to deepen the journey towards new bounds, since Omar Souleyman had a tremendous success for example, and to keep on with new collaborations with visionary artists close to the festival, such as Olbeter. We can already figure out the future.