Updates From The Revolt. An Interview With A Syrian Activist 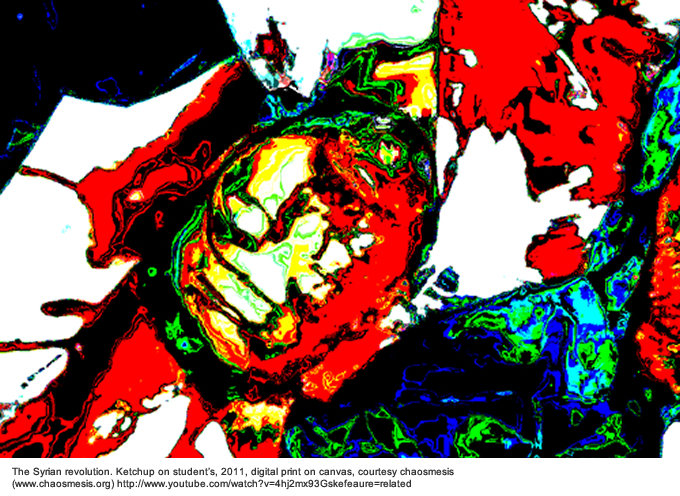 A month ago I entered Syria overland from Turkey. After a couple of week in Syria investigating, as an undercover observer, the Syrian uprising, started by then almost 6 months ago, I moved to Beirut, searching for activists working from outside the country.

Coincidentally, I got in touch with an Egyptian activist who was there for a conference and gave me the contacts of a Syrian peer present at the same event. I called him. No answers for five days. On the sixth day, I received a message with date, place and time for a meeting. I was mainly interested in the roles Syrian activists are playing outside the country, and the modes enabling the inside activists’ network to provide almost realtime information about the ongoing uprising.

I finally met him. It was sunny and pretty hot. K wore winter boots, jeans, his long hair still wet after a shower. Beard, taut skin, dark glasses. He moved hurriedly, as if in a perennial wait for an imminent ambush, or late for something, hard-pressed.

He acted aloof, almost mechanically. His fatigue was showing, probably because of his workload. He told me he had only one hour. The coffeeshop was almost empty. Beirut was waking up numb from the excesses of its nightlife, empty and torn, as much as reminiscent of its recent wars, whose stories I heard everywhere from the drunk voices of beautiful half-naked Lebanese women.

Mitra Azar: Who are you and what are you doing?

K: I’m a Syrian activist hiding in Beirut, Lebanon. Before it all started, I was already writing critically about the regime, but my main interest was and still is poetry, I consider myself a poet. Nowadays, I’m part of a network of Syrian activists outside Syria, which tries to help Syrians to spread information from within about what’s really going on inside our country. Our aim is to topple Bassar Assad’s regime in a peaceful way.

Mitra Azar: Why did you leave Syria?

K: I was under pressure. My name was listed and they were looking for me. From the beginning of the uprising, the 18th of March, in Daraa, I tried to access and spread information about what was going on. We saw that nothing transpired from the mainstream national media, therefore we decided to take charge in telling this story to prevent a second Hama [editor’s note: Syrian town, where, in February 1982, Assad’s father killed around 30,000 people in a few weeks].

Mitra Azar: How did you manage to get information and videos about the first phases of the demonstration?

K: We talked to the people in the area involved, getting information, contacting international journalists based in Damascus who then spread the news around. When we realized that they were not willing to take any information, we tried to contact the headquarters of the biggest news agencies in the Gulf and the West. During the first week of the uprising, almost 70% of the information about Syria were coming from me and a couple of friends. 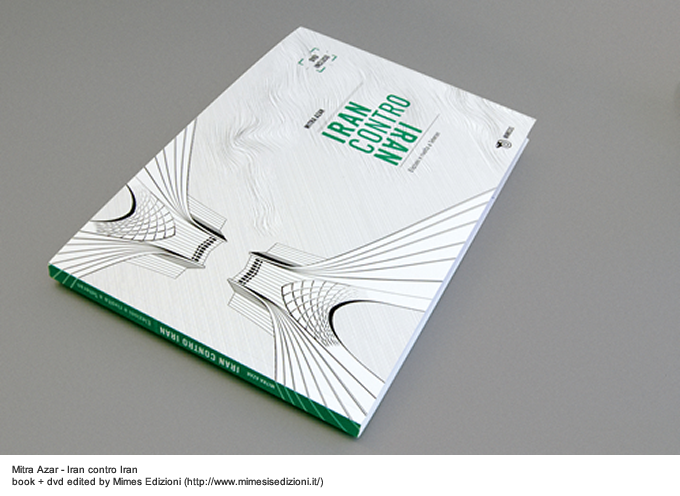 Mitra Azar: How did this network of activists grow and how big is it now?

K: The network got naturally bigger as the uprising grew all over the country. I can’t say how big it is now, but it is big enough to inform the world about what is happening inside Syria. The number of people involved in the network is changing every moment, we are suffering from the killings, the arrests, and the kidnappings by Syrian intelligence, but, day by day, we’re getting new people willing to help, so it’s really difficult to say.

Mitra Azar: I understand what you mean, also because I can’t think of it as a structured hierarchical organization, but I am rather imagining it as a flexible entity where each of the activists can work alone, as well as interact with the others. Am I wrong?

K: No, it actually works like that. You cannot call it an online army. There’s no established structure, but there are fixed tasks to achieve everyday: receiving videos, uploading them online, contacting news agencies to prove the reliability of the videos and distribute them across the media network, as well as across the Internet, where they usually appear. 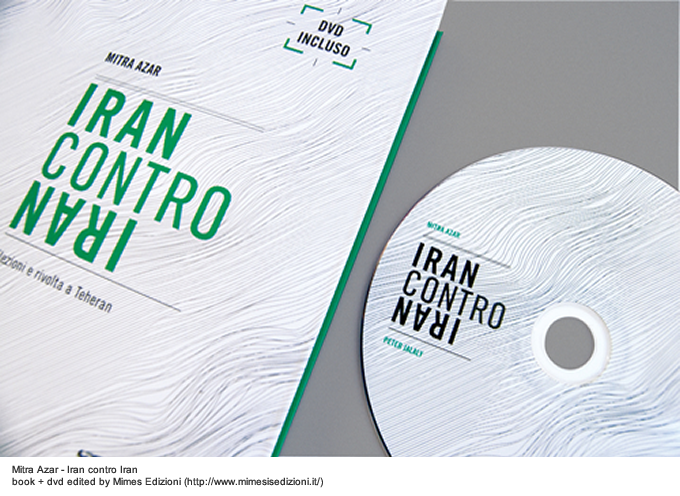 Mitra Azar: Can you explain to me, step by step, how your network is smuggling the videos out of the country? I’m asking you about this because I’m always surprised when I see real-time footage of the demos inside Syria on Al Jazeera, and I am wondering how it is possible despite the internet censorship which I experienced inside Syria – where, for example, to watch a Youtube video of 5 minutes, you need to wait hours.

K: We know beforehand where the demonstrations are going to take place. We send our people there, and we ask them to shoot the videos. To avoid casualties, we prefer them not to take these videos from inside the demonstration. Sometimes they rent a room in a building facing the place where the people will gather, sometimes we have contacts in the city willing to help our activists. Later on, some of the participants in the demonstrations are informed about the presence of our men around the area, so that they can deliver the videos they’re doing from inside the crowd.

Our network provides the devices necessary to upload the footage of the demonstrations almost in real-time. From the beginning, we found a way to introduce devices for satellite internet to enable people to upload the videos online bypassing censorship.

At this point, they can decide to either upload the videos by themselves to our Youtube channels or to send us encrypted mails with the footage. Of course, all this process takes place using proxies and software which hide the IP addresses of the machines involved. Our email addresses change from time to time, and are not attached to our real identities. At the end of each session, the computer cleans up by itself, deleting all browser history, etc… 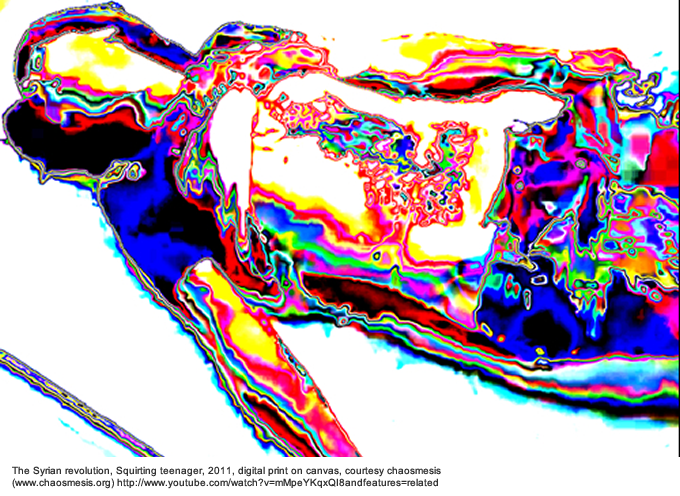 Mitra Azar: What exactly is the role of activists outside Syria?

K: We smuggle technology inside, and people outside Syria, we talk to the media, and we check the reliability of the news coming from inside. We upload videos when the activists inside don’t have the chance to do it autonomously, and decide to send them to our mailboxes. We select the most meaningful ones, and translate them, if necessary. Yesterday, I received around 125 videos.

Try to imagine the amount of work needed to verify and prepare them in form of texts for newspapers, radio, internet radio, Youtube, broadcast. In short, we try to be the physical, lively and moving interface of people inside Syria, whose movement and speaking capacity is limited by the repression of the regime. We’re their echo. The real voice is inside, we’re just letting it filter.

Mitra Azar: I’m often thinking about how the Internet is creating reality, instead of simply constituting another layer of it. Paradoxically, the Internet is working exactly on the same layer of reality and, to my eyes, the whole concept of virtuality, as something separated or additional to reality, does not describe properly the relation within virtuality and reality.

Mitra Azar: Do you think that Tunisians’ and Egyptians’ experiences of online activism has been useful to your network to avoid certain mistakes that previous activists might have made?

K: Starting from Daraa, we were already planning to have modems and phones working with satellites, just in case the regime decided to shut down the Internet and cell phones. So yes, we were ready to smooth the impact of the regime’s reaction, because we had the chance to see how Egyptian and Tunisian government reacted to the political and massive use of the Internet done by their citizens. 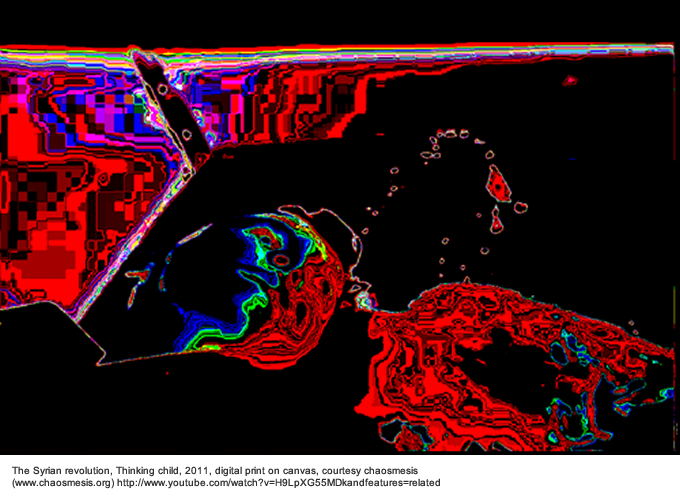 Mitra Azar: When I was in Syria and I was watching Syrian television, I had the impression that one can describe the Syrian uprising as a sort of battle between new media and old media. The activists upload videos on the Internet, while the old media run to get them in their broadcasting, either to amplify or discredit them. The impression I had is that mass media try to run after the real-time efficiency that characterizes the way new media depict reality.

SANA (Syrian Arab News Agency), for example, intercepts the videos uploaded by the activists on Youtube, and immediately sends its crew to the place where the videos are supposed to come from, to show they are not trustworthy. What do you think about the relation between old media and new media, and how are you working to prove that the videos are reliable?

K: Citizen journalism has changed the way information has been distributed until now. Now, we watch Youtube videos on CNN and BBC, because mass media have understood that they cannot reach the precision and the simultaneity that citizen journalism can in portraying the world.

Furthermore, social media work as an echo for citizen journalists, as activists can perform and deliver the whole process – from getting the news and shooting the videos, to showing them to the world without necessarily passing through the mass media.

The other important thing is how activists build up their credibility before mass media asking for proofs and information. We built it up at the beginning, verifying locations and letting foreign journalists speak to the witnesses. Verifying videos requires a huge amount of time and energy, and sometimes it doesn’t allow us to follow up on all the events occurring. Keep in mind that my impression is that, at the end of the day, activists are able to deliver around 25-30% of what is happening on the ground.

Finally, I don’t think it is a fair question to ask people under fire to be as professional as a TV crew would be. Why don’t Syrian authorities let foreign journalists inside the country and let them report on what is going on? This is a symptom that something is going on, but they don’t want to show it, right? This is more valuable than accurate numbers at the demos. Al Jazeera and Reuters fought for days about the number of people in Tahrir Square, the former saying one million people were there, the latter hundreds thousand. In any case, something big was happening.

About the relation between new and old media: I don’t think there is a sharp line between the two. They are rather fused together. But right now, I’m not in a position that allows me to analyze the matter properly, because I’m in the middle of the battle and don’t have the lucidity to do any theoretical analysis. 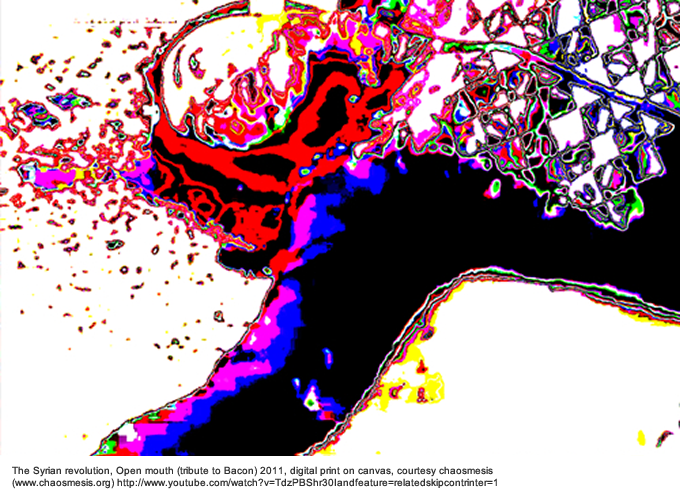 Mitra Azar: Could you share some of the main online platforms where the infos about the uprising come from?

K: Sure. I think the one following is a quite interesting list: 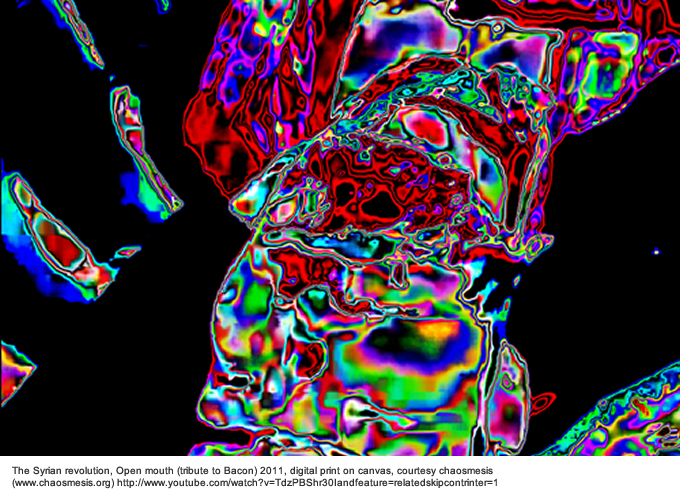 Mitra Azar: What are you fighting for, and what are your expectations after all these months? Inside the country, I heard that actually the regime is getting stronger. Do you think it is true or is it just part of their propaganda?

K: We and the majority of Syrians want to get rid of Assad and his gang. The regime is getting stronger only if, by saying that, you mean that it’s getting more cruel, brutal and violent.

K. glances at his phone for a while, scanning quickly, as in a time trap or a never-ending time gear. After less than three minutes, he leaves. He has already left some money on the table. He says to look for him online, and to excuse him if he will not answer.