The Fundació Joan Miró presents Sound Art?, an exhibition which reassesses the notion of sound in art and considers the possibility of this category. The show, sponsored by the BBVA Foundation, is set up as a journey tracing the imprint of the sound element in twentieth-century visual arts and led by curator Arnau Horta.

Sound Art? gathers seventy pieces, including paintings, sculptures, drawings, prints and installations that illustrate the ongoing, rich conversation that the visual arts have historically held with sound. The visual-sonic world of Rolf Julius (1939-2011), never before displayed in Spain, has a prominent presence in Sound Art?, coinciding with the eightieth anniversary of the German artist’s birth which pioneered the use of sound in art. 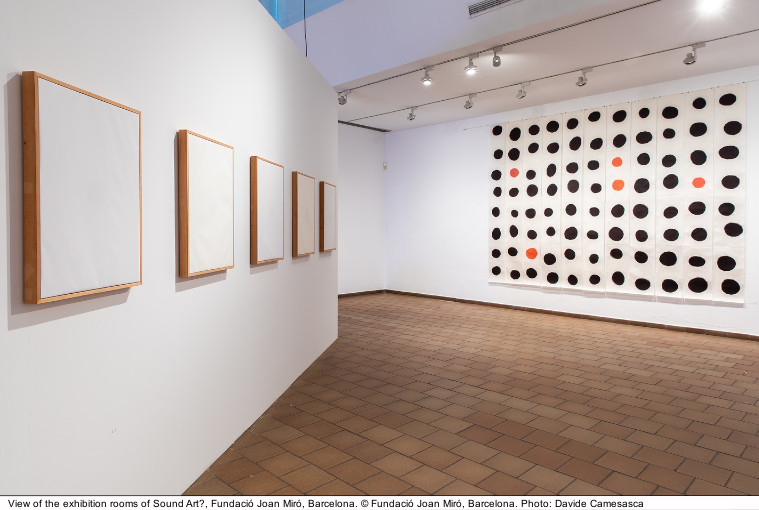 Throughout its five sections, the exhibition identifies the different ways in which sound is expressed in visual arts and offers a chronology of the sonorisation of the art object from the late nineteenth century until today. Eyes Listen, its first section, focuses on the role of music as a determining factor in the transition from figuration to abstraction.

Most of the titles of the works included refer to music, such as Nocturne: Blue and Silver – Chelsea (1871) by James Abbott McNeill Whistler, the diptych Prelude and Fugue (1908) by Mikalojus Konstantinas Ciurlionis, Bock syncopé (1928-30) by František Kupka, Sonia Delaunay’s Chanteurs de flamenco (1915-16) and Musique du crépuscule I and V (1965/1966) by Joan Miró.

In turn, the second section, titled Music on Paper, examines how the music score became a space that opened up to experimentation for artists such as Earle Brown, Cathy Berberian, Channa Horwitz, Pablo Palazuelo, Alvin Lucier and Rolf Julius.

The exhibition continues in a third space titled Sound Bodies. This area gathers a series of works proposing a sound experience aimed at the entire body as a listening space. When visitors lean their elbows on Laurie Anderson’s Handphone Table (1978), they will have a haptic perception of sounds. Next, we find Michaela Melián’s Mannheim Chair (2015-16), a seat-shaped structure for immersive listening. To round off this section, Nam June Paik’s TV Experiment (Mixed Microphones) (1969-95) invites visitors to use their voices to generate abstract shapes on a TV screen. 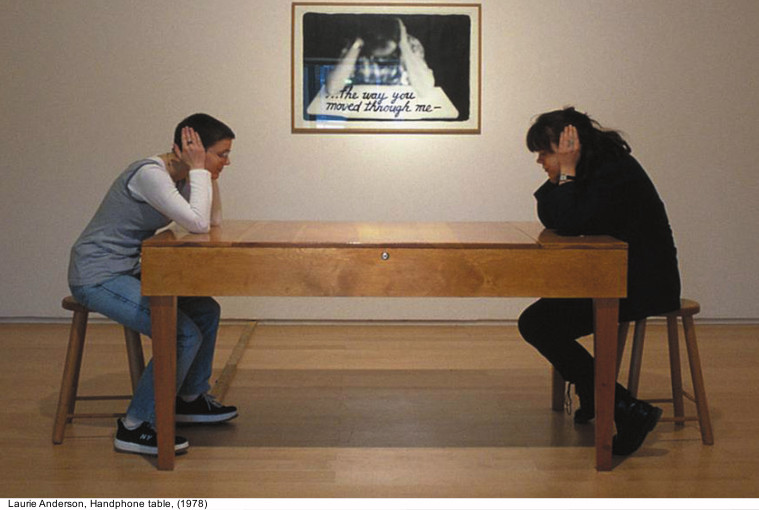 The Secret Sounds of Silence, the fourth section, explores the conceptual aspects of silence and investigates its role in the process for dematerialising a work of art. This area includes pieces such as Marcel Duchamp’s readymade À bruit secret (1916-64), the composition 4’33’’ (1952) by John Cage, The Silence (Ingmar Bergman) (1973) by Joseph Beuys and the installation The Sound of Ice Melting (1970) by Paul Kos, among others.

The fifth section of the exhibition, which lends its title to the whole, raises the closing question. The pieces in this area are sculptures, installations, and drawings produced over the past 12 years by artists from several generations. Among the works included we find John Baldessari’s first sculpture, Beethoven’s Trumpet (With Ear) Opus# (2007), musical drawings by composer and visual artist Chiyoko Szlavnics, and Carsten Nicolai’s sculpture Yes/No (2008). Whether sound is a category, a medium or a message in the visual arts, for Arnau Horta “the presence of sound (or simply the allusion to it through the title) allows the art object to state its presence, to stand out and be capable of saying in a radically different and augmented way.” 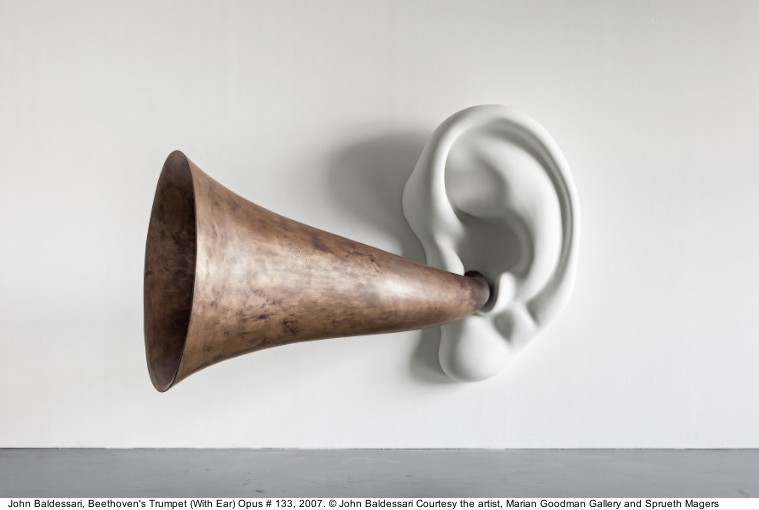 Sound Art? draws its title from the seminal article by Max Neuhaus, which is included in the publication for this exhibition along with other key essays on the subject by Suzanne Delehanty. The catalogue also gathers new contributions about the relationship between sound and art, including an essay by Jean Yves Bosseur; an article by musician and writer David Toop; an interview with Maija Julius, daughter of Rolf Julius, and Miki Yui, composer and an assistant to Julius; and a conversation with sound art curators and gallerists Ursula and René Block.