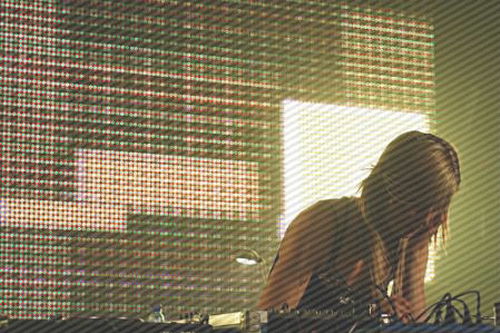 Mary Anne Hobbs is the undisputed queen of BBC Radio 1. Every Tuesday night from 2:00 to 4:00 in the morning, during her “Experimental Shows” Mary Anne proposes a selection among the best new releases, ranging from dubstep to grim, from drum&bass to hip-hop up to techno and dark dancefloor.

Over the last years her show has had guest artists as Flying Lotus, The Beastie Boys, Kode 9 & The Spacecape, Bjork, Burial, Matt Groening, Squarepusher, Skream, The Mighty Boosh, Richie Hawtin, Digital Mystiks, Ricardo Villalobos, Oris Jay, Amon Tobin, Shackleton, Skepta, Jeff Mills, Benga, LFO, Breakage, Ryuichi Sakamoto, Trentmoller, Vex’d, The Bug & Warrior Queen, Klute, Remarc, Rustie, Rhythm & Sound and has redrawn the borders of the world electronic to dance and to listen to. In January 2006 her show “Dustep Warz”, brought to light the phenomenon of dubstep at a global level, giving visibility to artists as Skream, Benga and Maia for the first time.

In 2008 “Generation Bass” was a further step in this direction: the host, by then acknowledged as the woman who had launched dubstep, invited the Dubstep Wars dj to take care of one of her programme offering a further launching pad for the artists of this kind of music and giving again more resonance to this phenomenon which in 2007 was dragged to the international stage of Sonar from the small and damp clubs in London .

Her role is not only that of radio host, but of a real guru of this genre, able to use her woman’s qualities to become ambassador of this underground scene, building up around her a real family of artists who converge onto the same stage for the third time in succession. Her showcase has been hosted by the Sonar Pub, on a Friday during Sonar de noche: her performance was followed by the eclectic Joker, the Californian Gaslamp Killer and Martyn. We interviewed her the day after that incredible show and we asked her how her cooperation with Sonar had begun.

Silvia Bianchi: This is the third time you present your showcase at Sonar. How do you think it has evolved over the last years and how do you think the scene has changed?

Mary Anne Hobbs: It is always a pleasure for me to come to the Sonar, it is like going back home. This is my third year here and I always think it is a great honor to be able to perform on this stage. The first time I was asked to play was in 2007. In that occasion I was asked to bring some representatives from the English dubstep: it was me, Oris Jay, Kode 9 & The Spaceape and Skream. When we had to step onto the stage, we were all thinking: “let see how many people we can take, it would be nice if we could gather 1000 people”. It is confirmed that that night turned out to be a real big event, it was really a big success as we were able to gather 8000 people in front of our stage. Everything went well, far beyond our expectations.

I came back on this stage last year and I tried to push my sound forward, trying to stretch it to the very limit of the dubstep and exploring other contaminations: I came here with Shackleton who lives in Berlin and whose sound is closer to the minimal techno, Flying Lotus from Los Angeles who in 2008 was really the point of reference for the West coast sound and of course we had Maia, the icon of the English dubstep, as headliner of the evening.

In 2009 we have gone farther and it is difficult to express how incredible it was to be on that stage yesterday evening: I took with me the nineteen year old Joker from Bristol, probably the best producer in the United Kingdom at the moment, The Gaslamp Killer who has come with me from Los Angeles, the most crazy and eclectic man on the whole global dubstep scene. This guy can do everything, from beat hip hop old school to rock n roll and dubstep, I do not know how he can manage to mix everything so well, but the result is incredible. And then there was Martyn who was for me the real protagonist of the evening. This man is really incredible and yesterday night he closed down the showcase in such a perfect way, with a cascade of sound rolling smoothly away …

I can say, without doubt, that Sonar is a unique situation for us to perform in front of such a peculiar audience, warm and attentive, the same who gathers here in Barcelona every year and with whom we have a very special bond: you can play whatever you want to them and they will follow you. It is a real privilege for us to be here and we do hope to come back in 2010.

Silvia Bianchi: How do you work with Sonar in choosing the artists?

Mary Anne Hobbs: It is a very exciting process that lasts 9 months, during which we work together: we start from a huge and shapeless block to arrive to a splendid sculpture. We start with a list of 50 artists and then we choose some themes. Successively we go on with a screening that enables us to select 3 artists who will step onto the stage with me. The process to develop the festival planning is very long: one of the most exciting moment of the festival for me is actually handing over the initial list, as there are a lot of artists who are not well known and it is me who present them and try to move them upwards in the selection process. The Sonar is really excellent in balancing the planning between very famous artists as Jeff Mills, Grace Jones, Moderat, etc ….and a lot of sperimental artists. Sonar is also a place where you can bet on people: I succeeded in having Sonar invite a musician as Joker even before his first record was out. He is 19 and it was a bet to have him play in front of 8000 people, but Sonar supported me in this. The festival knows how to risk, in the day programme you can really find incredible music to listen to.

Silvia Bianchi: From 2006, when you presented the “Dubstep War” show, up to now, many things have happened on the dubstep scenario and more and more different musical styles converge today in this genre that has changed into a container and in a link between California and England, don’t you think so?

Mary Anne Hobbs: Sure, at the moment there is an incredible symbiotic relation between the British dubstep and everything that is happening on the American West coast: you can even find the Scottish artists, just think at Rustie, Lucky Mi Crew, together with guys as the Flying Lotus, with the BrainFeeder’s crew and Low Thoery in Los Angeles, and with people as Code9 and Mala of Digital Mysticz.

Recently all gather together and one of the nicest thing that is happening in the post dubstep and in the post hip hop is that there are no boundaries that can block the sound in its possible evolutions : people consider every thing as a possible influence and this is a very healthy thing which helps the dubstep to grow day after day without even know yet how to name the new subgenre which is developing , but simply working on sounds and moving forward step after step like in a game. I do think it is a very good moment for the electronic scene as there is really a lot of love, community and communication among the various genres and it is very nice to see how this global and large family is growing.

Sonar gives a chance to meet to all these artists, inside and outside the festival : an artist as Flying Lotus for example come with the entire BrainFeeder’s crew to play at their show on Thursday night at the Mondo of Barceloneta and on Friday he took the entire crew to see what was happening inside the Sonar . I really like this feeling of global family who moves up together. It was incredible to have all of them here. I think that in such a moment as this, in which we are living in a truly virtual reality using the computer for most part of the day and in which a lot of artists make music with the computer using virtual softwares, it is important to remember that at the same time we remain just simple human beings every day more and more aloof by the way we move.

I think that there is really a strong desire for community and sharing that is developing in this way, in which music represents the point of union. Something as Sonar gives the possibility to exchange energies, experiences and the music that each of us has created in his/her secluded cave and to share the same emotions on the same stage.

Silvia Bianchi: I think that the coming of Internet over the last years has modified even what is your profession as a radio host. I saw that your space on the BBC1 website contains many videos, a link to your channel on You Tube and different tools to communicate with your listeners

Mary Anne Hobbs: Sure. I think that today everything is led by videos as you should always try to involve your listeners. If you see how large You Tube is and you compare it to whatever television, you understand how important and large the network is and at the same time how easy is to be part of it. You can open your own channel on You Tube and you just need half an hour: you can find me on youtube.com/maryannehobbstv but you can also find me on the bbc channel. I think that people are every day more and more interested in the Internet channels but at the same time I think that they want to have more information on who you are, and how you look: I remember that until two years ago I could simply be just a voice, it did not matter how I was, but now with this explosion of the internet, and in particularly that of the social networks over the last two years, people want to know how you look, how you dress, they want to see more about you , the request gets more and more great every day. I have realized that the Internet is really an incredible tool, that represents an instrument to promote the artists I represent. We can’t oppose technology, we have to keep up with the times and be able to answer the public needs and for this very reason it is important to be able to re-invent ourselves.