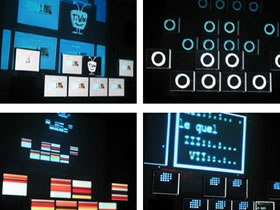 For a long time I turned whirling for gorges of the Net searching for a project able to astonish me and speed up my mind. A project able to throw the basis for a happy integration between the virtual world behind our net cable and the chaotic universe of multimedia performances.

Nowadays everyone can see how audio-video lives are sometimes walking a path opposite to the common one. A path that belongs to a society where aesthetic rules are more and more conditioned by the huge potential of technologies. Often auto-referential, sometimes incomprehensible or pure style exercise, a media live leave often disappointed even the experts. Try to figure out those who want to approach this world, by the digital matrix potentially infinite, for the first time. I’m sure that the landscape is not as fascinating as a Matrix fresco. You can almost be disappointed, most of all if you were searching for true emotions.

I was and I’m still convinced that Internet is the new emotional resource, the big agora of associations and meanings, of consciences and shared perceptions, of creativity and emotions, able to prefigure new scenes and amazing solutions for the multimedia performance of tomorrow (if we are even allowed to think at it!).

When I therefore discovered the WJ-s project, moment of multimedia performance in shape of electronic jam session , whose contents are virtually present in the big Net hard disk, and they live and they vibrate and they change every day because they’re captured by their own snowy centres, I smiled. When I saw the final result of this new born project, when I perceived the lightness of the barriers we were talking little ago, then I understood that the basis of that bridge were built. The fact is that sometime it takes so little to feel yourself into an emotional flow as big as the entire Net. It’s sufficient to see it and to hear it.

Anne Roquigny is from at least ten years manager of net art projects and creative works on the web. She worked for the French Culture Ministry (organizing an online platform with 50 projects purposely created for the web). She organized a series of meeting with netartists from all over the world called ” Tour du monde du web ” and in 2005 was a member of the Flash Festival jury at the Centre Pompidou of Paris. And she organized a round table about the history of the network performances for the festival Villette Numérique.

Mk: Would you like to tell me about WJS project, How it started, from which basic idea or personal need?

Anne Roquigny: “WJ-s” is a software and a flexible, high speed connexion public device for web performances which allow actors of the Internet, sound and image artists, netartists, bloggers, graphic designers, flashers, programmers, curators, hacktivists, newmedia theorists, pioneers and web mutants… to play live with the full scope of contents available in the wideness of the web. Working for more than ten years as a new media curator, i have always been searching for appropriate contexts, ways, devices, situations to present the works of artists exploring and experimenting the internet as a creative space.

Although I have been avoiding the boring situation where the presentation of websites is reduced to a selection of links on a few machines placed somewhere in a venue, I have often had some feelings of unsatisfaction and frustration because exhibition situations often decrease this exciting feeling you get when we are on your own, in front of your computer, in your cosy environment A web site presented outside the context of a personal browser on a small screen frequently looses some of its energy, its power because it was not meant to be shown in this situation.

Mk: In the “concept” of the project you write: “taking out the network from the web: The idea of the WJ’s project is to disrupt this tendency by offering a strong, captivating, sensual and slightly altered cybernetic surf where the feeling of being immerged in the flow and the extreme pleasure of browsing are shifted to a live performance environment” – – – – would you like to explain me deeply this idea?

Anne Roquigny: Because of the surf being many a time related to a solitary adventure and led in a very intimate relationship with one’s machine, the virtual experience is seldom successfully extended to another dimension of time-space. This is the reason why the Wjs project was developed. The Wjs device bears in mind these considerations and tries to recreate a diffusion situation where the proximity to the content, the sensation of the real time, the dynamic of the flux, the unexpected accidents are present and part of the fragile and subtle ingredients contributing to the pleasure of the surf.

Mk: Can you explain me how WJS project works? I mean, how it works technically and which kind of device you give to the artists

Anne Roquigny: WJ-S/ystem is a network of machines all connected to the internet and communicating together with the WJ-S/oftware. One of these machines, the WJ-S/tudio, is a webdeck controlled by the WJ, the web-jockey, the artist, the performer who mixes, synchronizes and dispatches different web sources on different screens simultaneously. With a very simple interface the artists handles online texts, sounds, videos, animations that come directly from the web, this giant hard disk. Internet is an exclusive space of merging and converging practices but finding your way through it is sometimes difficult because one does not have the time, the knowledge nor the keys to find his way and enjoy the experience of the surf.

The Wjs project offers a widened, shared and liberated context with complementary association of people and points of view. Artists subjectively create, for an audience, a sensitive and lively navigating situation. Wjs become some kind of « guides » helping people to explore wide unknown territories showing that there is much to see beyond google and commercial web sites The singularity of each performance is also due to the setting of the machines, the way contents and formats are put together. Wjs are given full latitude and deal with a wide range of potential scenographies, writing, forms, combinations and practices

Mk: Did you ever consider the idea to create an online platform in which performers can meet and perform tocheter with material stolen from the web. Have you ever think about this further development? Do you know some project like Placard Headphone Festival?

Anne Roquigny: I have already curated and produced network performances, online collaborative projects with artists performing simultaneously from all over the world but here its another context for the artists, the participants, the audience because they are all in the same physical space. Today the beta demo version of the wjsoftware allows one artist to play at a time but the next versions of the software will allow wjs to play together and also the audience to participate if the artistic project requires it of course.

In the near future the control of all the machines could also be done at distance from somewhere else. The wjs device is a reduced model of the internet, a metaphorical context of its codes showing the way information can flow on the network. Yes I know the Placard and they creators, I have collaborated many times with the team and Sylvie Astié, one of the creator of Placard is wjing with us !.

Mk: Can you tell me some experiences you did with WJS project? What did you undertsand from these experiences, which was your feelings?

Anne Roquigny: The project is very new and we have now experimented 3 “prototype” web experiments http://www.wj-s.org/-WJ-Sessions In Rex in Belgrade, Serbia during the Dis-patch festival, at Centre Pompidou and at Ecole Nationale Supérieure des Arts Décoratifs in Paris . Each presentation was very challenging because we had to adapt to the different venues, the new software, the bandwith, the screens and all the computers that were provided.

Each comment, each reaction from the audience, each test, bug, problem was part of the experience giving us some ideas to upgrade and optimize the system and enhance our desire to go on exploring the potential of the situation. The workshops like the one we did in Belgrade brought rich exchanges, the Serbian artists meeting the French artists was great, everybody sharing his own practice of the internet each of them selecting their best bookmarks trying to find the best ways of taking the audience on a unique tour of the internet. The next workshop and performances will take place between 17 25 march 2006 at the National Museum of Contemporary Art, Bucharest (RO) (www.mnac.ro).

Mk: From your project it seems that you consider the web performances and the wj’s more experimental, creative and real time linked than vj’s and dj’s performances. Is it true?

Anne Roquigny: Not more only different because the project allows of sorts of hybrid approaches. Works can take many forms, sometimes close to vj’s and dj’s performances but here the content is not on a local hard disk as it is inspired from processes and original actions that are related specifically to the network’s activity. The result gives birth to proteiform practices, unidentified and unexpected oddities of all sorts…

The artists (Sylvie Astiè, Jean-Baptiste Bayle, Lucille Calmel, Agnès de Cayeux, KRN, Anne Laforet Olga Kisseleva) i have so far invited for the first experiments have purposely different artistic, technical, cultural backgrounds. They all enjoy exploring and experimenting with the changing and fluctuating territories of the Internet. They subjectively articulate its intimate contours and zones. They play with the erotic and heated atmosphere of video chat rooms, with the world of artistic algorithms and computer art, mailing lists with an exacting choice of plastic, graphical, sensitive, political, social, aesthetic and narrative works they select on the realm of the web… – www.wj-s.org/-WJ-Sets

Mk: Finally, is this project an idea of you and a small number of friend and artists or there is a wide network and communities on the internet working as wj’s, draw material and sources from the web and mixing it in real time? In other words, where it’s possible to find these wj’s working, on which websites or platforms I mean, over your project of course?

Anne Roquigny: The idea is mainly a result of a personal endless questioning on how individual and collaborative online productions, in different geographical sites, can become moving collective events to which an audience is invited. The idea was born from this wish to find an appropriate tool to show and share some artistic content on many screens in a live audience situation.

The soft did not exist so i had it developed by Stephane Kyles the programmer i work with. Thanks the help of a first circle of artists, beta testers, friends, partners the project started to exist . The project is new and my wish is to have more and more artists playing with the project and to provide some better versions of the software with more options for more experimentations. We are only a few people doing but I am sure it will emulate and hopefully contaminate a wide network of enthusiastic addicts wanting to share internet content in such a way.