The Future Of Scientific News 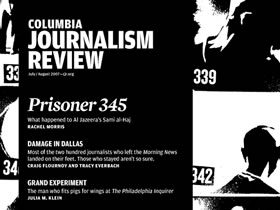 “Science Journalism’s Hope and Despair” is the fruit of a year and a half monitoring of the media and came to existence in a particularly important period for science journalism. In fact, it appeared during the conferences that were organised

(www.cjr.org/the_observatory/science_journalisms_hope_and_d.php) at short distance in February.

The first conference was organised by Woodrow Wilson Center about the theme of niche issues that are increasing online and seem to undermine the traditional newsrooms; the second one was organised by the American Museum of Natural History and was about the standard journalism rules for the climate change.

The starting point for the Woodrow Wilson Center for International Scholars in Washington was the existing crisis situation of science journalism, that is a journalism dealing with scientific topics. As expected, the congress halved into pessimists, excellently represented by some broadcasting stars, and optimist web content writers, as for example the executive director of J-Lab (http://www.j-lab.org) Jan Schaffer, successor of Pew Center for Civic Journalism.

On the one hand was the nostalgic declining set of mainstream media (newspapers, magazines, and broadcasts) and on the other hand was the thriving and multiform proliferation of science issue niche, mainly on the net. It is frequent in large debates that the most profitable stimuli came from the liminal professionals who lived both experiences and specially went through the transition from specialised broadcasting journalism to online journalism. Let’s talk about Peter Dykstra, Formerly Executive Producer of CNN’s Science: after his staff was fired in December, he announced his resignation and he is now Current Contributor to Mother Nature Network ( http://www.mnn.com/) a magazine dealing with environmental news that increases day by day the number of its readers.

Dykstra himself suggested an interpretation of the change of science journalism. First of all the mainstream media would suffer from factionalism, or that sort of sensationalism that pushes the greatest newspapers to deal with as complex themes as global warming or evolutionism in stereotyped and polarized terms. According to Dykstra, another component is that the new media provide a better measured and detailed newsworthiness than media coverage on scientific themes using inaccurate and expensive survey audience tools, although they extremely personify contents.

However a never solved controversy dealing with the media customizing is the one related to the attractiveness of web sites or niche online newspapers. That is: what how much heterogeneity must the online information produce to attract an online audience not particularly interested in it? This dynamics mustn’t be undervalued or unclassified as merely economical, as we’re dealing with scientific topics that involve a huge amount of people in the world, who don’t often realize they are directly concerned. Perhaps we will always risk a futile comparison between old and new media, if we don’t analyse the newly successful online newspapers. J-Lab is an example of this category; this headline represents a fresh form of open-source science journalism, where the new digital communication technologies are used to review science issues. According to Jan Schaffer, not only the out-of-date information mode must be moved into the new one, but an information gap must be overcompensated, new forms of dialogue through random acts of journalism, such as photos, videos and civic network evidence.

Another successful experience (even from the economic point of view) is the one lived by John Fialka, editor of ClimateWire (http://www.eenews.net/cw), that is one of E&E (Environment & Energy Publishing) most recent journals. Fialka is an experienced journalist of the old news world  he worked for The Wall Street Journal  and thanks to the web he’s making the most of success with 40.000 subscribers. A considerable success for a niche magazine. During a congress at the Woodrow Wilson Centre, Fialka encouraged the debate, emphasizing some criticism on his journal, which manages to entertain an audience with a high educational background and interested in science issues, although with a discrete success and hardly reaching a larger audience familiar with traditional news broadcasting.

The New York conference at the American Museum of Natural History was based on as a simple as deep idea: “If we leave out for a moment the political and energy implications, what did we learn about science journalism coverage? How did this journalism contribute to find a solution to climate problems? On this occasion the American Museum of Natural History registered its first official blog (http://www.amnhblogs.org/) as a means of communication by the side of a current exhibition about climate change (www.amnh.org/exhibitions/climatechange/) which will last until August 16 th . Matthew Nisbet’s speech was particularly interesting. The American University Professor and creator of Framing Science, an academic blog (http://scienceblogs.com/framing-science/) affirmed that, apart from a logical confrontation between newmakers, journalists, bloggers and the academic world can elaborate new narration styles and personal frames for climate science. This problem according to Nisbet must be a moral obligation to diffuse among all the education levels and in all the geographic areas, even the micro-local ones.

This is neither the time nor the place to discuss possible solutions to the present journalism problems  and let’s think now about science topics coverage … Up against such enthusiasm towards what Schaffer called scientific labors of love, we must consider that the problem of professionalism fund always lies in ambush. CJR dossier cites the closure of one of the most prestigious scientific section of Grand Unified Weekly di Slate V ( http://www.slatev.com ) dealing with technology and using very innovative contents and language. It was born as an experiment on November 2008 but it didn’t win the right funds to afford the more and more expensive contents, though it obtained a huge success among the audience. Dean Baquet, Washington board director for the New York (?), isn’t very confident towards the newspapers’ closure trend and he is seriously worried about democracy, because the death of independent headlines “It concentrates knowledge in the hands of those who want to influence votes. It means the lobbyist knows more about Senator [Richard] Shelby than the people of Alabama”. Perhaps we may support the same idea by using Italian subjects.

We will generalise too much if we involve democracy, but we can’t deny the science information changes we are living. It’s a space change  we are expanding the discussion  but it as also a mental and aptitude change: from the models of accuracy, independence, objectivity and specific journalism, we get to the direct evidence of Media Makers and amateurs. Moreover, as the transformation is evident through the new media and is pushed by collective consciousness towards scientific themes, the result is that science and technology have become an extraordinary change political lever that cannot leave public opinion without a reaction.