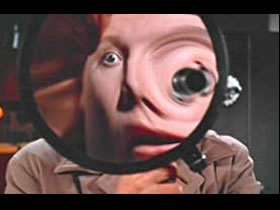 The link of all the thoughts I would like to give to you is related to the fact that the deconstruction of new media, the non-linearity of digital arts simply are coherent with a perception/concept of our contemporary reality. So, if we want to make an artistic research, if we want to make some experimentation, we must go further, we must think at them as fixed point, even if not sufficient. We must think at them as generative art concepts, as art as deconstruction, art as remix of the post-modern. A work that is interactive to a presence or that answers to the criteria of post modernity is not enough to achieve an artistic value.

Obviously it’s not enough to state some basic declarations, but we rather go beyond the boundaries. How? The same questions are typical of some expression areas similar to the new media (often overplaced), such as the post-dramatic theatre or the cinema. Here the changed conception of the world and the hybridization with technology altered shapes, contents and fruition. The intentions of those few lines are to enlarge the already shown reflections of the same areas of digital art and expressions.

The book Death 24x a Second by Laura Mulvey faces the theme of the mutated relation between spectator and cinema thanks to the new technologies. Simplifying the whole (even if I suggest searching the sources), Mulvey observes that DVD allows to stop the visual flux of the cinematographic narration and she observes how life in movies is composed by still frames. This has always been the paradox of cinema, but nowadays the spectator can easily watch the single photogram.

The individual frame, the projected film’s best-kept secret, can now be revealed, by anyone, at the simple touch of a button. Easy access to repetition, slow motion and the freeze-frame may well shift the spectator’s pleasure to a fetishistic rather than a voyeuristic investment in the cinematic object.

This observation reveals a tension of the cinema towards death (and that’s why the title): Yet, there is another, narrative aspect to the stillness/movement tension that is not specific to the cinema but has been reworked and reinvented within the constraints of mass entertainment story-telling. Mulvey detects, at the present moment, an attraction to endings, and with the threat of ‘ending’ hanging over the cinema itself, there is an extra awareness of the deathlike properties of narrative closure. Inevitably, such a conjunction shifts the attention of the psychoanalytically influenced critic away from a preoccupation with the erotic, as the propelling force of narrative, towards death.

Let’s enlarge our first reflection to the new media point of view (no matter if CD, web-sites, installations, etc). There’s no conceptual difference between a DVD and a CD. Both of them are multimedia disposals, even if with different complexity degrees. They have menus and navigation commands. They substantially allows a non-linear access to the contents, images (no matter if moving or static) and sounds (who’d like to deepen the argument could study the complexity of applications such as DVD studio PRO, developing environments that use flux diagrams, events and code for the DVD authoring).

The cinematographic narration (the dramatic narration) starts from a static situation, creates a narrative accident that will be solved going back to stasis, often represented by the explicit death of one of the protagonist, or at last going back to a situation coherent to the entropic principal (the TERMICA death). In some way, the erotic level of the image is balanced by the overcome stasis, by the return to the order. If we though take away from time its inevitable evolving value, so its beginning and its end are no more unavoidable points, even if symbolically, we deny the death itself. Movie is seen as a videoclip and can be seen as we like (and often used in a vj-set).

Denying the (dramatic?) temporal/linear evolution is common in many installations, place where the public enter and somehow interact with contents and processes. Cinema itself, inside installations, turn into a space to explore, as in “24 hours psycho” by Douglas Gordon.

The multi-channel multimedia DVD is perfect for the pornographic vision that builds on repetitions and variation of the theme its narrative scheme. Infinite repetition is a magic against the concept of inevitable end (at least for the occidentals, that have a linear concept of the history).

In a shoot’em-up videogame we can stop our match, so we’ll have different developing (players usually save the game before a particularly difficult passage, but this means narration can proceed differently). In this type of game, it is symptomatic the concept that the player dies and resurges a potentially infinite number of times.

So through the contemporary technologies the spectator-player often denies one of the basic authority of the movie director, that is making something happen. The mediatic material is therefore a plastic material, on which we can intervene.