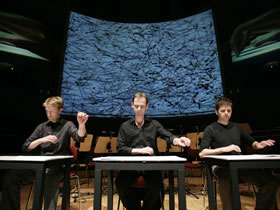 Thierry de Mey is a contemporary composer and director who works on every creation as it was his first one, with the same intensity and passion, the same commitment and humility.

He studied the piano and the percussion instruments together with cinema; these studies gave birth to videodance. Sometimes he plays the director role, sometimes the soundtrack composer…but in both cases he is unique and his collaborators are often essential and irreplaceable, such as the choreographers Anne Teresa de Keersmaeker and Wim Vandekeybus. The work Rosas danst Rosas already shows his desire to experiment and risk with the theme of classic ballet with Anne Teresa, a Flemish choreographer and director who founded in 1983 Rosas, a company made up only of women, and she made her debut with this show when she was just 19 years old.

April me, a show performed to celebrate the 20 th anniversary of the Company, is a neologism taken from a verse by the American poet Edward Estlin Cummings, and it means “make me April”. It is based on the music by Thierry, who created an original composition, including Les Noces, a piece written in 1923 by Igor Stravinsky, in a prologue and an epilogue that focus on the story theme. Then, he created some masterpieces such as What the body does remember, rich of objective and subjective elements, and Musique de Tables, that introduces a new music technique: manual percussions on a table following a score. It is an authentic concert without any instrument, where masters’ harmony and synchrony are special. And finally his last work is Ma Mère L’Oye, where the Belgian director invites dancers-choreographers to choose a fairy-tale character and to create a dance with the music by Maurice Ravel.

So, meeting Thierry is exciting; and it is even more exciting talking to him about his world, his art and his life, especially because he is a very kind and ironic man. I met him during the last edition of Riccione TTV Festival, because there was a special exhibition about his art and the Belgian art, about the contemporary dance and videos of Meg Stuart, Wim Vandekeybus, Alain Platel and Antonin de Bemels. I met Thierry in the afternoon at Riccione Tourism Palace: he was very punctual and I was feeling a little excited.

Massimiliano Schiavoni: Good afternoon Thierry, thank you for being here,can we call each other by our first names?

Massimiliano Schiavoni: Where does your surgical precision come from? When was it born?

Thierry de Mey: When I was a child I took music lessons; my sister, three years younger than me, took dance lessons. I studied mathematics and Latin in the high school, and then I attended Brussels cinema school; but I continued to play music, I played the piano and percussion instruments. I was 20 when I began the cinema school and I was interested in medicine and neurological sciences. I thought that cinema was the best means to combine all these disciplines: music, dance, movement…it’s multidisciplinary. .

Massimiliano Schiavoni: So, you began to be interested in dance thanks to your sister.

Thierry de Mey: Brussels is not a big city, but all my friends dance and play music; so these arts are familiar to me, I spent many hours studying dance and music with my sister, I met her rhythm and percussion teacher, and in the meanwhile I was attending the cinema school. Obviously we are all friends and when a video was needed, everybody called me. When she was 20, my sister Teresa performed a jazz dance show that is still performed throughout Europe, and we made a film based on this show…

Massimiliano Schiavoni: Which was your first work?

Thierry de Mey: Except the youth works, my first real work was the music of Rosas danst Rosas, a dance show with the choreography of Anne Teresa De Keersmaeker, with my sister and with the Italian Adriana Borriello.

Massimiliano Schiavoni: Your Company often works with Festival Inteatro in Polverigi; I come from Polverigi.

Thierry de Mey: Ah Polverigi.. In 1987 I’ve been there for three months, even the taxi-driver didn’t know how to get there. We performed a very important show and it was there that I invented my popular table music system: Musique de Tables. I created it together with Simone Sandroni, a guy from Ancona, and Wim Vandekeybus… It was a special residence because the theatre was still under construction, we used to rehearse in a sort of huge white balloon, it was very intensive.

Massimiliano Schiavoni: Which work did you perform at Polverigi?

Thierry de Mey: We performed Wim Vandekeybus’ first work: “What the body doesn’t remember” . We performed it there, in Holland, and then we went to New York where we were awarded the American critics’ award for its dance and music: an incredible success, all countries wanted that show. I can’t forget that the Festival Director  Cimetta  was so intelligent that he chose Wim, who wasn’t famous yet… I also remember that Musique de Tables was created because it was one of the scene of “What the body doesn’t remember”: I was alone with Wim and his collaborator. I was the musician, so I had to follow the dancer’s movements because everybody had to be independent… This scene is still performed and taught at school.

I had to find a way to make my hands movement something visible, to write it down, a score… In Polverigi-Brussels train, a two-day-long journey, I felt relieved by the fact that I could work on it, I had to do something to reproduce all this in a stave with musical notes…

I spent a lot of time on it. The performance was a baroque concert with just three simple tables and three professional percussionists; in the film there’s an orchestra conductor, a double bass player and a clarinetist. The weirdest thing was that, when I presented this work with my musicians, everybody was skeptical; whereas today it’s like my visit card, my references. There are many conservative people  in Brussels, Paris, Strasbourg, Japan  who use this percussion system: I teach and give lessons about it.

For me, it was the beginning of something. I was understanding how important movement inside music is: movement is like the music of music. The pianist has to make movements inside the notes, and I think it is really important for all those people who want to play, sing or do anything else. Obviously, in dance the movement is the purest, but it exists in every human thing; it is inside a film, everywhere, inside the actors.

Massimiliano Schiavoni: Will Musique de Tables have a future?

Thierry de Mey: Yes, Musique de Tables was the beginning of my interest in movement, but in 2002 I did other works that can be seen as a sort of sequel to it. There is an orchestra conductor who wanders through the audience and moves his hands, and the audience has to imagine the music; it is music, but silent music, and people then will say they imagined an incredible music. It’s a wonderful work, it’s not absurd. We also did another work with a musician who moves his hands and, thanks to computers and cameras, he plays music without any instrument .

Massimiliano Schiavoni: It is a work also for those who don’t know music.

Thierry de Mey: Of course, and for this reason From Inside was created…for those who don’t know so well this world. The visitor arrives in a place, in a dark room with three screens representing three cities: Frankfurt, Gibillina (Sicily), and Congo capital (Africa). Everybody can choose which labyrinth enter. The dancers represent the three civilizations and cultures: for example, they represent the dead people of Gibillina earthquake in 1968. The visitor has to follow the dancers: an Italian guy, a black guy or a white one. When a person arrives and moves his hands inside the light, he is creating music for From Inside dancers; when a person doesn’t move, the lights dance without music.

This interactive installation was presented last year at RomaEuropaFestival and I hope I can present it again this year if we find a large space. I’d like to perform it in Sicily, to make people remember their origins and plunge into Manuela Rastaldi’s choreography, who studied in Brussels at Teresa’s school.

Thierry de Mey: This collaboration began even before we became artists… You know, in Belgium there are two communities, the Flemish community and the French one, I belong to the last and she belongs to the first one. So, at school she used to translate something for me and vice versa; I used to help her with French and mathematics… We’ve been friends since we were teenagers, she’s like a sister to me and we work on the shows together.

Massimiliano Schiavoni: And what about Ma Mère l’Oye?

Thierry de Mey: This work was an amazing experience. Many dancers and choreographers came to the woods to dance and improvise this famous classic ballet based on a childish story, using the green element, nature. I was interested in working on dancers’ imagination, on their capability to express themselves, for example when they see Pinocchio in the wood, or when Rebecca Murgi plays the role of an evil witch, or when a branch with leaves becomes a backbone and finally a human body; it is a strong link with nature. We worked on it for a whole year with dancers practicing every kind of dance, and the question was: “How can we dance the contemporary dance nowadays?”.

Then, I worked on a video-installation, a “photograph” with many tools, without music, and I presented it at Venice Biennial in 2002: Deep in the wood . There will be a development of this work: we will present it for the first time in France in 2009, where we think we will follow the orchestra. Today, it is possible to edit a film live, so I can do whatever I want. Music is free and I’ll follow the dancers: in Italian it is called EchiVoci, that means voices of the same importance . Dance is as important as music, dance will accompany the orchestra.

I’d like to film something about La Vals de Ravel and a work by Luciano Berio, based on the folk Sicilian music that I love… I love that region, it has a particular intensity. I love Sicily and Piedmont too, with those paddy fields similar to the Flanders, and also Polverigi that represents an essential period of my life.

Massimiliano Schiavoni: So, are we going to meet there?

Thierry de Mey: Thank you and see you.