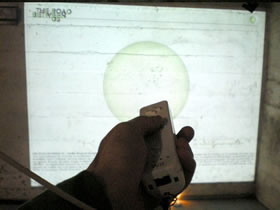 These are just some of the questions that Hacker Space Festival poses to its audience. This festival, at its first season, is an ambitious variation on Italian hackmeetings and other important European events, such as the Chaos Computer Club (CCC) Camp .

Hacker Space Festival 2008 was held from the 16th to the 22nd of June at the /tmp/lab near Paris and, since the very beginning, it has set the ambitious goal to gather people from the most varied cultural and technological backgrounds, so as to give life to a sharing network among the different experiences of different European hacklabs.

The special merit of the project was its insistence on the social and ludic dimensions of new technologies and its effort to separate the figure of the hacker not only from the stereotype of the criminal breaking illegally into computing systems, but also from that of the nerd devoted to activities on hardware and software that are an end in themselves.

As a matter of fact, if reality is more and more permeated with devices capable of altering and re-configuring the everyday actions of each individual, the organizers trace back the concept of hacking to its original meaning of “creative use of technology”, with the goal of presenting, developing and sharing, as Deleuze and Guattari would say, a wide range of cross-practices of active resistance to the present.

Not by chance, besides the traditional issues of the hacker world, such as free software dissemination, privacy protection and critics to copyright, the festival presented many speeches and workshops on the ludic approach to technology, as for example the prototype of a potato-operated hurdy-gurdy for insane musical performances
(l’Orgue à Patates by k. Rockshire  http://www.youtube.com/watch?v=79MRgbWyaqA) or the software that turns a Wii remote into a practical and handy vibromasseur.

But surprises don’t end here. The ludic approach often mixes with the political approach of control technologies détournement. The ” Consumer B Gone” (http://www.tmplab.org/2008/06/18/consumer-b-gone;
http://www.youtube.com/watch?v=dPQ6yPr4Ueg) , a tribute to the renowned TV-B-Gone, a remote control with just the switch-off button, is a viral (sent through MMS or Bluetooth) method for blocking the wheels of a shopping cart, making it unusable (within the most perfect anti-consumerism spirit), by simply reproducing the signal of a remote antenna with the bell of a common mobile phone.

As far as politics and control forms are concerned, the lecture What is terrorism?, by reporter Anne Roth
(http://annalist.noblogs.org), is interesting and representative. She proposes the controversial events of her husband Andrej Holm, arrested with the charge of involvement in terroristic organizations, because of a sequence of amazing coincidences, such as having searched the net with suspicious words or not having an email address coded with the traditional criterion name.surname@domain.

In short, the Hacker Space Festival widens and enriches the European panorama of events dedicated to the comparison and sharing of hacking practices of all kinds, in the hope of strengthening a network capable of putting in touch practices and backgrounds from every single national set-up.