Cybercultures 4: A Journey In Virtual Space 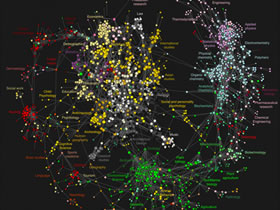 From the 13th to 15th of March Salzburg hosted the fourth edition of the multidisciplinary conference Cybercultures, academic meeting that aims at examining and exploring the diverse implications that derive from the use of information technologies in the field of interpersonal communication.

Cybercultures encourages critical exchange and debate on theoretical topics regarding the varied and numerous dimensions of the virtual world. Some of its main themes include: Cyberspace, Virtual Communities, 3D Video Games and Virtual Worlds, Interactive and Digital Art, Politics and Cyberjournalism. The conference is part of a wider project called Inter-Disciplinary.Net, an international forum, which through the organization of conferences and the publication of hard copy volumes and e-books, promotes exchange and interaction of ideas, projects and research on a series of issues related to contemporary world.

During this fourth edition of Cybercultures, in the section entitled ‘Online Communities, Web 2.0 and Emerging Practices in Social Networking’, related to interactions in cyberspace, I presented the paper ‘Hybrid Communities to Digital Art Festivals: from Online Discussions to Offline Gatherings’, which in this article I have the chance to illustrate and I would like to share with the readers of Digicult, thanks to the explicit request of director Marco Mancuso.

The aim of the paper is to give a contribution in blurring the gap between ‘virtual’ and ‘real’ communities, trying to deconstruct the rigorous and obsolete online/offline dichotomy. Although today this dichotomy still exists in some studies, since the ’90s the concept of virtual community has changed, becoming more flexible, and shifting the focus not only toward the relationships that develop exclusively online, but also toward those that take place offline in the real life.

My interest on virtual communities is part of a wider research project I started two years ago in the United Kingdom at the Centre for Tourism and Cultural Change (CTCC), in the Faculty of Arts and Society ( Leeds Metropolitan University ). The CTCC promotes critical research on the sociological, anthropological and historical aspects of tourism, in its diverse forms. In the specific my PhD thesis is an ethnographic study on the emergence of a new generation of festivals, which have appeared as a consequence of the increasing use of new technologies and media, both as artistic expressions and social connectors.

Tourism, through Digital Art Festivals, encourages the creation of new social spaces, and allows people to get together, share mutual interests, build new collaborations, and attend the performances. In this sense online communities give a critical contribution to both festivals and the digital art movement in general, by offering the opportunity for their participants to share common knowledge, and keep experimental culture alive, both online and offline.

Yet the paper traces the evolution of the concept of community, in its classical conception, thus associated to geographical space; and the concept of online community, which results liberated from social constraints and spatial proximity, mainly based on shared interests. Within the field of Critical Cyberculture Studies the concept of community that exists exclusively online has been substituted by a blend of physical and virtual components, in which the two dimensions coexist and complement each other. As a consequence Cyberspace is no more understood as an isolated social phenomenon, detached from the real world, instead it represents one of many ways through which human relations develop. In numerous studies Cyberspace has been associated with the notion of the Agora, focal point of communitarian life in the Ancient Greek Polis. The Digital or Electronic Agora represents the collective space, intangible place and core of social interactions.

The new vision of online communities has often been associated with the concept of imagined communities formulated by Benedict Anderson, in relation to the emergence and diffusion of nationalisms. According to Anderson the nation is an imagined community in the sense that members of a nation will never know or meet their fellow members, yet in the mind of each lives the image of their communion.

The concept of imagined community has frequently been transferred to Cyberspace, where relations between participants to online communities are not based on face-to-face interactions, but members of the same group hold a mental image of their affinity, which encourages attachment, and the development of a sense of belonging. Today is clear that studies of online communities should not forget to take into account the relationship between virtual and real, between online and offline elements, and how these two aspects are intrinsically related and almost undividable.

Cybercultures 4 gave to the about thirty delegates the opportunity not only to present their projects, but also offered an informal environment for the exchange of ideas and experiences, encouraging communication and debates during the three days of the event. I warmly invite those interested, for academic or professional reasons, to the thematic issues of Cyberspace, to visit the Inter-Disciplinary.Net’s website that publishes online the papers presented, and is editing an eBook that will include the sessions of Cybercultures 4, and finally offers the opportunity to join the Cyber Hub network.