Virgilio Villoresi: The Mise-en-scene Of Dreams 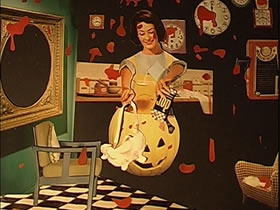 One of the most powerful characteristics of cinematographic language is to recall the imaginative mechanisms of dreams, to stimulate associations, to evoke atmospheres one can sink into, overcoming logic and letting images speak without using words.

That kind of power was well known to Surrealists, who built their allegories of the unconscious and of madness on that potential, as well as to abstract cinema’s authors, who created stories according to a shape and colour syntax. Those were examples of how the camera could extract a different reality from what was shot, a reality closer to dreams than to everyday life.That language was used to create, rather than to reproduce or record. The dreamlike tendency of the movement, which at the beginning of cinema was strong and influent, have been gradually beaten by the universally shared rules of narrative cinema Nonetheless, the tendency have survived in some film geniuses’ work, or somehow crept into video art and digital audiovideos, which have created their languages and methods according to a narration deeply linked to sound.

I believe that talking about cinema and dreams is the natural introduction to Virgilio Villoresi , an Italian artist, videomaker and vj. All his works are characterized by a cinema and dreamlike atmosphere. Virgilio has been able to mix an almost hand-made experimentation of audiovisual creation techniques and his knowledge of history, which is not simply scholarship, but the awareness of a language that was studied and learnt. What joins those elements is Virgilio’s rich imagination, his ability to make up atmospheres and express them.

Most of his videos are characterized by the stop motion technique, childhood objects and toys and a creeping sense of uneasiness which dies away in irony. Examples include Frigidaire, a video he created in cooperation with Vivì Ponti, or the video clip for Populos, a mix of two-dimension shape compositions which are arranged and disarranged to tell a story with no happy end. One of his latest works is The Rain, a videoclip created for Lou Rhodes’ voice in cooperation with Ericailcane, another Italian author whose imagination is expressed by the creation of film noir-fairytale atmospheres.

In his live sets Virgilio uses the found footage technique, which enables him to extract, cut and select short passages taken from cinema history, as it happened during his wonderful live performance with the musician Oto, for whom he created loops showing a music box of shapes, lights and colour evoking a dreamlike world.

Claudia D’Alonzo: Can you tell me something about your latest work, the videoclip The rain? How has your collaboration with Ericailcane and Lou Rhodes started?

Virgilio Villoresi: Filmmaster clip contacted Ericailcane for the videoclip…actually I was meant to work just as animation technical assistant. But during the making of the video a special synergy developed between me and that brilliant bad guy that is Leonardo (Erica il Cane). So I cooperated to the direction of the video too. We made it using stop-motion animation, with Leonardo’s puppets and sceneries and no digital effects. It’s an objective work of stop-motion technique. We also decided not to use chorma key and to reproduce everything on the set to keep the magic of the video real

Claudia D’Alonzo: And how has the project of the wonderful live performance with Oto started?

Virgilio Villoresi: Marco Puccini and I founded OTO project around 2005 in Florence. When we started it was just an audio collaboration related to glitch,idm,electronics. Then we went our separate ways for various reasons, though actually there has always been a strong creative tie between us. Now he deals with sounds and I deal with images during our live performances.

Claudia D’Alonzo: How have you “built” that live performance: is it found footage material or have you created the images? How did you create them?

Virgilio Villoresi: Mostly found footage material. There are some images that I extracted from my old stop-motion works: some of them were totally my creation, some others were created with the excellent illustrator and stylist Vivì Ponti and the most visionary ones with the brilliant designer Mateo Rivano . The found footage technique (that is to say the projection of already existing material) allows me to completely change the material for every live performance, even in just few day’s time. That is extremely stimulating for new ideas.

I believe plagiarism and found footage are very high and refined forms of art, when they are used smartly. It’s a hard work which requires keen research. Currently, for example, I am devoting myself to look for old super 8 or 16mm films that I buy at second-hand markets or on the web. You can see extraordinary images shot by amateur directors or belonging to family films… it’s very interesting to show those images (through the process of telecine and digitizing for a computer projection) and edit them so that the film you create is made of already existing images that everyone forgot without shedding a tear for them. .

Claudia D’Alonzo: I know that you have recently created peformances using lasers. Can you tell me you work with light?

Virgilio Villoresi: “Ni1”. That’s the name of the project after I bought a laser projector. Giosuè Russo and Piero Fragola are working with me. Giosuè deals with programming and together we give directions for the possible installation. It’s a very complex and interesting project with great potential.Laser is extremely ductile and its “four-dimensional” characteristic let the creation of a very engaging and emotional visual form possible.

Claudia D’Alonzo: I imagine there are authors in cinema and video history that inspire you. Which of them do you think are important for you and what are the aspects of your “video making” which have been influenced by them?

Virgilio Villoresi: Above all Norman Mclaren . He has been able to convey irony to abstract and experimental cinema, which often take things too seriously. I would like to continue the tradition of the “abstract-comedy”, which was started by Mclaren and Len Lye , by using real actors in the future.

Claudia D’Alonzo: Both your videos and your live performances seem always to tell a story, which develops through the modifying shapes. How do you create your story through images?

Virgilio Villoresi: By repeating abstract or figurative moving elements. When you repeat movements or shapes during a video or a live performance and then you show them again after some time, always in the same video or live performance, you are creating an abstract narration, you are telling a story.

Claudia D’Alonzo: If you could work with a video maker or a video artist of the past, who would you choose and what kind of video would you like to make?

Virgilio Villoresi: think with Kenneth Anger, to discover the magic that is behind the camera. Those films are visually great and have something magic in them…to find out the origins of those images, of those atmospheres, of that alchemy.