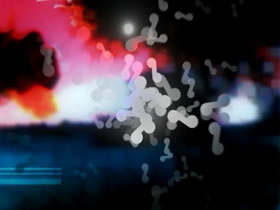 We’re all ready for Sonar 2007 . A couple of weeks ( 14th-15th-16th June ) and the Spanish weekend dedicated to the electronic music will be reality, collecting from the streets of Barcelona, from the CCCB/MACBA spaces and from the fair cathedral of Sonar by Night, a multitude of young lovers of electro sound out of control from all over the world.

Whoever has been present at least once at Sonar knows what I’m talking about, and I’m sure between Digicult readers there are many aficionados of the Catalonian first hours. The atmosphere inside Sonar is the one of the great summer events, inimitable crossroads of sounds, visions, multimedia culture, research, concerts and techno rave parties able to satisfy the taste of even different publics, but in the end united by the desire to be there, to be part of the event, in a city that during summer becomes one of the most culturally and socially attractive places of the planet.

Sonar is part of the urban material that it is part of, pro and cons, and this is surely the most interesting point. That is the way to get mixed up and distinguish as unique social event, able to attract people from every corner of the earth. Without forgetting its artistic proposal, that is getting more and more complex and heterogeneous as the editions go by, inevitably dividing public and experts that often does not understand in its deepest the density of the work in monitoring every year artists and tendencies to welcome all under the same roof.

Without going in the detail, Digicult dedicated some article to present the event as media partner and equally we will move during the next days. One of the question the Italians are probably asking themselves is: “will at least 1 Italian artist represent our country at Sonar?”. Surely some valid examples have been there during the last year, but it is clearly unquestionable that the general tendency is a scarce participation of electro Italy , for thousands of reasons that are not only related with the artistic quality of our artists.

Avoiding this way all the argumentations that we already know, I prefer this time to celebrate the classic exception that confirm the rule: the 2007 edition of the Sonar has its Italian project! It is the audio-video live of the musician Emiliano Zelada and the video artist Jonathan Pannaciò, programmed for Wednesday the 15th of June at the Sonar Complex . I had the opportunity to meet and talk with both of them, and this is the chat we had to present their live at Sonar 2007.

Marco Mancuso: You’re the only representative of Italy at Sonar 2007 and in general one of the few groups that exhibited live there. Every year it is the most asked question: who’ll get to be asked by Sonar this year? Well, just tell us how did it worked, most of all how did artists not supported by a bigger project as happened in the past (without name and surname) obtained the opportunity to participate to Sonar?

Emiliano Zelada: This is exactly what we were asking ourselves. We actually don’t know how it worked. Some time ago we presented a project to AdvancedMusic and that get everything started, for our pleasure. It is true that we fixed the rule to participate to only a few but good festival every year. We do know that there are some great festival in Italy , such as IXEM or Netmage and Dissonanze, the first two with a contest, the third with invitation. But this time has been Sonar man!

The fact not to have a support surely condition and limit us, most of all for the development of projects and the materials, enlarging the time for production. But now we’re ok with that and we give priority to what we find interesting or what we like time to time.

Marco Mancuso: In Italy you had an important passage at the last Live Ixem of Domenico Sciajino, but I think your project is pretty recent and I’m pretty sure that just a few knows you here in Italy. This is the reason why I don’t want to lose too much time and ask you to tell something about your single experience as musician and video artist, more than where did your project started.

Emilano Zelada: The last IXEM has been a great experience and we’re happy that a scene like that is part of a country where nothing happen, most of all for people like us. Our project is born at the end of 2004, even if we knew each other from long time ago. Just a little money, little works for both of us, but tons of projects in our minds. We decided to buy a studio to work on our projects separately. Emiliano composes and Jonathan paints. The influence is direct because while one is painting, he listens to the music of the other, who is surrounded by paintings. The passion for the avant-gardes and our knowledge about computers, electronic and our whish to bring the matter into another direction made us found the Mag-nesia.

Meanwhile, Emiliano published an album for the English Filament Recordings, and developed his project between art and music whit sound installations, theatre collaboration and shows. Jonathan becomes more and more painter, in solo and collective exhibitions, and he’s opening a new space in Rome . Personal experiences shape, give birth and enrich the duo projects of Mag-nesia. Moreover we were tired of going to the concerts and seeing still artists in front of some computers. Computers are important for what we do, but the idea of elaborating audio and video as material allowed us not to be static, and we’re happy about this.

Marco Mancuso: Could you describe the live you’ll present at Sonar? How did you prepared it and how do you work live?

Emilano Zelada: Our live at Sonar is a surprise! We can say we will work starting from natural elements such as the water, the heath and the different combination of physical subjects, that will be recorded by a camera and microphones on stage, trying to transform and transpose them through a digital means to obtain a different form. We didn’t want to work with prepared clips, unless they have a motive. For example we use graphic clips or sounds prepared before, but they represent a definitive passage to digital so it can be perfectly apply only in this case.

Surely it is not a vaudeville, and it doesn’t approach the theatre or something that can be danced, and that’s the reason why we like to make people understand there’s a work behind the moment they’re living, a transformation. Working with live material is our principal worry, because we think it brings an added value to the direct fruition, hic et nunc. The importance of the aura that W. Benjamin, in the era of the technical reproducibility of the art work.

Marco Mancuso: Do you have the perception of how the art and electro audio-visual communication world is evolving? Its rapidity and tendency to reciprocal influence due to the growing presence of festivals, project and work instruments?

Emiliano Zelada: We think we must know all the types of art, in all its forms and centuries. We do not exclude a thing, keeping an eye open and constant on everything about new researches and experimentations, from science to art, believing in the importance of not being influenced by particular contemporary tendencies, from machines to software, and by the facility of consuming. We’re constantly searching a built language with the use of the most different instruments. Trying to balance and know if and when come back to get the desired result. Nowadays it is simple to lose the way in impact exhibitions that do not bring a lot and decline in a while.

For example, many people believe in the absolute synchronizations of audio and video, but living free choice and decision to some software, even if programmable, it is not so appropriate. We like having free space to a personal interpretation of A/V that becomes some time unique element and some other complementary. We cross our roads looking all the sides.

Marco Mancuso: What do you expect from Sonar? What’s the evolution an artist can do, apart from the exciting moment of the live?

Emiliano Zelada: As past public of the Sonar we do know there’s always something interesting. How amazing will be to know other artists, new ideas and undertake new projects? We want this experience to be endless, we’re passing to another level. Maybe the importance of the festival is pushing on our little figures, or maybe the vision of our projects in such a wonderful frame stimulates us. First of all, we must performance at our best and demonstrate that we want to bring something new internationally. We have tons of dreams, what can happens after that we do not surely know.