Giuseppe La Spada: The Aesthetics Of A Digital World 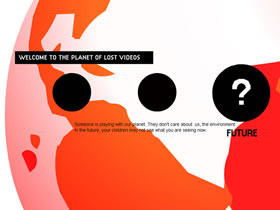 I knew Giuseppe La Spada by chance, at the wonderful performance of Ryuichi Sakamoto last year during the third edition of Festival delle Arti Contemporanee in Rovereto. In that occasion the Sicilian artist was a guest of his friend composer, with whom he carried out a net art project called “Mo No Aware”few people have heard about, which supports a green cause, aiming at drawing people’s and media’s attention to radioactive contamination Japan is experiencing in the village of Rokkasho.

I can still remember the moment when, while sitting at a table talking about electronic music and visual art, he received a telephone call that informed him he had won the prestigious Webby Awards, the well-known Web oscar , and that he had to go to New York to collect it.

For some months, I have kept on exchanging opinions with Giuseppe and after the live performance of Vjing for Fennesz at Powerstock Festival and that of Filanda Motta with the Icelander artist Ben Frost , I decided to invite him to tell us about his artistic activity on the Web, as well as his feelings about how he lived and rendered those projects that mixed music and visual together.

Giuseppe Cordaro: What has the prize you won at Webby Awards in 2007 meant for you?

Giuseppe La Spada: It allowed me to express myself more freely and to have more space available. Now I am more well-known and can negotiate more. I have proved to some people that the way I chose some years ago was the right one and if you believe in what you think or dream you will be rewarded in the end.

Giuseppe Cordaro: You are the only Italian who won a prize at Webby Awards. From your “international” point of view what do you think about Italy’s situation?

Giuseppe La Spada: Sometimes I wonder about that and the answers come from a wider social situation. Our country has wonderful artistic-cultural roots which were created in the past but have now been lost if we consider technological expression and, more generally, the widespread lack of sesitiveness. The other countries care more about artists, as well as the so-called multimedia creator.

Giuseppe Cordaro: Can you explain the project you presented?

Giuseppe La Spada: “Mo No Aware” is divided into 3 narrative parts which are expressed through the media that allow me to express myself best: flash, an experimental interface and videos on the web. I have used metaphors and expressed fears; it’s my point of view about a tainted world. The first part is based on the concept of contamination, on how we should face our responsibilities and accept the consequences of our actions, whether they are good or bad. Trying to describe the second part, after some time, I would say it used technology to support communication in a brilliant way, applying simple elements and productions to entertain and amaze the user. A microphone substitutes the mouse and the words which multiply on the screen are a metaphor for the medium of “pass-parole” and its power of spreading information. In the third part the user can play with a planet which is shown in three different moments. What I wanted was to make the user aware that actions are irreversible. I liked to imagine someone playing with the planet exactly as it were a videogame, caring for nothing but their interests. The difference in real life is the losers are our children and us.

Giuseppe Cordaro: “Mo No Aware” is the result of your cooperation with the Japanese musician Ryuichi Sakamoto. What has the relation-ship with a well-known artist meant for you?

Giuseppe La Spada: I realized I could learn from silences too. Experiencing something that is wider than yourself, makes you overcome your limits, which is formative both professionally and personally. I adore Ryuichi’s music and his artistic approach. It is a special honour for me, something diffult to describe because it doesn’t belongs to the professional side only.

Giuseppe Cordaro: Where did your passion for visual art start, I mean, your interest in experimental electronic music?

Giuseppe La Spada: I believe there is a very deep connection between sound and image; I think they are complementary, like a man and a woman waiting for each other without knowing it. Kandinsky said that taking a deeper look into an art meant reaching its limit, while comparing it with othr arts meant finding their identical inner tension. It starts from my desire to do what makes me feel multifaceted emotions. I have always loved the concept of synesthesia.

Giuseppe Cordaro: One of the most interesting projects of your career as a visual artist is your cooperation with the Austrian musician Christian Fennesz, who is a reference point for contemporary electronic music. Can you tell us something about your artistic experience with him?

Giuseppe La Spada: The emotional strength Christian generates with his work is well-known. It is always difficult to try and turn an artist’s music into images, it is a responsibility, a burden you have to bear when you are going to deal with something very personal. I remember some comments from the audience: they thought the video had been prepared in advance because there was perfect chemistry in certain moments. It was moving.

Giuseppe Cordaro: You have recently collaborated with the Australian musician (who is now living in Iceland) Ben Frost, with whom you performend at the wonderful ex Filanda Motta in Treviso….

Giuseppe La Spada: It was a very peculiar experience, both for its starting and the intensity of its preparation. Ben is very cooperative; we shot something the day before and the mood among all the people involved in the project possible was great. The performance was a very good mix between the two aspects, I didn’t know what he was playing while I was shooting and it caught me unprepared in the end. The audience’s response was extremely positive; they thought we had rehearsed and that made me happy. The most important aspect when you perform music and visual together is not to make the audience realize any disarrangement.

Giuseppe Cordaro: What do you think of the connection between visual art and musical experimentation after all the important and fruitful artistic experiences you had? How do you believe this artistic expression can develop?

Giuseppe La Spada: Every expression is influenced by the time it is in and influences its feelings. I think the concept of contamination will involve more and more artists. The research for new ways of synchronizing visually with new sounds will be digital artists’ challenge. According to my personal view it is the music and the artist who creates that lead the performance. My works are visual backgrounds that highlights certain feelings; I hope they emphasize and not cover them. Some visual works can be almost violent, the interpretations they offer can become too obtrusive when they are not perfectly pertinent. For me it’s the same interaction I have on th web: what I would like is the audience to follow an emotional way more personally.

Giuseppe Cordaro: Many people believe you are a complete artist, who deals with web, design, graphics and photography at the same time. What is your favourite activity among them?