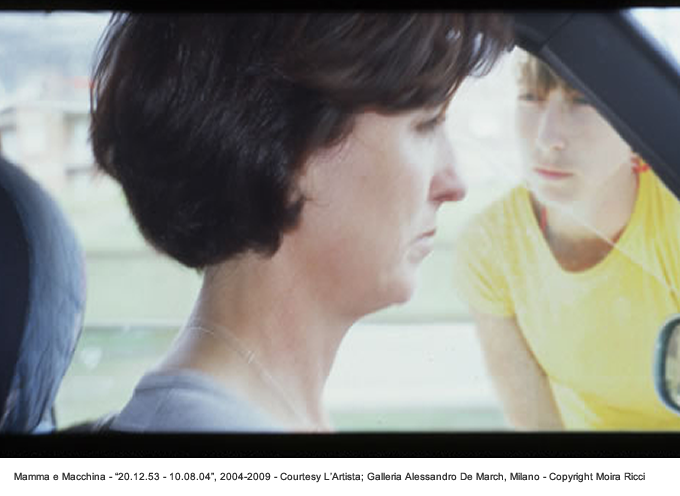 “The greeks often confronted death in a shy way. Whatever they had in front of them was in their past. That is how I have lived my life, not retracing my own life but the life of a person that I had loved.” (1). This is how Roland Barthes describes in La camera chiara the moment of his mothers death, who, looking through the pictures of his mother throughout the years, tries to meet her again, to find her in some way. This is how Moira Ricci proceeded, she later confirmed that she had been inspired by Barthes, which is obvious in her most famous project called 20,12,53-10,08,04 (2) produced after her mother’s sudden death.

If Barthe’s pain seems to be helpful for scientific experiments and seems to feed our “ontological desire”, Moira’s intead is emotional, exagerated and almost obsessive, “I kept looking at her pictures, i couldn’t stop. All i wanted to do was to be inside of one of them and be with her”.

That’s exactly what she did. With the help of software used for retouching and editing pictures, the young Tuscan artist was able to “get in” numerous pictures with her mother, perfectly inserting herself in the backround and in the scenary, adapting her hair and clothes to the contexts of the pictures. The only “error” in the pictures remains Moira’s facial expressions, the only “hint” that gives it away. She never looks toward the camera, it’s the act of pain and love for her mother, but also the only trace of the elimination of the Reference, of the Index, of those “It existed”, that for 30 years has been discussed, arguing about the ostensivity that photographical images would have had -before the invention of digital pictures. 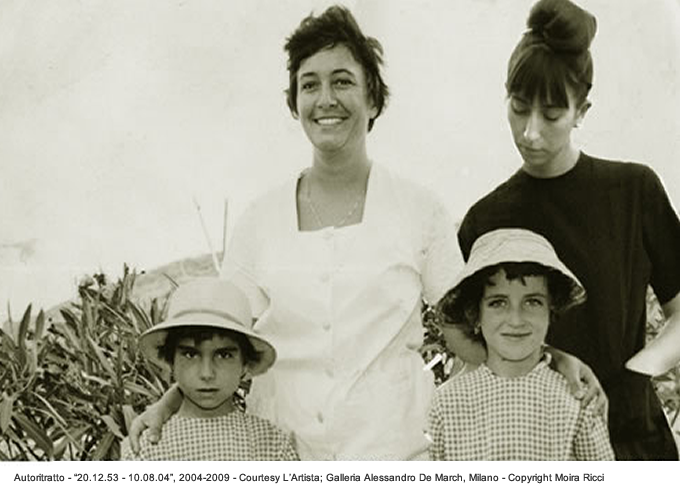 If in 20,12,53-10,08,04 the images are a union of virtual and reality, then in the presentation of Da Buio a Buio (From dark to dark) Moira tells old legends and stories through a series of pictures and documents that she herself created. The death of reality. However Moira does nothing but represent her reality, her imagination, her memories, old fairytales that are a mix of real and make believe.

Reconstructing and putting to act an inquiry made up of visible and tangible proof, Moira makes a short circuit, in which make up documents become the audiences visible doubt. The attention settles itself on the images that balance between curiousity and misplacement, without a fingerhold in a setting that tricks and seduces at the same time. The digital techniques hidden and invisible, become the instruments behind the exploration of reality that struggles and that can not be catched.

I met Moira Ricci on a cold afternoon in January in the city library in Bologna. The interview that follows is the summary of our long conversation about art, images and memories.

Giulia Simi: All of your work is strongly marked by your presence. Even when you are not visible in the pictures, your presence guides us throughout the fragments of your memories, your hometown, your relationships. An autobiography that’s still taking shape.

Moira Ricci: Yes, all of my work is autobiographic because my life is the only thing that i truly know and that I want to share and analyse. Like i’ve said before in other interviews, when i work a lot it’s because there’s something that torments me, that in some way i have to stop. Only after having transformed my experience in to something tangible , I’m able to move on. In some cases it was harder to move on and let go, for example when I moved away from home or when my mother died.

When I left home I had to do 3 projects: Loc Collecchio, 26: Faccio un giro e torno and Custodia Domestica. For my mother’s death i worked on 20,12,53-10,08,04 and on the video called Ora sento la musica chiudo gli occhi sono ritmo in un lampo fa presa nel mio cuore . 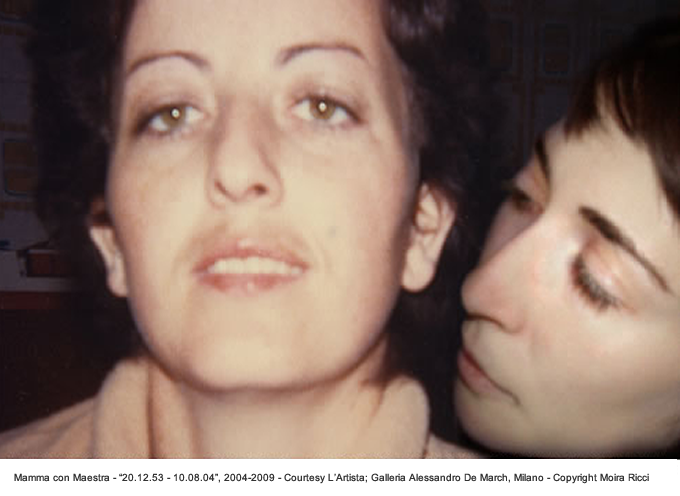 Giulia Simi: Your mother’s death forced you to take a break and after the break you worked on the creation of various photograph shoots dedicated to her in which it looks like you were able to insert Barthes “punctum” adding a sort of wound to your work. Can you tell us how it all came together?

Moira Ricci: From the start, at the funeral, i felt the need to see my mother alive, her smile, her face. I kept looking at pictures of her and I couldn’t stop. All i wanted to do was be inside. Everything seemed so unreal, time dilated, i felt like i had been there for days when only one day had passed. I didn’t plan anything out i just turned my feelings in to a work of art. She seemed to be alive in the pictures and all i wanted was to be tehre with her, at a certain point it seemed easier to get in the picture with my mother rather then to accept she was gone.

Giulia Simi: Why did you decide to use the digital inlay technique rather than more traditional ones that you have used on previous projects?

Moira Ricci: I couldn’t get the same effect using a collage, i needed to feel as if the illusion of being there was real.

Giulia Simi: In all of the pictures the connection between you and your mother is all in the way you look at her, as if looking at her would bring her back to you. So we can say that your will was to fake being there to be able to look at her?

Moira Ricci: A few days after her funeral I started putting this longing to look at her in to act. I edited these pictures cutting and pasting my image beside hers waiting for her to turn towards me in the picture so that i could tell her that in a few years she was going to die. So i started to dress myself as she was dressed in her pictures so that i could fit in with the backround. All i wanted to do was be able to tell her about the accident she would have been in and if i wasn’t able to do that at least I would of stayed there with her forever. 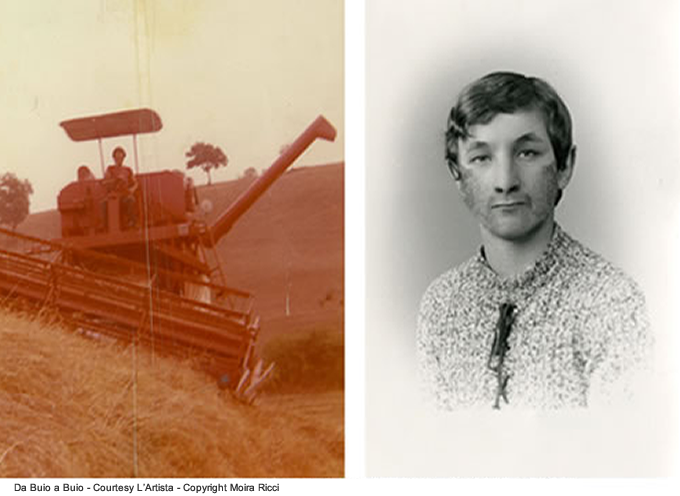 Giulia Simi: In your last project Da buio a buio, the digital techniques help you to create fake documents and fake historical events, why this choice? What is your relationship with these “archives”

Moira Ricci: I have a lot of pictures and videos because my mother always had a camera in her hands or brought a videocamera to every dinnerparty, holiday or trip we were on. Not only, I’ve always looked for pictures, even of people i didn’t know, and articles in magazines that I liked. In “From Dark to Dark” i used both my old pictures as well as other peoples. I wanted to tell stories, that had been told to me when i was little, make them visible, stories I had believed to be real for so many years.

I wanted to give the audience a surreal sensation and make them doubt wether those images were real or fake, or wether or not the stories were real or fake. There was nothing better to use then the old pictures found throughout the years. The digital techniques and the old printing tricks did the rest. 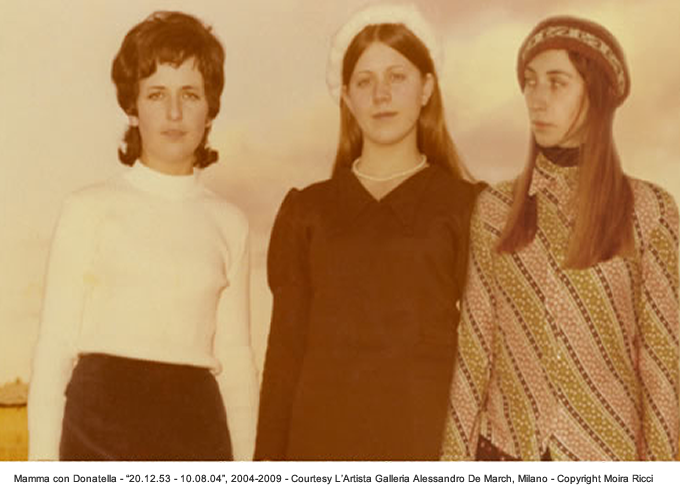