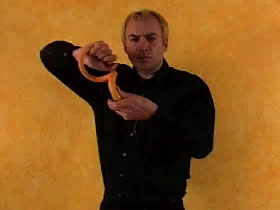 LEMUR, i.e. League of Electronic Musical Urban Robots . A group of artists based in Brooklyn who design and make up musical robots, a synthesis of musical instruments and technology applied to interactivity and robotics. With their robots, LEMUR members are contributing to redefine the shape of performances by creating a completely new kind of performer.

Those robotic devices  a group of more than 50 “members”- can both perform alone or together with human performers, thus moving forward the borders of applied robotics and art. Examples of those robots are GuitarBot , a stringed instrument , ModBot and its percussions, the fascinating ForestBot with its bells fixed to long sticks, TibetBot , a device inspired by the contemplative sounds of Buddhist monks and the complex Lemurtron , which combines robots, video interfaces and interaction.

Those were some of the topics we discussed with Eric Singer, the talented founder of LEMUR (and of another artist colective, the Madagascar Institute) . Eric is a musician, artist, engineer, programmer and untiring creator of instruments and musical applications.

Monica Ponzini: You have a pretty interesting background, you studied music and computer science How did you decide to create and develop such kind of robots?

Eric Singer: Sort of a natural combination of my interests. For many years before I started this project, I was doing other kind of electronic instruments to be played by humans. I created synthetic sound and then, at a certain point, I thought it might be interesting to kind of reverse that, have the information come the other direction, out of the computer and play actual physical sounds, that led to robotic musical instruments.

Monica Ponzini: People may have asked you: “Why robots”? Isn’t music also about feelings?

Eric Singer: Well, they are really just machines, they don’t play by themselves unless a human tells them what to do.

Monica Ponzini: But isn’t the human element missing in this process?

Eric Singer: Not necessarily, we’re not bypassing performers. We’re adding a new kind of performer to the mix- a robotic performer. Some might say they do things better than humans, or worse than humans, but to me this is not the point, the point is that they do things differently, it’s a new way of playing music, a new way of composing, a new way of performing and it’s a process that involves other artists, other performers, composers, designers, engineers and other people. So humans are definitely not missing in this from this mix. One thing that robotic instruments can do, that humans can’t, is play in a museum for 3 months. I mean: humans can do that, but would be hard to find somebody that would on an ongoing basis. They can respond in complex ways to the way humans play, you can analyze human performances and extend them to robotic instruments  there’s a lot of new territory they allow you to explore.

Monica Ponzini: At what point are you in this exploration?

Eric Singer: (Laughs) I think we are at the point we’re at. We’re not at the beginning, middle or end. I guess we’re somewhere in the middle. I think it’s better answered saying what we have done and what we want to do. We have done installations in museums, we’ve done interactive installations where participants come in a help generate the music by means of interaction, whether is video interacting, or sensors, or things like that. We have done installations that are stand alone, where music just play back on these live, physical, acoustic instruments, we have done performances or pieces that are robotic only, we’ve done that were composed for the robots to play along with other musicians. So, we have covered a lot of ground, a lot of different areas, that was one of the things that I wanted to do since the beginning. Other things that we want to do are: we want to create a lot more music for the ensemble, especially music involving live human per formers playing along with the ensemble. We are starting to invite and commission other people to come in and work for them and compose for them.

We’re planning to start a series sometime in the fall called “Resident”, which will invite people to apply and, when selected, they will be able to come in for a month and use the robots and the other kind of electronic instruments that we have and create performances and at the end of that month there will be a show where they showcase their material. And we want to create a whole array of other instruments, with different tonalities and different playing methods.

Monica Ponzini: You’ve created lots of single robots as well as a complex system as Lemurtron. Can you talk about it? Where did the inspiration come from and did you develop it?

Eric Singer: That’s our umbrella installation, to kind of integrating pretty much everything that we did. The robotic instruments are arrayed around the space, a lot of the hung from the ceiling, a lot of them around the perimeter; at the center of the space, on the floor there’s a video projection, and that’s done by bouncing a projection off of a mirror that reflects it on the floor, so we can project whatever kind of video and therefore whatever kind of generated video interface we want on the floor; overlaid on top of the video is a video tracking mechanism, so there’s a camera looking at the video on the floor; the camera’s picking up only infrared light and we basically flood the scene with infrared light which reflects off people that walk though the video and walk over the video, that way the camera can see the people, but is not interfered with by the video projection.

The idea came from talks with other artist, I’ve done video tracking software for a long time, I created an early video tracking plug-in to a program called Max, that allowed people to track video and movements in a video image and convert them into sound, and now that’s a product called Cyclops.

This system uses more sophisticated tracking methods and a program called Jitter. What this allows us to do is put any kind of video interface on the floor, have people walk through it, interact with it. One of the first ones we’ve done is like a game spinner, but you can kick it virtually. The computer that’s generating the spinner is also watching for movement, when someone moves in the direction of pushing this arrow, it will spin, the spinning of the arrow will then generate a musical sequence played back by the robots. That’s one example of what you can do, there are many other things that we wanna do: we want to allow people to play virtual billiards, virtual balls, kick them around this video area so it’s a video interaction space and it’s also an interface into playing the robots.

In addition to that, we have a network interface that will allow people to log on and take control of a video camera, move that around the room and view various robots and the upload files to play the robots back; so we’ll have a specification published and composers can log on and by uploading files they can play the robots and hear the results back live through streaming, so a lot of people around the world can play the bots. And also probably we’ll have an interface where you and interact with them and play them, so if you’re not a composer and you just want to see what they sound like and play some musical games on them, you can do that as well. That’s a sort of on-going development, we’ve done various versions of that at various times, at some point we hope to get funding to do that as a permanent installation here.

Monica Ponzini: Besides this project, do you have any other plans for the future?

Eric Singer: LEMUR is my plan for the future, continue to create the kinds of instruments that I and other member of the group want to create, show them around the world as much as possible. We also do art and technology education, so we want to continue that, we want to bring other people into stage performances, also have the space open as a gallery, it’s really just keep doing what we’re doing on a grander and grander scale.

Monica Ponzini: Do you have an international network?

Eric Singer: We’ve done gigs around the world for years, we’ve traveled with robots, we’re receiving invites every week to various festivals. It gets a bit of money to get the robot oversees, but we hope to do that more and more

Monica Ponzini: Where did you find more interest for what you do?

Eric Singer: I can’t say there’s any one place that there’s more interest we’ve had. We’ve been in Asia, Australia , Eastern and Western Europe  We’ve not been in Russia , Africa, the Middle East or South America  These are all territories to “conquer”.

Monica Ponzini: In your opinion, what’s the future of interaction between humans and machines, especially from a creative/aesthetic point of view?

Eric Singer: I don’t think anyone can say what the future is

Monica Ponzini: But how do you immagine it?

Eric Singer: More and more pervasive interaction. For better or for worse computers, data collection, is going on everywhere  I read an article once, someone talking about pervasive computers, and had been saying that someday there would be computers in doorknobs, then, as he was going in his hotel room, swiping his card, he realized that there already are- Artistic interaction with computers is exploding now the means to do it is getting easier, less expensive, the tools are getting better and easier to use, so more people are able to do it you don’t need a degree in electrical engineering even though it helps-, but we’re teaching people how to work with microprocessors and program, and create interactive art, video, sound, music. All I can say about it is: it’s gonna keep going and becoming more pervasive.