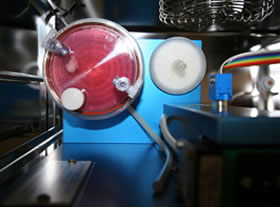 From 8th to 11th November Prague has been protagonist of the third edition of the international festival Enter3, dedicated to the relationship between art, science and new technologies, with a series of expositions, performances, panels, workshops and the Mutamorphosis symposium, meeting and exchange point between students, artists, scientists from all over the world.

The title itself, enter, means and suggests the point of view through which the different themes are coped with. Enter can be the keyboard button, used to start an application, to head on with a work, to begin a new process, as well as the trigger of a potentially destructive command.This double path is find in expositive proposals of artists and inside speakers themes, so numerous that we will not be able to explain each input (among all Roy Ascott, Victoria Vesna and James Gimzewski, Albert-Laslò Barbabàsi), but rather follow a partial trajectory through some suggestive proposal that will rotate around fundamental questions. How are art science and new technologies related? Which are areas where this interrelation can grow? Which is artist and scientist role in this exploration, but most of all how does the collaboration in “sci-art”, thanks to new technologies, modify actors roles of this metamorphosis?

Everywhere, technology importance is underlined by the role of mediation between research and creativity and the artist is seen as the guide that discover those unknown spaces and as the person that better knows the process of creation with a consciousness of the society.

During the Mutamorphosis symposium speakers followed a trail, clear in Louis Bec speech, in its declination of “extremofilia” meaning. Hot theme of last period is extreme realities, examined by numerous research centers and sector publications, first of all Leonardo magazine, that co-organized the event,

As Bec underlines, extreme territories are both the unexplored space as well as areas where men live in “impossible” conditions, so all the zones where men experience different realities and live the relation with new technologies as something extremely necessary to face the averse conditions or even as indispensable instrument to access those conditions.

The universe, the endless space, the infinitely little, the nano-world, the territories of danger and conflict, the surrounding environment, the artificial and human identity, the post-human are some of the principle themes. In these scientific and artistic activities the relation between art, science and new technologies is no more a surplus, but a fundamental and essential condition that would not let any kind of exploration and reflection going on if absent.

Around those arguments there’s a nucleus of activities and research that are proved during Mutamorphosis conference and the expositions in Prague, one above all the Unsafe Distance exhibition, managed by Pavel Sedlák, that presents about twentyworks and international research, where artists and scientists worked together.

The awaited and disconcerting work by Stelarc, Australian artist that presented one of his extreme experimentations about integration between technologic elements in body with “extra ear: ear on arm” project, is the clear and excessive example of body as post-human privileged location of exploration. Stelarc force the human limits, he trespass them thanks to new technologies, experimenting on himself the powerfulness and ability to amplification in terms of consciousness.

Experimentation in some research laboratory made by some artists aim to biological, organic and environmental aspects of the research, as in Shawn Bailey and Jennifer Willet installation, who documents the evolution of a teratoma with the “Bioteknica: teratologies”, or in “Martian Rose” by c-lab (Howard Bolan and Laura Cinti) where a rose is closed in an environment similar to the Martian one. Sometime the artist make the spectator in front of danger situations, typical of the conflict.

Repeatedly works that recreates atmosphere using military footage are found (“The all seeing eye I.+II.” by Radim Lauda, “whatever you say  say nothing! II .” by Luká Machalick, “Safe Distance” by kuda.org) or installations with counters activated by the passage, simulating the countdown, as in “Light Insecurity” by Pavel Kopriva, or in “Sounds from Dangerous Places” by Peter Cusack, where sonorities remember the conflict zones ones.

A key element in knowledge and comprehension of artistic practices that consider the interdependence between art, science and technologies is the overtaking of boundaries, not only physical and spatial, but also sensorial and cognitive. The passage from a body and human consciousness to a post-human consciousness is realized also through a better attention to senses.

If sight has been privileged in human history, following the red wire traced by Mutamorphosis interventions and festival expositions, it is evident the movement of artists and cultural environment to less explored senses, such as hearing and touch

Paul describes Midas as a double phase research. First sound, then visual that result into an interactive A/V installation, where hearing and touch are directly involved to understand the work. The project focuses space between elements: skin and gold, analyzing what happens between cells in the moment of the contact at nano-metric level. Exploration is possible thanks to the atomic microscope, technologic disposal that catch the vibrations on cells surface and between them. The collected data have been analyzed and transformed into sound files as principle resource to realize the installation, and secondly in a projection of visible data.

Midas tries to turn the infinitely little into something audible and palpable. The final installation can be used in a closed space where there’s a support that hold a gold table. The spectator can approach it and touch its surface. The meeting of skin and gold activate the sound projection of the vibrations that the two elements create. The visual projection is a digital image of a single cell interested by a genetic algorithm based on the collected data, a visual of the transformations that happen at nano-metric level at every single graze.

Paul Thomas realized this work continuing his artistic practice. He always cared about the exploration of the spatiality project and the relation between body, space and architectural structures. In Midas, he reduced the scale of this exploration, focusing the attention on vision, on consciousness and restrictions of prospective at nano-level. He underlines that his research is an attempt to develop new modalities to understand and be in the world.

During the Mutamorphosis conference, Paul Thomas held a lecture titled “Boundaryless nanomorphologies” through which he illustrated some key themes of its artistic soul. Talking about this, he underlined the intention to transmit through art the meaning of the meeting with nanotechnology. This new discipline united to biotechnology changed and will change the modalities to conceive reality. Nano-metric processes are amazing, as well as terrifying, because they reveal revolutionary and powerful abilities and properties of the matter.

They change our idea of the world, they show how much our senses are limited in the knowledge of new territories. Thanks to new technologies and to a new interpretation of our senses, touch above all, key element of perceptions, we can ask ourselves how to mentally interpret these processes.

Sight is the prince instrument through which man explores world. But, exploring new unknown worlds, the infinitely huge space or the infinitely little of quant, it uses a new sight, possible only through technique. New technologies give back something that allows the access to new worlds that would be humanly and naturally inaccessible.

To face this important theme Roger Malina is relevant, spatial scientist and American astronomer, as well as son of Frank J Malina, founder of Leonardo magazine, who dedicated in Prague an intimate retrospective during the festival.

In Malina “Limits of Cognition: Artists in the Dark Universe” the scientist experience in searching the unknown realizes when human nature and its senses are insufficient to explore and understand the expanded reality of the universe. That’s the reason why science and technology work together building disposals that allow the humanity to get closer to what is humanly off limits. Malina evidences the necessity of a new “sensuality” and says: “As scientists keep on extending perception and soul limits in these new extreme areas, artists have the important role to shape the future science”. Therefore the artist role is situated in a central position, creating new metaphors that allow humanity to access new cultures.

Enter3 and Mutamorphosis – as the director Pavel Smetana himself underline- are attentive to the social and political sphere, to the contemporary history, as they ask questions about scientists and artists role in all the collective ambits.

The reference frame those events gave back was not only a focus on new researches in an hybrid zone, but also a laboratory on which ask questions about world politics and societies, with an open eye on science and art role in all the change and transformation zones.