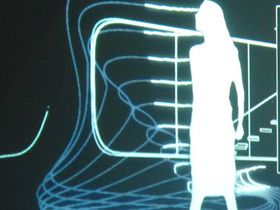 Deepening dynamics and relationships between art, science and technology, it’s amazing finding Res-Qualia.net, the website born in the 2005 from the Spanish researcher Raquel Paricio, which inquires the infinite world that links art to science, using a typical digital world’s approach. A precious database that encloses in itself some of the most innovative works and researches of the last years in artistic field, always tied to science and to the idea of evolution of the conscience.

Raquel Paricio Garcia (Barcelona, 1968) holds a graduate in Fine Arts and is currently a PhD candidate at the Technical University of Catalunya (UPC) in Barcelona about Evolvable applications in Art instalations. Her research interests include body consciousness and expression and multi-sensory environments and interfaces, apperception and new qualia. She is the creator of the www.res-qualia.net on-line space. She is currently granted by the Catalunya Goverment to develop her work and research.

Res-Qualia is part of a total plan that acts not only to create a useful and international tool for all the researches and the innovations crossing these themes, but most of all to become a reference and encounter point for artists and professionals to meet and know each others: to create networks.

That’s why Digicult project has a remarkable and intriguing affinity with it, and interest and determination that support the work of Raquel Paricio and her crew come up from her words.

Silvia Scaravaggi: I would like to start talking about Res-Qualia: how did you begin this project and how is it going on?

Raquel Paricio: “Res-qualia.net” project has born after 8 years working with projects on art-science and technology. Adding this at my interest on consciousness, body, perception, organisms, etc, I created this network of collaboration. The big part of the work is the result of my research and other people that collaborates on, like Monica Bello. But we receive a lot of contributions of people that send us their projects, research books, etc. We have collected in an “informal way” of presenting the projects, an extended data base that has been recognized by main personalities on this field. This data base expressed like a kind of magazine is very useful for researches, curators, etc. Recently some big exhibitions have invited people to participate, because they have found artists on Res-qualia. Therefore, to contribute in the research and diffusion is the main objectives of the web.

Silvia Scaravaggi: W orking in this way allows to build important and international networks and contributes to exchange and to evolve new plans and new theories. What do you think of the networks that you have already built?

Raquel Paricio: This kind of networks is not easy to be grown by themselves. You have to be always incorporating contents and diffusing the project. In any case the more people now the benefits to be included on a database widely visited, the more they participate. At the moment, Res-qualia, in less than two years of life has been visited by most of the people who work on these areas around the world, and we received a long congratulations by artists, theoreticians, curators, critics, teachers, scientists, etc.

In order to have a panoramic view on the main areas where contemporary artists and researchers work, linked to Res-Qualia project, it’s interesting to scroll the huge list of traced topics, that give, even if partially, a clear idea over the new creative zones between art, science and technology.

The term qualia since its very beginning characterizes the project, in its meaning of “minimal units of the conscience”, and immediately leads to the link between artistic and scientific research in relationship with the philosophy, the theories of the perception and the evolution, and the cognitive world. In the philosophy of the mind this term has been widely used as argument for debate and thinking, the same qualia have been both traced and denied in their existence.

In Res-Qualia the minimal units are firmly intrinsic to the art world. Observing the project from this point of view, and its linked topics, the plan is clear: the artwork and the relationship with science and technology find their own place answering to the human evolution. The exchange between these disciplines and experiments is not situated to the level of the mere use, but it makes important steps in looking for new points of view, unusual and parallel, sometimes succeeding to place art in a advantageous position to the development of science itself.

Silvia Scaravaggi: Raquel, reflecting on these reasons and proposals, you have selected a remarkable number of topics, some of which are complex and sometimes in contrast. I’m referring to words like: consciousness, perception, sinestesia, evolutionary systems, adaptive systems, artificial intelligence, natural phenomena, genetics, robotics, virtual reality, augmented reality… Why these topics and how they reflect realities you are working with?

Raquel Paricio: Well, these topics were only a starting point. First of all we defined around 50 topics that are common on expert literature, but they were so many that we decided to limit them. We are aware that they don’t define all the projects, even less the topic to treat. It is only an approximation to the content. In any case the topics are evolving by the time.

Silvia Scaravaggi: Why a research through the field of cognitive, perception world and evolution of consciousness?

Raquel Paricio: Well, as I have written in an article that appeared in the “a-minima” magazine ( www.res-qualia.net/aminima/index.php ), to evolve the consciousness is the only one possibility for human being to survive. Hundred of projects on the last decades have worked with the topic of “extended perceptions”. Working with perception implicates a new kind of vision, a new consciousness and in this way the possibility of driving a social change.

Silvia Scaravaggi: Which are for you the more challengig and inspiring networks and artistic-scientific researches nowadays working on A.I. and the enhancement of consciousness?…

Raquel Paricio: In the artistic field, if even a lot of projects have dealt with the topic of “perception” or “extended perceptions”, few of them lead to a real change on the senses and of course on the consciousness. Most of them have been conceived as “gadgets” or as simple experiments with technology. Planetary Collegium (promoter of several conferences, workshops, publications www.planetary-collegium.net ), is the major institution working currently in the topic of art and consciousness from a contemporary perspective.

Res-Qualia’s arguments, researches, proposals can be founded through evolvable.net, Raquel Paricio’s website, in which all her personal plans are introduced.

Silvia Scaravaggi: I would like to talk your artworks, POEtic-Cubes and Columna Ingravida , how you started and developed these projects?

Raquel Paricio: POEtic-Cubes ( Raquel Paricio & J.Manuel Moreno), will be a physical installation, a sculptural setup, able to self-organise and to adapt its shape driven by the stimuli coming from its direct environment. The installation works with the principal concepts of any living creature, developing the concepts of Phylogenesis, Ontogenesis, Epigenesis and Emergency. The main objective of the installation is to self-awareness, bearing in mind that your entire environment is reacting and adapting to your movements. Until now, this characteristic has been applied in art in software applications, but we are working with objects, with hardware.

The installation consists of 9 autonomous robots constructed in the form of cubes with displays in 5 out of their 6 sides. The cubes are in a room, so that when the room is empty they are grouped together as a 3 x 3 array, constituting a cell. When a person or a group of people enter the room the cubes start to move and place themselves around the people (holding the same distance between them). Therefore, the cell divides itself and differentiates to create an organism. If the person or the group of people move in the room (or even if one person moves the arms) the cubes move and the colours that are depicted in the displays change. Therefore, in this installation the people can observe how their actions determine the physical aspect of the organism (constituted by the set of 9 cubes), i.e., the phenotype, being thus a clear illustration of the genotype to phenotype mapping process. Learning (epigenetic) mechanisms can also be demonstrated since the reaction of the cubes (i.e., their movement) can be modulated depending on the actions done by people. The cubes also determine autonomously the state of the battery, and upon detecting a low battery threshold they go to a specific place in the room where the battery may be charged.

We started to work in the theoretical aspects of this project in 2004 and the implementation of the installation in 2005. Currently the project is in its last developing phase and during this month or the next one we will finish it (almost the 1 st phase). It is not very common nowadays in art-technology to take a long time to do pieces, but when you are implementing new developments in engineering like this case the development process is longer.

The core of the installation, the POETIC electronic devices (www.POEtic-tissue.org), is justified by their capabilities to provide adaptation to the environment and/or the user using evolutionary, learning, growth, self-repair and self-replication techniques. These features permit to produce an optimal response in dynamic environments or in the case this response has to be adapted to the requirements of a user or a group of users. These devices are also the result of a research during 3 years of 5 European Universities (Universitat Politècnica de Catalunya, École Polytechnique Fédérale de Lausanne, Université de Lausanne, University of Glasgow, University of York).

Juan Manuel Moreno Aróstegui , engineering, was the coordinator and also the co-author of this piece as well as of “Columna Ingravida”, a parallel project started few months ago (one of the rewarded proposals at Vida 9,0, international competition on art and artificial life www.telefonica.es/vida).

Columna ingravida consists in two spinal columns formed by two independent communities of robots able to self-organize themeselves, to adapt and learn from the surroundings. These columns of bones will be aligned and will walk on guided by the presence and the movement of the customer.

Silvia Scaravaggi: How are you developing this new idea, and which are the differences with the work made on POEtic-Cubes?

Raquel Paricio: This project is conceived with the same objectives of producing awareness, like the other one, but in this case I had focused the attention on the back, on having more perception of our back. Furthermore our possible conditions of ingravity if we try to beat the weight of the gravity. If you imagine on this moments your back, I’m sure that you try to adjust and to stretch it. If you focus this attention during a period of time certainly that you will obtain other perceptions and modify your own posture. We try to obtain these sensations with this installation composed by 2 columns that trails on the ground following the user by the back. The technology that we use implements similar concepts as those described above for POEtic-Cubes.