The Aware And Creative Technology Of Goto10 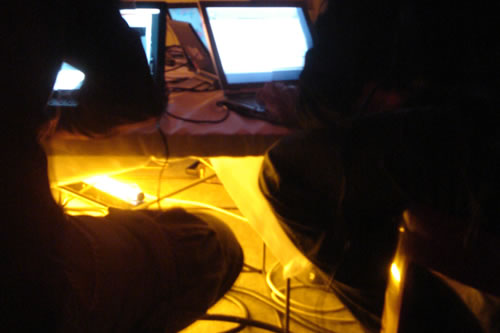 Freedom, autonomy and the control of instruments and creation processes should be the basis for every project, be it artistic, political or social, which could be considered as being democratic.

But the concept of autonomy, which brings with it the thorny and inevitable aspect of responsibility, seems to increasingly move away from our intellectual production environments on all levels, which are often transformed in empty and “blackmail” communities deprived of passion and incapable of putting together or sharing visionary ideas and projects of cultural and social transformation.

It is by chance, or maybe not, that the best proposals to overthrow the capillary control system of late capitalism are those that come from the ultra-technical environment of programmers/artists. The visionary idea, which is also realistic, is the capacity to network in an autonomous and free way, taking advantage and amplifying the technologies available, which can be a central node for a new model of life based on sharing information and processes locally and globally.

The collective GOTO10 (the answers of this interview were elaborated with the name GOTO10 by Karsten Gebbert, Claude Heiland-Allen, Aymeric Mansoux, Marloes de Valk and Thomas Vriet), active internationally for years in the technological activist environment, is a good example of how a group of programmer-artists manages to face and win against the swamps of our time through a creative, aware and thought-out use of technology. I interviewed them so that they could tell us about some aspects of their complex project.

Giulia Simi: First of all, something about your history. How was GOTO10 project born?

GOTO10: GOTO10 was created in 2003 by Thomas Vriet and Aymeric Mansoux. It started as a two man organisation in Poitiers, France with the goal to boost local activities surrounding experimental electronic music and digital art. After organising several workshops and concerts locally, GOTO10 became more and more international and grew into a collective of 11 artists/musicians/programmers from all over Europe. The organisation started to define its goals more clearly in 2005 and its main projects came into existence shortly after: A GNU/Linux distribution for artists, called pure:dyne, an IRC network linking like-minded organisations and hosting new networks and groups, make art festival, a workshop program to support artists in the use of FLOSS, and the artistic and reflective output of the collective in the form of performances, exhibitions and lectures.

In recent years the organisation has added two important projects, mainly to make the reflective side of GOTO10 stronger: the Digital Artists’ Handbook (in collaboration with UK based organisation folly) and the FLOSS+Art book, published by Mute publishing Ltd. The first is a practical guide to using open source software within a digital art practice, the second reflects on the growing relationship between Free Software ideology, open content and digital art. It provides a view onto the social, political and economic myths and realities linked to this phenomenon. The FLOSS+art book is written, designed and published using FLOSS only, has an open license and is freely available online. Both books contain articles written by numerous experts in the field.

Giulia Simi: Your first purpose is to support FLOSS (Free/Libre/Open Source Software) as independent method to create tools for digital arts. This practice involves programmers and artists working together for the autonomy of creative process. I think it’s a political and symbolical activity that would be very important, not only into the the new media art environment. Do you think that common people, like standard pc users, would be ever able to control their technological tools? And if yes, do you think this could represent an important changement in social life?

GOTO10: First of all, it is important to understand that in GOTO10 we do not have artists and programmers, but software artists. It is for us an important distinction that marks the shift from the “software as tool” to “the software as medium” paradigm. In this sense, from our perspective there are 2 very important points that lead on from there:

1) FLOSS is not just alternative to proprietary tools but an entirely different way of thinking and using computers.

2) The key components of most activities associated with FLOSS are sharing information and learning.

This by itself is an entirely different philosophy, one that emphasizes education and experimentation over a passive consumer attitude. You could say that this new mode indeed is already a significant change in a positive direction, one that has definitely wider implications than only for software-artists or programmers. Generally it is of course a good development when the GNU/Linux desktop market share grows (and thus attracts more developers and interest in furthering functionality and user-friendliness in much needed areas). The key aspect that makes the platform interesting for us and many others though, is its freedom and hack-ability. In that sense, from our perspective, its not really as important whether GNU/Linux now is on its way to become a big player in the desktop sector, but that we can use it to profoundly change our approach to how we collaborate and produce, understand ownership and property.

Giulia Simi: How much fundraising is important in your work and what are your strategies to carry on your projects out of mainstream contemporary art?

GOTO10: All of our projects start to exist as a passionate act of creation. Most of these are not funded obviously. As such GOTO10 is a creative sandbox. If some of the experiments (let it be art, new workshops ideas, music, software projects, events, etc…) start to grow and become stable then we try to get financial support for it, or simply show it around depending on the project’s nature.

On the other hand, bigger projects need particular care once they’re out of the sandbox, for example the “make art” festival which takes place in Poitiers (France) couldn’t exist without public funding (mainly the territorial collectivities and the state) and also the help of different partner organisations local and international.

Generally, because funding free software and art is difficult we always try to be clever with money. As a consequence it is often that we “trojan” projects within projects. For example if one of us get an artist in residence somewhere, we will tend to use in-house GOTO10 software for the projects, so that this technology can be developed further, be documented, tested, etc.

In the end, we don’t have any particular strategy for our work except for keep on doing what we like to do and not force ourselves in compromises for the sake of visibility in such or such art scene. The most important thing is to go on inventing new kinds of projects and working with people with whom we share the same vision of the free and open source culture and arts.

Giulia Simi: Your activity is mostly based on capability to make network. Particularly, you don’t have a physical meeting place so you communicate mainly via IRC and mailing lists, that are the first and oldest tools to make network in internet. But what do you think about web 2.0 and social networking platforms? Do you think it could be possible to use them in order to make creative experiments?

GOTO10: Web 2.0 is a bit vague, it does not mean much, but there’s no doubt that the advances in open technologies in recent years have enabled websites to do really clever things. Still, we are not so keen on using or promoting social networking platforms – the gated community model suffers from “vendor lock-in”, which is completely against the spirit of the free and open Internet. The technologies (for example RSS and Atom feeds) are there for a distributed and open alternative, whereby each individual controls their own content, but can still interact with other sites and build a wider community that isn’t controlled by some corporation with profit in mind. Furthermore these platforms usually miss the point of human communication, focusing only on the transfer and sorting of information and playing on the ever growing ability of the online homo sapiens sapiens to contemplate himself in the mirror.

Of course this does not prevent artistic experiment to be done in such environments, as long as they’re not just gratuitous demonstration of the use of a certain technology, but as network, we find them rather poor and limited compared to what the Internet has to offer and still allows to do today. As for network collaboration we indeed use rather “old” systems and protocols because they work perfectly fine and are not bloated, so why change? Of course this has nothing to do with a systematic refusal for more recent technologies or novelty innovation. Quite the opposite – we make an extensive use of distributed version control systems, virtual servers, and are always keen in transforming our work-flows, network environments and try/adopt new ways of sharing information.

Giulia Simi:Last question about your near future projects: what are you working on in these months?

GOTO10: Amongst GOTO10’s latest projects was the launching of our netlabel GOSUB10, presented in March 2009 during Wintercamp in Amsterdam, releasing innovative new music and audio-visuals created using FLOSS. Within the framework of Linuxwochen Linz 2009, GOTO10 members developedmode +v noise, an IRC-based collaborative music platform and held a workshop around it. The next steps for GOTO10 are to further develop and professionalize their long term projects such as pure:dyne, art.deb/people.makeart and the digital artists’ handbook.

Following Summerlab in Gijon, there will be a week-long development session of pure:dyne hosted by the local center for arts, LABoral, where we will mainly be aiming at releasing a new major version of the platform. Finally, make art 2009 will take place during the second week of December this year, so stay tuned and subscribe to our newsletter for more info on upcoming gigs!.