Atm: The Artistic Nomadism Of The New Millennium 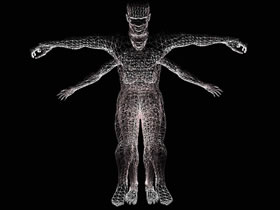 The speedy development of new technologies and their incursion into our everyday life, into our way of thinking and relating to the others, into our forms of expression and art, the advantages and dangers they are bringing with them and the direction they might lead us to; all these are subjects that more and more urgently need meditation.

While most of the people are experiencing this radical process unconsciously by entrusting spontaneously their behaviour processes to the presence and at this point the need for body extentions such as mobiles, computers and the Internet, many thinkers, researchers, scientists, technicians, organizers and creative people are trying to monitor these changes, to find out how to keep these means democratic and free by protecting them from the abuses inherent in human and mass behaviour, to figure out the new artist’s shape, now very different from what we were used to.

Technology started to become part of everyday life in 18th century, modifying social patterns and what human beings thought about themselves and their potentials. In the 20 th century that transformation got such an acceleration it could be considered a revolution: new languages developed, together with new ways of thinking, new behaviours, new dimensions. Today we can live on different levels, communicate and exist in virtual dimensions, make up characters and parallel lives, give to written and immediate communication most of our relationships, thus opening the doors of our intimacy or of deception.

Inevitably such social changes have been absorbed by art, which has always been the reflection, interpretation avant-garde and metaphor of real life and has always tried to use everyday tools breaking existing patterns (attitude which can be properly expressed by the word hacking ). Nowadays artists no longer work alone, rather they are permanently surrounded by the rest of the world which pulses in their computer’s monitor; they often travel, they move from on place to another following artistic synergies; they are deeply influenced by numerous disciplines, both traditional and totally new, which become part of their multi-cultural inspiration and suggest them still unexplored expressive ways. Artists with their works are nowadays an immediate and simultaneous presence, they have new ways and spaces (not just places) to show to their audience and make them an active and essential part to make their piece of art exist.

The concepts of expression, presentation, organization, intellectual skill and role definition are changing. Artists, institutions, galleries, organizers, critics, means of communication melt together to create new personalities which still have no definition: the borders between geographical,conceptual, aesthetic and ideological roles have been gradually deleted as we are heading for the much discussed and complex phenomenon of globalization.

These are the topics important to Art Tech Media , the annual series of discussions which started in Spain in 2006, after a two-year preparation and involves museums and contemporary art centres, medialabs, foundations, artists, galleries, critics, committees, means of communication, visual artist associations, producers, cultural agents, public and private institutions and all the sectors related to art and new technologies.

The big success the event had last year has led to the First Art Tech Media International Congress, which will take place in Madrid from 8th to11th May 2007 . The project’s objective is to contribute to the reflection and analysis of new technological media in Spain within an international context and to develop proposals for the creation of a permanent platform (a Digital Arts Institute) that can stimulate production and co-ordinate the distribution and the promotion of Spanish digital art around the world. The event’s venue will be the Ministry of Culture, Cervantes Institute and Casa América , where respectively discussions and projections on the Spanish situation, on the relation between Spain and Latin America and on what is going on in Latin America will take place. Institutions, festivals, museums, technological firms, universities, artists and associations will co-operate.

The fathers of the event are two Spanish artists, Montse Arbelo e Joseba Franco , who, from the very start of their activity, have dedicated themselves to co-operational and “transactional” activities. The main goal of their project is to explore the thinning down of the line which separates art and real life and they pursue it by their travels during which they organize shows, installations, conferences and events.

What they have done well represent the fusion of the roles of artist, organizer, critics and promoter. Art Tech Media International Congress will present the international contributions gathered and selected during several months: reflections on the present situation of digital art in Spain, proposals for alternative models, examples of international avant-garde centres. The list of the famous participants is so long that we do not have enough room here to name them all. You can check the whole list on the event’s web site (among them Gerfried Stocker, director of Ars Electronica in Linz; Alex Adriaansens, director of V2 in Rotterdam; Andreas Broeckmann, director of TESLA media>art.

On the web site there is a questionnaire aiming at gathering experts’ opinions to formulate reflections on the changes and improvements which could be necessary for the production and distribution of digital art and to create the basis for the possible foundation of the Digital Arts Institute in Spain.

Besides, the web site offers a rich section of links diveded into communities, institutions, festivals, blogart and so on. An event which promises a dynamic and constructive interchange and underline the importance and necessity of a live meeting, though new technologies make co-operation and simultaneous presence all over the world possible.