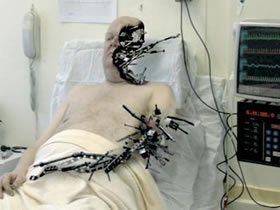 Technology progress miracles have always generated utopia and nightmares. Hopeful visions of a better future, but gloomy and catastrophic predictions too. The risk within the rash use of scientific discoveries and their products is a subject which, since the First Industrial Revolution, when the panorama of cities and suburbs started to show the signs of a firm “artificial” invasion, has been animating sociologic debates as artists, writers and filmmakers do.

From Frankenstein to Blade Runner, where the dangerous connection was between man and metal, between nature and robotics- up to new backgrounds opened by bio and nano-technologies, the subject of rebellion and sequent loss of control of man, of one of the two parts at stake (both nature and technology itself mature enough as to become a second nature) is now a topos.

The recent short film Metalosis Maligna relates to this glorious and frequented tradition . The film was directed by the young Dutch film-maker Floris Kaayk (1982), founder with the coeval and colleague Sil van der Woerd (1982) of Microbia Films, a little production house gathering both works directed individually and those directed in pair.

Metalosis Maligna (2006) can be considered a docu-fiction: the short-film follow, at a stylistic and iconographic point of view, the form of the television documentary, telling the story of a mysterious, spectacular and disturbing illness. Completely fictitious but incredibly verisimilar. The bacteria ( streptococcus metalomaligna)’s infection attacks people with metal prosthesis. And if, so far, the rejection of the hosting organism was the only risk, the film imagines a future in which the prosthesis is alive and dangerous, interfering and ready to grow, branching within and outside organic tissues. They can even replace flesh, in an arborescent tangle of metal outgrowths.

The fiction is effective and well built, the stylistic elements of the documentary are followed perfectly, and the union between traditional shot and computerized graphics is perfect. The scenery, deprived of any scientific fundament, manages to result disturbing exactly because built with rigour and control of the used language.

It isn’t the first time the two Microbia film-makers confront with the encounter/clash between natural and artificial. While van der Woerd in Swim (2005) deals with fecundation with a terse and evocative style (including science fiction elements), Kaayk, with The Order Electrus (2005) had already showed his interest in adaptation mechanisms of natural environment to technologic invasion. In this short-movie the main characters of this distopia are insects. A new species of “electric” beasties born spontaneously within industrial structures capable of reproduction, defence and attack.

Shots, editing and performing voice too are taken by a common divulging documentary, maybe broadcast by Discovery Channel. The threat, as in Metalosis Maligna, comes from evolutionary mechanisms’ extraordinary power. Capable of fighting and overcoming any human intervention, however interfering it could seem. It is an evolution which doesn’t mean just self-defence, but which looks like vengeance.