A Movie About The Revolution: Seize The Time 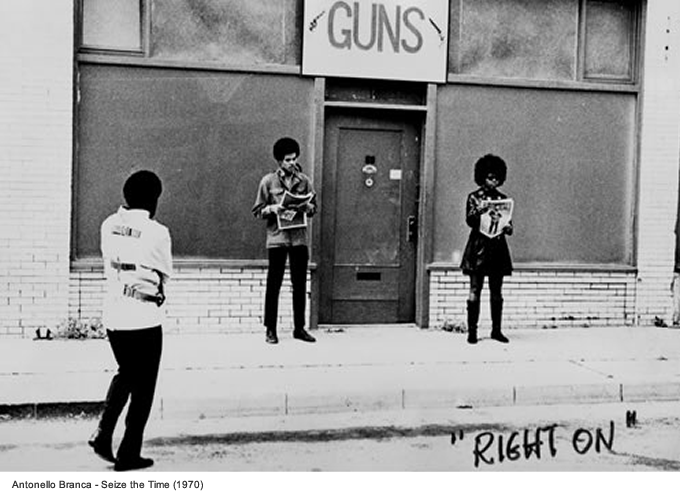 From June 1st you can find “Seize the Time” in bookshops and online stores. The DVD + book (Federico Carra Editore, 19) contains the text published hereby by courtesy of Kiwido.

Nowadays, “Seize the Time” could be labelled as a docufiction about the Black Panther movement made in 1970 by the Italian filmmaker Antonello Branca. This remarkable work is finally available again to the public after years spent in oblivion. It can be possible thanks to Federico Carra and his Kiwido and the collaboration of ACAB (Associazione Culturale Antonello Branca).

Seize the Time is a movie about and with the Black Panthers. It brings together drama, fiction cinema and documentary cinema. Antonello Branca was one of the few Italian filmmakers able to witness American society from within. With his camera he was quick to catch the social changes taking place in U.S. society during the mid ’60s. As a mark of such quest, the DVD published by Kiwido also contains “What’s happening?”, a live documentary of 1967 about the Beat Generation and Pop Art, a portrait of America seen through the eyes of artists and intellectuals who were about to revolutionize (forever) the international artistic panorama. Allen Ginsberg, Roy Lichtenstein, Fred Mogubgub, Andy Warhol, Marie Benois, Robert Rauschenberg, Leon Kraushar, Gregory Corso.

This well-chosen combination of two supposedly different works ” a “political” film and a documentary about the world of art”, puts in evidence the curiosity of the Italian filmmaker, a lifetime passion ended in 2002 after more than sixty undiscovered documentaries. [Alessio Galbiati  Rapporto Confidenziale Nº 25]. 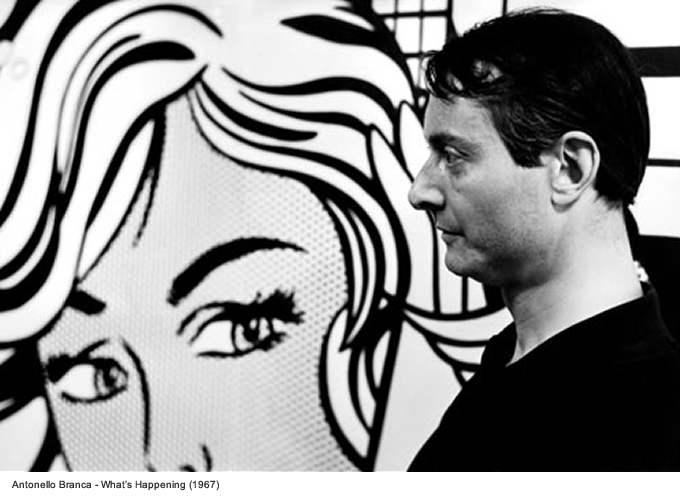 The author of the article is Nobuko Miyamoto, Artistic director of Great Leap, a non-profit arts organization based in Los Angeles and founded in 1978. Nobuko, music and theatre author, keeps creating art works believing in the power of art to transform society.

A MOVIE ABOUT THE REVOLUTION
di Nobuko Miyamoto

I first met Antonello Branca in 1968. He was in Los Angeles to make short documentaries about California on behalf of the Italian television. Actually that was a preliminary work for a film he wanted to produce. It was the story of a young man passing from Black Nationalism to Revolutionary Nationalism, joining the Black Panther Party. Antonello wanted to make a film in a revolutionary way: with no screenplay, no professional actors (except Norman Jacobs) and with little funding. A “guerrilla” production with appearance by the Black Panthers.

He asked for my help. I knew very little about filmmaking (apart from my appearances as a dancer in movies or musicals) and completely nothing about politics. Actually, I was a little scared of the Black Panthers, but one of Antonello’s major skills was to get the answers he wanted. I agreed and jumped into the water. At the time many people jumped into the turbulent waters of revolution.

It was 1968 and America was fighting on two fronts: the war in Vietnam and a war at home. There were students protesting against the system all over the country, marching against military service and war; women joined to ask for equal rights; Cesar Chavez organized farm workers and the Grape Boycott; Native Americans occupied Alcatraz; the young Americans flared up for freedom, while music was blaring out rebellion. But it was the Black Panther Party to draw the American Government’s attention and rage. The legacy of Malcom X, the activists wearing leather jackets and black berets, armed with Mao’s little red book and Marxist-Leninist theory, the rifles to defend themselves and a ten-point plan made them the protagonists of that revolutionary stage. 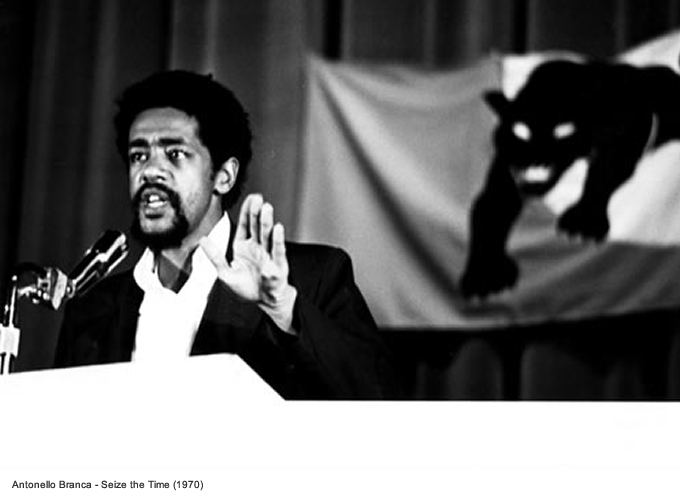 I will never know how Antonello could ask them to appear in the film.

They were smart and made the media and the black community the “living theatre” of their war. They used to head for the capital of California with rifles in their hands to protest against the oppression of the police. The fighting with the “swines” (that’s how they called the policemen) was endless. The police assaulted Panthers’ headquarters all over the country. Black Panthers’ leaders Huey Newton, Bobby Seale and Geronimo were arrested. Bunchy Carter, Fred Hampton and others were assassinated. The Panthers helped their people in different ways, like the Free Breakfast for School Children Program and health service programs. At the same time, they defended their political prisoners and were busy in the armed struggle. How could they take into consideration the idea to participate to Branca’s little production?

Antonello was like this. He made them agree. Everyday our assault crew (Rafael, Norman and I) tried to follow Antonello’s creativity sharing food and drink and a flat, having meetings with Panthers’ leaders who used to come in with their rifles. Elaine Brown’s songs where the sound track Yes! That’s what inspired the title: “Seize the Time”.

Meeting Geronimo. Geronimo arrested. We make the video “Breakfast for Children” serving them eggs and love. People’s power! Right on!

The documentary first. We go to Berkley where protests on defence of “People’s Park” are taking place, the tanks advance, the National Guard marches, I support Antonello shooting the police holding bayonets to his camera. Tear gases are choking us at Berkley campus, crowds are marching, I’m hit by a stick and I can see the violence of the policemen. People’s power! Right on!

In New York we shoot the Young Lords’ takeover of a Church in East Harlem; back to Los Angeles, we shoot the Panther Erica Huggins giving birth to her baby. Eldridge Cleaver in Algeria, Huey in prison, in California. The Panthers come to a political split. How could Antonello think to make a film in such a dangerous and chaotic period? That documentary was in his mind like improvising in jazz, made of people and situations met on the way as the world was spinning around us. To me, such experience was like a close look to another side of the Panthers. I will never forget a lecture on community politics by Masai Hewitt, the Ministry of Education, in Los Angeles. A young brother could barely read out loud from the Little Red Book. 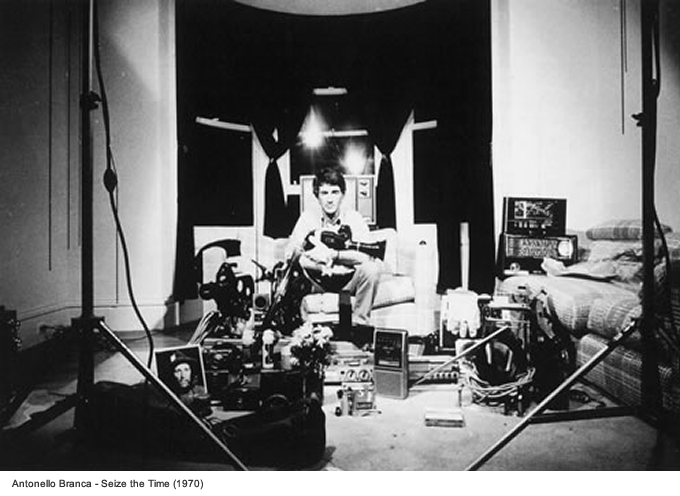 Masai had translated without indulgence the meaning of “serve the people” in the street language. I thought: “That’s amazing, that’s real love for the people.” Then, someone called me sister at the Breakfast for Children Program. I was a stranger, a Japanese-American, but that person made me feel part of the family. That was love too. I wasn’t scared of the Panthers anymore.

This article is just a quick glance to our experience in making “Seize the Time”. Maybe the film was only an excuse to take part to such an epic moment, to learn, to eyewitness their sufferings and dreams, to breath their longing for revolution. Making a film about the revolution was really hard, but revolutionizing ourselves is even harder.