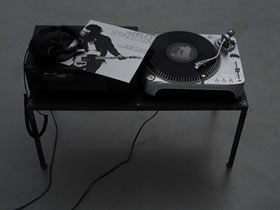 He lives and works at Brooklyn and he is one of the most interesting digital artists in America . His works are exhibited at the Whitney Biennale, at the Guggenheim, at the MoMA and the PS1. He began with the hacking of filters for the Nintendo, continued with a version of a slow motion Tetris and with a 15 minutes video on Super Mario.

Recently he has composed a Colors film of Dennis Hopper in a symphony of single lines of colour, extending the first line of pixel in the all screen and repeating the same process for every line of 33 days of projection. He made Dazed and Confused of Richardson Linklater dub in English by an Italian office and he played on the synchronies of two projections of the video clip Sweet Child O’Mine of Guns and Roses in which a note was missing from a version. His last effort entitled the Bruce Springsteen “Born to Run” Glockenspiel Addendum, where the music of the Boss is enriched by concords and silences composed and played on the same lines of the track in question.

He is Cory Arcangel, born in 1978, a polyhedral artist and in evolution. His works explore the relationship between culture and technology, in particular those between the end of the 70s and the 80s, recycling and contorting pre-existent data taken from the most different medias, in a “second coming” of the post post modernism. At the phone we have talked of the artists who have influenced him, of hacking and of his work.

Monica Ponzini: How did you begin? Your education is extremely musical, where does the remaining come from?

Cory Arcangel: Yes, I studied music. The whole art thing, I guess, it was kind of second hand knowledge  that was kind of rubbed off on me without me even knowing it -. I grew up in Buffalo , has a really strong history of progressive media artists, like the Vasulkas, Paul Sharits or Tony Conrad. Video art was the kind of art form that I was taught first, there are a bunch of non-profits that teach how to edit video, there are a lot of places where they play video art, and all my teachers naturally pointed us towards video much before I got to college.

Monica Ponzini: And the programming?

Monica Ponzini: Which artists did you take inspiration from at the beginning and today?

Cory Arcangel: It’s hard to say. Probably jody.org, I think the first generation of Net-artists I always really liked, like Olia Lialina e Peter Kozek. And then there are the “art-artists”. I think it’s harder for me to say what artist I like, because I like particular slices of certain artists, like early William Wegman videos, are just incredible, some of the old Jack Goldstein videos, Alvin Lucier, the composer, is really amazing. Steve Reich, I think all his stuff is very good, very formal.

Monica Ponzini: Artists who don’t belong strictly at the world of art?

Cory Arcangel: Gary Larson, who did the Far Side, Andy Kaufman those I think are my influences outside of the art world. So it’s all kind of mixed in: composition, comedy and process art.

Monica Ponzini: Projects for the future?

Cory Arcangel: I have an exhibition coming up in Geneva in March and I’m trying to figure out that right now, trying to decide what’s in the show and trying to pin down. But it’s mostly ready. And I just had a show in New York at the Team Gallery, that was a lot of new work. So I’m gonna try to keep that momentum happening. What else am I working on? Gonna make a little event in New York, it’s gonna be kind of a video document of what kind of art it’s been uploaded to the Internet by people, it’s gonna basically highlight the fact that there’s no information on conceptual art on the InternetI mean there is, but if you look up at YouTube and Google Video there’s almost nothing. And my website, I’m always trying to do it a little better.

Monica Ponzini: It seems that much of your work in association with others is made with the use of phone or email. Do you think that the personal interaction is old in the artistic process?

Cory Arcangel: I’m gonna say no. In any project that I’ve done, where it was created mostly over email or the Internet, we always tried to meet up at a certain point. Email is a terrible way to communicate, worse than the phone. I think that the more people are relying on it, the more is gonna make personal interaction important. It’s like music: MP3s are devaluing the value of recorded music, but are making performance more valuable. That’s the way things are going, I don’t think that anybody has anything to get all worked up about. Not that you are implying that, but I think a lot of people are implying that. Just simply makes that time that you have with someone more important.

Monica Ponzini: And the work of group? Above all in the recent age there’s the trend to work in a team, to exploit the different specializations of everybody

Cory Arcangel: Any time technology gets into the mix, it’s not normal for the artist to know how to use it, and that’s probably the reason that more and more artists need to hire people. I come from a slightly different era, but I like to know about the technology the Paper Rad project, Super Mario Movie, is a good example of the other way. Paper Rad didn’t know how to work the Nintendo, but I knew, but I don’t know how to write scripts, but they did we just basically made a movie, I was kind of the cinematographer in a way. For years I worked at a postproduction place, so I was the guy helping artists with technology.

Monica Ponzini: What is the hacking for you?

Cory Arcangel: I like the original definition of the work hacking, which I think almost sums up the things I do. Originally the word hacking meant doing clever stuff with the computer, often with a sense of humor. You take some code, you do something clever with the code, you cobble together things that weren’t meant to go together or you do something clever with the architecture or the way the computer operates, that’s what hacking means to me. I recently have seen Richard Stallman , the guy who started the GNU movement, giving a lecture, I think he described hacking something like John Cage’s silence.

Monica Ponzini: I make you the question that Lev Manovich published on his site inviting his audience to answer. I made it also for other artists. Since we live in a culture of the remix there must be limits and an ethics of the remixing?

Cory Arcangel: It would be ridiculous for me to say no, everything I’ve ever made it’s some kind of remix. Do I think there should be some ethic? Yes, sure, I think there should be an ethic, you can’t take credit for something you didn’t do and I think transformation of context should be clear. The last thing I’ve made, a project called The Bruce Springsteen “Born to Run” Glockenspiel Addendum, was not a remix project, it wasn’t deconstructing a work, it was adding on, but of course it’s played on the whole idea of remix. Even myself, it’s been like “Well, maybe it’s time to start adding things again, maybe it’s time to start composing again”. I’m questioning it myself and that work I think is a really good example of maybe one possible solution. It exists by itself, but also exists in conjunction with the previous work.

Monica Ponzini: Do you want to define your work? You wake up in the morning and say: ok, also today I will do

Cory Arcangel: When I wake up in the morning I have a hundred thousand things I would like to do. For example right now I would like to have a running list of links on the home page of my website, that’s because I would like people to go back to my website a couple of times a day, and those links are simply the things that I think are cool on the Internet, which is a common thing right now. So those links are simply my interests and my territorial vision. It fits in the whole thing that the artist is just a curator, the whole issue of context and what is art, especially after the Pop Art and the Readymade. Now with the web, all that stuff goes out the window. With the Internet you’re dealing with distribution and accessibility, which is million times what you can possibly hope for within the art world. I think that dynamic is kind of interesting I wake up in the morning and I just try to figure out what I am interested in and how that is related to the different contexts I want to place it in  do I want to put it in a gallery, or on my website, and what’s the difference.