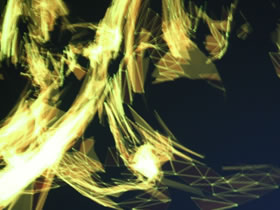 Rotor is a young creature that enchanted thousands of people since its born a year ago. The show treaded the boards of the most important new media festivals in the whole Europe  from the debut to V2 going through Netmage , Sonic Acts , STRP! citing some examples. The two Belgian authors of Rotor, Boris and Brecht Debackere , came back to Italy to participate at ScreenMusic, curated by Digicult.

Boris and Brecht Debackere arrive with a trolley, inside it their tools : cables, laptops and the code , invisible epicentre of audiovisual tremors. They both say it: Rotor is a compact system, an architecture of parameters they enjoy manipulating live, generating a unique performance each time.

It’s Live Cinema, instantaneous filmic creation, immersion of the perception in an audiovisual evolving space, emerging practice who’s searching for new modalities of narration, born from the evolution of the soft and hard digital technologies. You do not imagine on the rhythm of the music, but rather explore new ways to interact between projection, performer and public. A new approach to the audiovisual language, created from scratch of audio-video narration generated live, digital handicraft that uses programming as its principal tool, wise research of interation between man and machine, between ideas and their own realization.

The starting point of every performance of Live Cinema is a system based on complex relations between the composing elements. Not a one on one relation, but rather a net of variables in which every factor, performer included, alters its state and its path. Rotor is a creature that liven up every time that the machines turn on, playing with it: without action, nothing happens.

Boris and Brecht formed in their north-European zone where technologies and art fuse in a rich research and experimentation. Boris has been student of the Interfaculty of Sound and Image of Den Haag , rib of the historical department of Computer Music of the Royal Academy , while Brecht studied Image and Media Technology at the University of Hilversum. The young couple lived in first person the debate that’s going on since years about the cinematographic language in the era of the instant creation: Live Cinema is talked, questioned and explored.

So it is not a case if this project is the result of a research about the classical notion of cinema and the Live one, between the representation of the real world, linear and the virtual one. The abstraction of the traditional filmic beliefs brings to the loss of reference points. It is no more the look of the camera that moves in the space but rather the space that rotates around the look of the camera creating shapes and sounds that involve the perception of the observer, disorienting it. Rotor is an audiovisual virtual space that rotates around itself, as it is challenging its possibilities. It is exploration of a new space through images and sounds that have no direct connection one with the other, but interact through the system, made of rules and parameters. The system in this case is represented by a cube composed by nine 3D objects and audio samples , visual and sound elements that generate and evolve in a constant dialog between the code , DNA of this digital world, and the performer.

I met Boris and Brecht Debackere in occasion of their interview for the realisation of the DVD Live-Cinema.01 , first compendium on this new form of art that collects the works and testimonies of 5 artists, project wanted and produced by Worm of Rotterdam.

Sara Tirelli: Which is the concept behind your work? Which are the roots that brought you to Rotor?

Brecht: The rotor concept is like really a concept where images and sound are really into each other they flu into each other and then we work with that concept and we apply it to images and sound. We were looking at a representation of a virtual space through the eyes of a virtual camera but the way the camera works with linear perspective is programmed into the graphic’s process of your computer so deep in there that you can hardly get it out. So what we tried to do was to find out what the intrinsic characteristic are of this virtual camera compared to a real camera. The camera only sees a certain part of the object it makes a cross section and scans through the object and scans the virtual space. So this is one of the characteristic of virtual space wich is unique in that space, which can not be done in real life with the real camera

Boris: We were missing kind of point of view of reference in abstract imagery and also in abstract sound and we were looking for a system where we could make something that was not just arbitrary… so we came up with a cube divided into 9 parts and we place images 3d objects and also samples in that and then we start spinning that things .

Sara Tirelli: So you tried to create a real system but how does it work?

Boris: So what we did it’s to set up a set of rules which are in a way stuck to that position in a bigger space. Rotor spins the objects around placing them in a different position in space which has different parameter attach to it . So the Rotor, the position of the objects and the samples is actually the system we actually take the space and rotate the space or move the space instead of moving the camera .

Sara Tirelli: The virtual reality make us think to a digital transposition of the real world, while your work reach an abstract imaginary. How does the relation between real and virtual develop in Rotor?

Brecht: It’s like a normal film set up where you always introduce the characters who are going to play and then there’s the confrontation.There’s a tendency to make everything seems more realistic or resemble reality more but in a way what we do it is as realistic. We just represent through the virtual camera photorealistic image of a synthetic world. I do believe that using abstract images in order to get the public immerse in the moving or to go along with your images and sound that there needs to be some certain level of realism. And realism can be in how objects moves or in the color skin that it’s used or in the representation of space.

Boris: All this different elements help to get the user involved in the movie and not to say what am i looking at…it’s a trip to somewhere else… i think this is the main goal we are trying to make in a abstract sense present a kind of image and sound trip.

Sara Tirelli: This project is the result of one of yours collaborations. How do you two manage the work?

Brecht: On a technical level we both have our skills , I work on the visual side while Boris on the audio one, but on a conceptual level and content wise we evaluate each other works we collaborate on how to set thing up and how to build climax the all piece, from the composition to the presentation of it.

Sara Tirelli: Which are the software you use and most of all how much the programming phase is important in your work?

Boris: The software we use for video is Jitter ( Max/msp) while the one for audio is Reaktor. Coding is was an important aspect of making Rotor because we started from a conceptual framework within which we wanted to work. We were thinking of the idea as described in the previous interview and on the site with the with all the camera’s and samples. The only way to see and hear the results of this concept was to program it ourselves. After a bunch of versions we arrived at where the work is now, but with each version there has been a evaluating stage, where the resulting image/sound was analysed and possible changes were tested, things re programmed, programmed differently to get a certain result,…In that respect, sofware like jitter or reaktor allows for relatively quickly building a test-program to see the result of a concept, a kind of sketching.

Sara Tirelli: The practice of the Live cinema is spreading during last years and arguments such as the real time generation of audio and video and interfaces to control this interest the insiders in this moment. However, it seems that the limit of this performances is the immobility of their presentation. Many times the artist behind its computer seems controlling its email and something pre-recorded seems being projected on the screen. Which is your opinion?

Boris: In a lot of Live cinema performance is a bit like a cat watching television. The cat sees the screen but doesn’t go behind it. You cannot see inside the computer so in that way it’s important to somehow explain the system where you are working with or to have a kind of exposure of the system.

Brecht: There is a plan to also make an interface and make a more performance kind of thing or basically just make a physical object which represent the rotor which you can spin around in every direction and move so the relations between the object and the system becomes apparent on the screen.