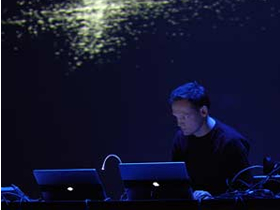 It is called Xerrox, it is inspired to the photocopy process, and it is a project that explores the borders of recognizability of an information. It is the last creation of Carsten Nicolai , a.k.a. alva noto . It is a live for laptop and video, where the original sampling is reproduced and varied, disturbed to create a product that shade off its characteristics without losing completely its identity. The result is a synaesthesia where noise and glitch transfigure the information to create a new code, that keeps some properties of the origin.

Carsten Nicolai is one of the electronic experimental music guru since years to an international level. Immerged in a creative flow that rarely repeats or trivializes itself, Nicolai is subject to a constant process of music evolution with no end. With the other masters that brought the electro sound in the academic areas, Nicolai has been able to become a reference point not only for those who see him as a bridge with tomorrow, but also with everyone fascinated by his glitch, noise and minimal aesthetic, able to conjugate in a perfect unicum of sound and images both the technique and the modern aesthetic, rich of references to the cultural traditions of the past, backbone of the nowadays audiovisual analysis.

He is able to attract on him the attention of an entire community of artists addicted to the electronic music research and to the potential of the visual representation of the digital sounds. Alva Noto founded in this sense, together with Olaf Bender , during the last years the Raster-Noton (the real prototype of the cult label, cured in all its details of its packaging, as well as aggregation centre for talented musician and experimenter as in the original idea of Nicolai in his project Noton.archiv fuer ton und nichtton , from Ikeda to Basinski , from Lippok to Cascone , from Nibo to Nicolai himself). He also established a series of artistic collaboration, such as the universally known with Ryiuchi Sakamoto .

We do not want to resume his production, a glance to the Raster Norton site is sufficient to that. We talked about Xerrox and lot more in the occasion of the American premiere at The Kitchen of New York , historical centre dedicated to video, music, performance and avant-garde dance .

Monica Ponzini: Can you talk about Xerrox? In which way do the reproduction and the deformation of the sound become process and contents of the project?

Cartsen Nicolai: For me it’s an interesting project, I’ve been recording for almost a year and in a way it’s the first time that I use sound material that contain melodies. Xerrox is melody-oriented, and there’s a reason for that: memorizing sounds for us  which is related with copying, multiplying, being afraid of loosing the original – it’s connected with melody. I’m interested in understanding at what point you loose the “image” of the melody, at what point, after operating distortions, you loose the original information.

In the copying process, if you keep copying and copying, you create some artifacts which contain “errors”, distortions, artificial interpolations, but they’re still belonging to the original. I created an application that works as a copy-machine: you load a file and you change the parameters. As in a photocopy you can change contrast, here I can change the bit-rate or the frequency. It’s a very simple digital tool, but what I’m interested in is the quality of the artifact: even if I add noise, you can still hear the melody underneath. And even philosophically, it’s interesting to understand if an artifact can carry the information of the original.

Monica Ponzini: Can we compare it to a DNA track that remains throughout the generations?

Cartsen Nicolai: Yes, in a way there’s a mutation of the original. In the end, you listen to noise, but you still hear melody, even if is almost gone, and the performance is like a crescendo. The concept is still in process for me: I put together some recordings and every time I do it, I’m curious to see what happens. For me is interesting from a perception point of view: how far can I go in destroying the sound and still maintaining it recognizable?

This project is kind of unusual for me. Before, I did more source-oriented projects. In a way, this is the follow-up of the Transall series, in particular Transspray , that even in the title suggested an idea of “spraying” the information. In Xerrox the visual part especially is pixilated, sprayed, it’s an image but at the same time is not, it’s nothing clear. It becomes an interpretations of yourself, of what you can project in there Everyone sees something different in it!

Monica Ponzini: I know you talked about it with Scanner as well. Which is the difference between recording and performance? Which are the implications of both?

Cartsen Nicolai: Recording and performing are completely different things. Recording comes first: especially if you do electronic music, this is the first phase, then comes the performance, which is totally different. When you record you don’t have any kind of technological or environmental problem, you’re in an ideal situation. In the performance, you stick to the moment. If you compare performing to recording, recording is a sort of rehearsal.

Monica Ponzini: Lev Manovich last year posted on the Sintesi Festival some questions about digital cultured. One was: as we live in a remix culture, are limits necessary? And is there an ethic about remixing?

Cartsen Nicolai: Interesting question. But first of all, I would ask if we really live in a remix culture. It’s a very post-modern idea, but I believe that we can still do make new things without remixing. I do sound from scratch myself, of course referenced to a cultural context. I think you have to think why you’re using samples: in music, there’s a long discussion about using sampling and remixing. If sampling didn’t exist, we wouldn’t have music, they’re strictly related. Before people would memorize and redo melodies, it was part of the culture. Today sampling and remixing are connected to the music industry; I don’t see a big difference between memorizing a piece and storing it on your computer, of course without stealing anything.

Monica Ponzini: You declared that you find important going through the categories in your job, but that critics and publics judge applying categories. Do you think that this situation changed?

Cartsen Nicolai: I think there wasn’t any progress at all! Maybe is the way we deal with information. Look at Google: if you want to find something, you have to use keywords. There is a lot of information, but we need to know which is valuable and which is not, so we have to categorize them, otherwise we wouldn’t be able to use them. We need search engines, filters, but they work in categories. And these categories become more important.

Monica Ponzini: Beck realized Guero, a multimedia and interactive project. From a preview and mashups by fans online to a CD/DVD version with interactive video art, and then a remix, Guerolito. Now he thinks about customizable covers. Do you think interactivity will get more and more popular, less related to the world of experimentation?

Cartsen Nicolai: I’m not keen about these kind of projects. Sex years ago I did an interactive project in Japan for Canon Artlab, called Polar. The artwork was really beautiful, but we had a major problem: documenting this year-long project was too expensive and complex. Right now you can document interactive performances with the classical DVD, but it’s still something not remixable. A performance is completely different.

Monica Ponzini: And what about the Intrnet?

Cartsen Nicolai: Yes, we have the Internet, but I’m not interested at the moment. With interactivity, I feel like I don’t have control of the creative process and of the product, it was missing a result that I could totally agree with. Everything becomes arbitrary and I don’t have any desire of doing it. If it’s well done, interactivity can give beautiful results, but I think that now is a little overestimated. And talking about the piece in Japan : it involved a touch screen and we didn’t consider how much interactivity is connected with the game culture. When yu provide an interface, people think it’s a game and you’re trapped in that. For me, this is a big problem, I feel like I’m fighting against a huge, powerful industry.