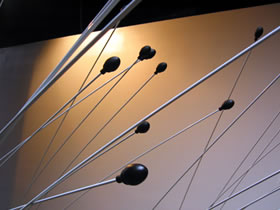 Mechanical creatures are always captivating, although digital culture seems to be directed toward visual, web semantic shifts, and informatics codes poetic and revolutionary linking. But we are talking about robots that keep on lasting and astonishing despite the success of immaterial dimension. Karel Capek ‘s offspring is increasingly numerous.

This time creatures are LemurBots . They are real talented music players: robots which can fly in the face of every great music player when it comes to fastness and precision. You could meet their creators in Milan if you came at MixedMedia , a great electronic culture event. Lemur ( League of Electronic Music Urban Robots ) are a Brooklyn-based big group of artists and engineers.

The work of art they presented at the hangar Bicocca event was ForestBots . This is an evocative interactive installation. It consists of 25 ten-foot stalks that gently arc up from bases on the ground. Each stalk has an egg-shaped rattle mounted at the free end. If solicited by visitors stems uttered different harmonic sounds according to these electronic branches mass and position. Differing masses of counterweights and positions on the stalk yield different harmonic excitations. A real robotic but poetic and spiritual forest.

But ForestBots is just one of the various Lemurbots projected by the Lemur collective. MIDI-controlled little and big robots are very adaptable and have a great sound variety. Let’s give some examples: GuitarBot , formed by 4 slide guitars, TibetBot based on the tones produced by three Tibetan singing bowls struck by six robotic arms, two per bowl, the shall-shaped !rBot including rattles uttering sounds when half-shells open or close. On the group web site you can see and listen to their acrobatic executions. This was just to give you an idea of the uniqueness of Lemur’s work.

The Brooklyn-based, founded in 2000 by the music player and engineer Eric Singer , includes a lot of talented people, such as programmers, video artists, composers, and music players even if the core of this group is formed by five people: Eric Singer , Jeff Feddersen , Milena Iossifova , Bil Bowen , and Luke DuBois .

The philosophy and purpose of Lemur group is apparently really simple. They want to build robotic musical instruments, which can “play themselves” and converse with real music players but above all, which can implement things that are impossible to human music players.

The Lemur group was engaged in its largest fabrication project to-date, creating custom robotics for Fernand Léger and Dudley Murphy’ s ” Ballet mécanique ,” first entirely-mechanical version, which was performed from March 12 th to 29 th , 2006 at the National Gallery of Art, Washington DC . George Antheil ‘s Ballet Mécanique performance has always created a lot of problems, related to the score execution troubles and the various  and odds  instruments synchronization. Lemur group was asked to solve this age-old problem by means of its mechanical creatures. So the Antheil’s dream to have an orchestra, which could completely execute his extraordinary score  mixing industrial era sounds and atonal jazz music  could be attained. This task seemed to be designed just for Lemurs.

Let’s deepen some aspects of their work. We interviewed Eric Singer (from Brooklyn) and Jeff Feddersen (from Milan).

Teresa De Feo: Let’s start from ForestBots, the installation you presented at MixedMedia. This is your first robot interacting with the audience. Was interactivity an accidental choice or do you intend to go for interactivity for your next works?

LEMUR _ Eric: By now most of our installations are interactive ones. For instance, our next installations will be exposed at the Schenectady Museum in New York and visitors will have the possibility to control, interact with and play with robots.

LEMUR _ Jeff: The technical implementation character of Lemur’s works exposes them to different future installing situations and  as Eric said  the investigation of various interactive possibilities is one of these situations. Anyway with ForestBot interactivity came from this assumption: we wanted to create something the audience would appreciate so it had to be neither too simple nor too complex. Also considering the fact the audience time to “experience” a work of art at an art gallery could be limited.

Teresa De Feo: Most of your bots, as for example TibetBot, !rBot, and ForestBot include natural and spiritual semantic elements. Robotic and technology versus nature and spirituality. What is in your philosophy the common ground of these two expressions?

LEMUR _ Eric: Some artists of our group can individually use these elements to get inspiration, but our philosophy is generally to create robotic instruments that play well, look good and implement new techniques in music creation.

LEMUR _ Jeff: This is just a way to look at nature as a complex system formed by simple elements. The power and variety of nature comes out from the interaction of single elements basic instructions. This is the model I like to refer to in my approach with robotics and computer language. I also get my inspiration from a sort of natural scale: the hugeness and slowness of nature. I tried to transfer this in ForestBots.

Teresa De Feo: It seems your music robots are aimed at overcome the limits of the relationship between the musician and his instrument. What’s your boldest dream about it?

LEMUR _ Eric: This is true in a measure but we are not essentially trying to overcome human limits, that is, to extend human ability. Humans and robots do different things. Robot musical instruments only represent an opportunity for composers and musicians to create new things.

LEMUR _ Jeff: This is an essential matter. I’m a musician and I play music even with non-robotic and non-electronic instruments. Music instruments have always been a perfect tool in the service of art. I don’t think the intrinsic limits a music instrument could have inhibit creativity freedom. On the contrary I think these limits could help. We could reflect on the peculiar problems of the relationship between the musician and his instrument, which helps him to pull his expressive qualities out. So my music robots are not aimed at realizing superior performances  speed, bigger sound size etc. As a matter of fact, in the building up of Forestbots I closely coped with the limits of mechanical instruments. Even if the mechanical part of our work is reasonably simple, the movement of flexible parts can’t absolutely be controlled; there are slight movements I can only direct by hand, that is behaviours that can’t be programmed.

But surely there are things a machine can do that are very difficult to realize in another way. A machine can work at an art gallery or on an installation for a very long period. I can turn ForestBots on and walk in the midst of its stems surrounded by the sound produced by their movement in the air. I can be the audience of my own music.